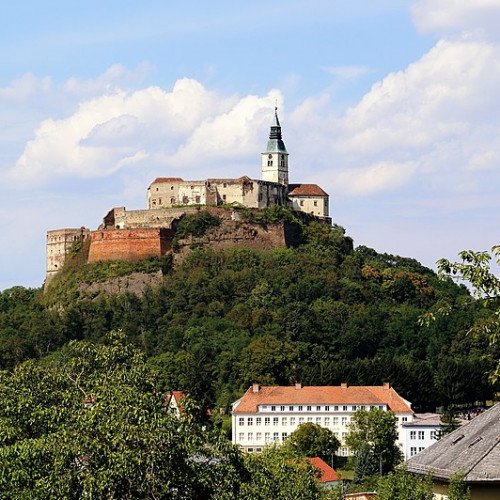 Güssing Castle (German: Burg Güssing, Hungarian: németújvári vár) is a castle in southern Burgenland, Austria. On June 30, 1524, the castle was acquired by the Batthyány family, which retains ownership through a historical foundation that provides for the care and maintenance of the castle. Güssing Castle is 293 metres (961 ft) above sea level. Established by Béla III of Hungary around 1180, Güssing Castle is the oldest castle in Burgenland. Wolfer, a German knight, who arrived to the Kingdom of Hungary during the reign of Géza II, founded a Benedictine monastery on the top of the mountain Güssing (or Küszén) in 1157. Contrary to the narrations of the medieval chronicles, he did not erect a wooden castle there; the establishing charter also emphasizes the mount of Küszén was an "uninhabited wasteland" before the erection of the abbey. After a few decades of its operation, Béla III confiscated the abbey from the Benedictine friars and used the abbey's stone buildings to erect a royal castle (Novum Castrum or Újvár, "New Castle", later Németújvár, "German's New Castle", today Güssing Castle) on top of the hill around 1180. By that time, the tense relationship between Hungary and the Holy Roman Empire were emerged, as Béla supported the papacy against Frederick I, Holy Roman Emperor during the Investiture Controversy. The Hungarian king also had conflicts over border disputes with the Duchy of Austria in the second half of the 1170s. Under such circumstances, the mountain of Küszén and its fortified abbey proved to be a strategic military site along the border with Austria. The castle is first mentioned by contemporary records in 1198. According to historian Richárd Horváth, the castle was called Újvár, because the proximity of the castle of Pinkaóvár (or simply Óvár, "Old Castle", present-day part of Hannersdorf in Austria), which was the oldest motte-and-bailey castle in the region. 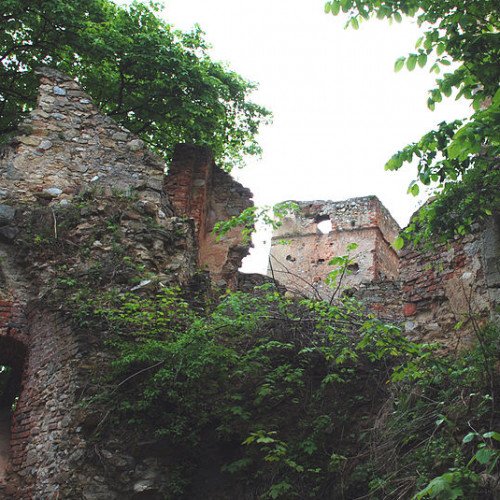 Burgruine Landsee is a castle ruin in the Austrian state of Burgenland. Burgruine Landsee is 537 metres (1,762 ft) above sea level. The castle was used as a location for Disney's The Three Musketeers (1993 film) starring Kiefer Sutherland, Charlie Sheen, Chris O'Donnell, and Oliver Platt.