"HARE AND TORTOISE" vs "MISSISSIPPI QUEEN" 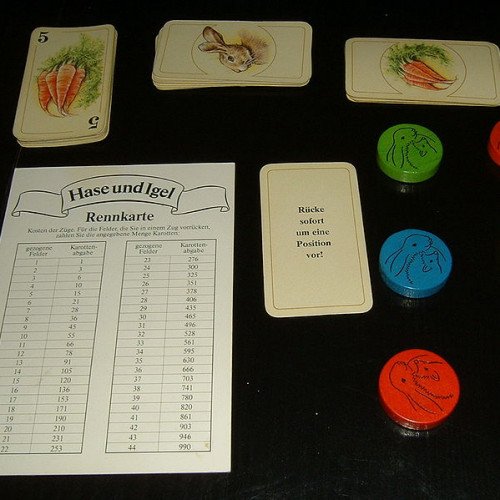 Hare and Tortoise is a German-style board game designed by David Parlett in 1974 and first published by Intellect Games. In 1978 it was released by Ravensburger in Germany, where the game became a huge hit. It has since sold some 2 million units in at least ten languages, including several known pirated editions. The current edition is published by Gibsons Games in the UK, Ravensburger in Germany and Rio Grande Games in the United States. The game is based on Aesop's fable "The Tortoise and the Hare", in which the hare and tortoise decide to race. The tortoise wins the race by cunning while the hare fails because he overestimates himself and takes a nap during the race. The moral of the story is "slow and steady wins the race" which is incorporated in the game mechanic. In Germany, there is another fable by a similar name, Hase und Igel (Hare and hedgehog), made popular by the Brothers Grimm, in which the hedgehog wins because his wife is at the finish line, and the hare mistakes her for his race opponent. The game used a then-new (as of 1974) game mechanic. Until then, movement of pieces in race games was largely determined by the roll of dice. In Hare and Tortoise players pay carrots (the currency in the game) to move forward. The more squares the player wants to advance, the more carrots the player must pay. The cost to advance increases as triangle numbers: 1 square = 1 carrot 2 squares = price of 1 square + 2 = 3 carrots 3 squares = price of 2 squares + 3 = 6 carrots 4 squares = price of 3 squares + 4 = 10 carrots And so on. Players can earn carrots in various ways – most notably by moving backwards to designated squares (10 carrots per square). This game mechanic creates an interesting and dynamic race usually with no clear winner until the very end. The players start the game with 65 carrots. The gameboard features 65 squares. There are no generic squares; instead, the board is divided in several types of squares such as hare (draw a luck card), carrots (get extra carrots for each turn skipped), etc. The factor of luck can be eliminated completely from the game by agreement between the players not to land on "hare" squares. Only one earlier "strategic race game" is known: Bantu, published by Parker Brothers in 1955 which, however, did not serve as a model for Hare and Tortoise. 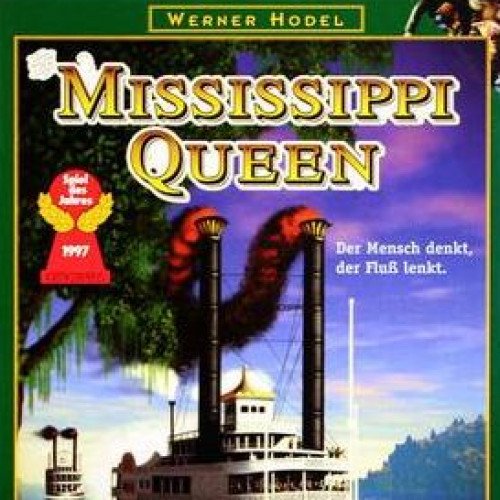 Mississippi Queen is a 1997 designer board game by Werner Hodel. It is within the genre of race games, where players control a Mississippi Steamboat, by managing speed, fuel, maneuverability and passengers while trying to reach the destination the quickest. The reviewer from the online second volume of Pyramid stated that "Based on paddle wheel ship racing in the late 1800s, the game is a fast playing and simple to learn game for the entire family. And not in a bad way." It won the 1997 Spiel des Jahres.