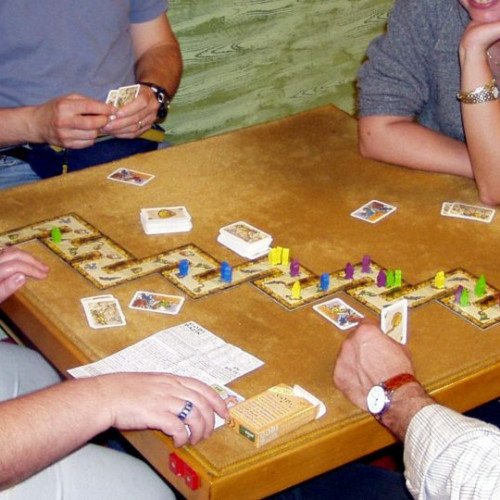 Cartagena is a German-style board game released in 2000, that takes as its theme the 1672 pirate-led jailbreak from the dreaded fortress of Cartagena. With its very simple concept, this game of strategy gives each player a group of six pirates and the objective is to have all six escape through the tortuous underground passage that connects the fortress to the port, where a sloop is waiting for them. The first player to move all of his or her pirates from the Cartagena prison to the sloop is the winner. The game board and its pieces were designed by Leo Colovini and drawn by artists Christoph Clasen, Claus Stephan, Didier Guiserix, Martin Hoffmann, and Studio Tapiro. The board itself is made up of six double-sided sections, each of which has a different permutation of the same six pictures: daggers, pirate hats, pistols, bottles of rum, skulls, and skeleton keys. These six sections can be combined in any order, to make thousands of different games (although nowhere near as many as the 7206 combinations theoretically possible). Each player is dealt six cards out of a set of 102: 17 cards for each of the six pictures. Each also begins the game with six pirates, represented by solid-coloured, wooden figures. Colour choices include brown, red, yellow, green, and blue. The player who looks most like a pirate goes first, with gameplay proceeding in a clockwise direction. 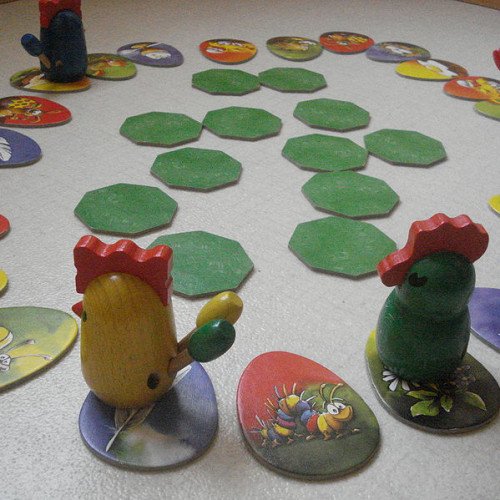 Chicken Cha Cha Cha (original German name: Zicke Zacke Hühnerkacke) is a board game for two to four players from four years onwards. It was designed by Klaus Zoch and self-published. It was illustrated by Doris Matthäus. The game was awarded the special prize for children's games in the Spiel des Jahres competition in 1998. The game consists of 24 egg-shaped plates with twelve pictures of chickens, rabbits, hedgehogs, flowers and other things to be found at a henhouse, two plates of every design, and twelve octagonal plates with the same illustrations as the egg-shaped plates. These octagonal plates are placed in the centre of the board, face down, and shuffled. The egg-shaped plates are then shuffled and placed in a ring around the octagonal plates, face up. Each player gets a specifically coloured chicken, which has a tail feather of the same colour. The chickens are placed at equal distances on the ring around the board. On a player's turn, he/she chooses one of the octagonal plates and turns it face up. If it's the same illustration as on the egg-shaped plate in front of the player's chicken, the chicken moves to that plate and the player's turn continues. If it's a different illustration, the player's turn ends. The octagonal plates are then turned back face down. If a player's chicken is directly behind another player's chicken, he/she must find the illustration in front of the other player's chicken. If this succeeds, his/her chicken jumps over the other player's chicken and takes all of its feathers. The player who first gets all feathers of every chicken wins the game. The game is based on Concentration and is thus suitable for both children and adults, especially after the third or fourth round.