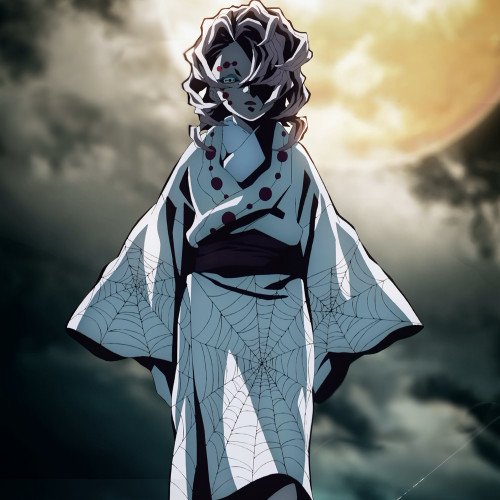 Rui (累るい Rui?) is the primary antagonist of the Natagumo Mountain Arc of Demon Slayer: Kimetsu no Yaiba. He is also a member of the Twelve Kizuki,[2] having held the position of Lower Rank 5 (下か弦げんの伍ご Kagen no Go?). Rui has the appearance of a young boy. His skin is white, with red dots. His hair is light pink and bears resemblance to spider legs. The sclera of his eyes are red, while his irises are pale blue. Due to holding the position of Lower Rank 5, Rui has the kanji of Lower Rank (下か弦げん Kagen?) and Five (伍ご Go?) engraved into his left eye, signifying his ranking of Lower Rank Five As a human, he possessed normal black hair styled with the same spider-leg like haircut, with bright blue eyes. On general basis, Rui is a quasi-calm individual, rarely raising his voice, and talking with everyone, demon or slayer, with a reasonable tones and vocabulary, though his low and guttural tones constantly imply repressed anger and annoyance. Every time he spoke with Tanjiro during their duel he remained somewhat civil in speech, never once insulting him or calling him a name. Rui was a disturbed individual who desired the close bonds that a family has and expected family members to perform their own roles. To him, "family members" who do not perform their roles as he expects them to (namely to protect Rui unconditionally or follow his instructions) are worthless and as good as dead. Despite the fact he yearns for a "family", his vision of one is incredibly twisted and founded on nothing but fear of him, instilled through repeated abuse on his fellow kin, which he does with unrepentant sadism. Well aware of his power, he is incredibly authoritarian and cruel and has no qualms about mistreating others or punishing his "family" by stringing them up and leaving them to be burned by the sun when they go against his wishes. Because of his strength, he tends to act almighty and confident, although this arrogance, while hardly unfounded, does not blind him to potential threats to his life. Further, he is aware on some level that, despite telling Tanjiro when he saw Rui punishing Spider Sister that he wasn't watching a play, that his whole family is a sham, yelling at Spider Sister that none of his family member were able to fulfill their roles, or fill the void in his heart. 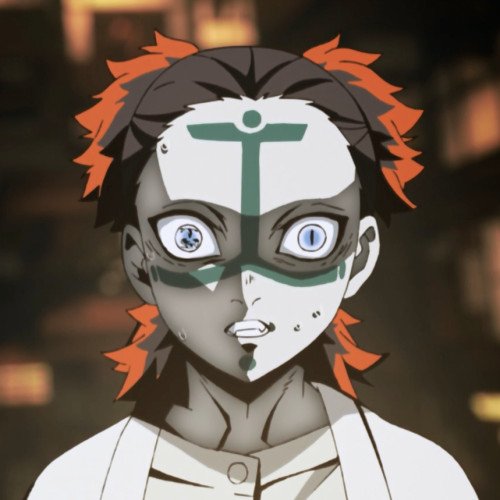 Kamanue (釜かま鵺ぬえ Kamanue?) was a member of the Twelve Kizuki, having held the new position of Lower Rank Six (下か弦げんの陸ろく Kagen no Roku?). Kamanue was a short young man with incredibly pale skin, his face decorated by a thick line of dark green under both of his eyes and across his nose that ran up vertically into another, shorter horizontal line on his forehead. Four large dots were also placed at the far ends of the line on his cheeks, the middle of the one on his forehead, and below his lower lip. His eyes were cat-like in shape, the pupils slit and the irises pale blue with a white ring around the sides, the kanji for "Six" engraved onto the one on his right. Kamanue also possessed dark brown hair with bright orange tips that was worn swept back but fluffed out on either side of his head and neck. He wore a white haori with a yellow scale pattern down the sleeves, as well as a white button-up shirt and dark hakama pants. Kamanue was a very on-edge individual who constantly wore a scared expression, which is likely to do with the fact that he felt weak and yielding as the lowest of the Lower Ranks. He appeared to be constantly skittish during his short time at the Infinity Castle, suggesting a nervous personality.