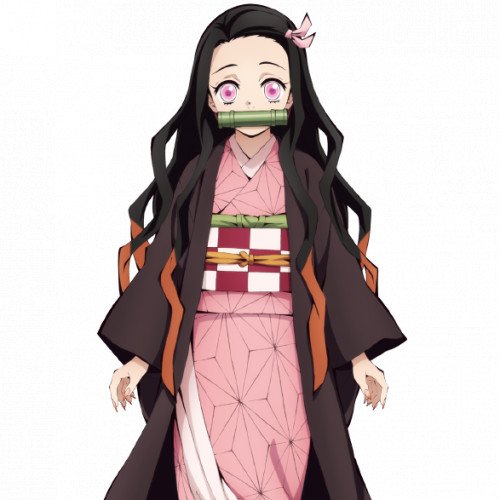 Nezuko Kamado (竈門かまど 禰ね豆ず子こ Kamado Nezuko?) is one of the main protagonists of Demon Slayer: Kimetsu no Yaiba, the younger sister of Tanjiro Kamado and one of the two remaining members of the Kamado family. Formerly a human, she was attacked and turned into a Demon by Muzan Kibutsuji. Nezuko is a petite young girl with fair skin, visibly large, prominent fangs, and sharp, claw-like nails that fade to red where they point. Her hair is long, black and reaches just below her waist, turning a flame-orange color as it passes her elbows, and appears to be crimped into large, straight ridges, worn side-swept drastically to her left. She has soft-looking, pale pink eyes that appear a lighter color around the rims of their irises, slanted downwards towards the sides of her face and framed by notably long eyelashes, the pupils of which can appear slit as she transforms. According to Tanjiro Kamado, Nezuko was known as a great beauty in their home town.[4] She wears a light pink kimono with a hemp leaf pattern, the lining a paler pink, with a red and white checkered obi and a thin piece of orange thread looped and knotted around her waist, with another band of green above it. Over this, she sports a long, dark brown haori that reaches past her knees, as well as pink zori sandals and white socks, wrapped with thick pieces of black material. Nezuko also wears a small pink ribbon to the left of her head, to keep her hair out of her face, and the bamboo gag Giyu Tomioka gave her,[5] which is secured around her jaw with a strip of red cloth. 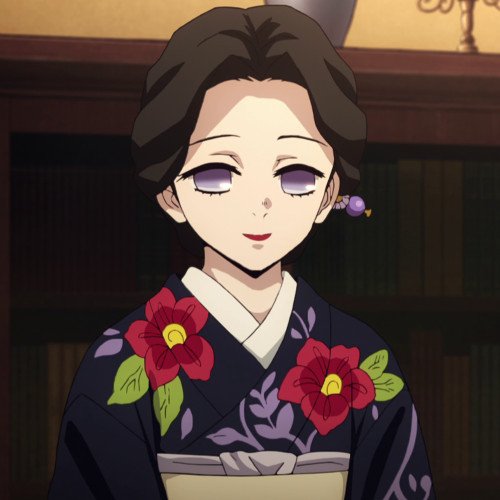 Tamayo (珠たま世よ Tamayo?) is a skilled doctor and close ally of Tanjiro Kamado. Muzan Kibutsuji turned her into a Demon. Tamayo takes the form of a beautiful woman with long, dark brown hair, parted in the center and worn braided back into a large, low bun, which is held in place by a floral hairpin. She has large, gentle eyes that do not possess pupils, only a haze of lavender that fades to dark purple the higher it goes, and notably red lips in contrast to her pale complexion. Tamayo wore a dark purple kimono that was decorated with wavy pale purple tree branches and red flowers, and a cream-colored obi to secure it around her waist, as well as plain white socks and violet zōri sandals. Before in her past, Tamayo wore her hair tied in a low ponytail and had stilted pupils.