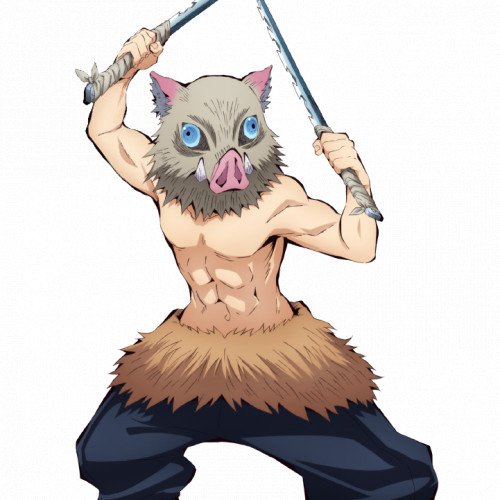 Inosuke Hashibira (嘴はし平びら 伊い之の助すけ Hashibira Inosuke?) is one of the main protagonists of Demon Slayer: Kimetsu no Yaiba and a traveling companion of Tanjiro Kamado. He is also a Demon Slayer in the Demon Slayer Corps. Inosuke is a young man of average height and pale complexion with an extremely toned and muscular build for his age, possessing large, defined muscles most notably over his stomach and arms. In sharp contrast to this, he has an incredibly pretty and feminine face,[3] with large, wide eyes that are framed by an array of long eyelashes, their irises a dark to soft pale green, thin eyebrows and what could be a small, well-mannered mouth. His thick, black hair reaches just past his shoulders, fading into blue at the tips and forming an unruly and uneven fringe that falls just above his eyes, puffing out before curving and thinning towards his forehead. Inosuke wears his altered version of the standard Demon Slayer uniform, which consists only of the baggy hakama pants, his tinted a dark gray-blue, which he fastens around his hips with a thick belt of fluffy brown animal fur. The usual cloth leg-wraps are replaced with what appears to be knee-high socks of a furry hide which expose his heels and toes, which also appear to be what fastens the sandal-bases he wears on his feet. His most defining feature is the gray, hollowed-out boar's head he wears as to mask his own, the eyes of which he has tampered with to allow himself vision while wearing it,[4] which has been revealed to have belonged to his late adoptive boar mother. 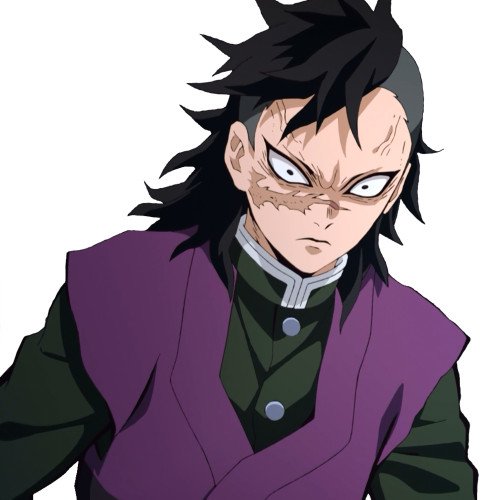 Genya Shinazugawa (不死しなず川がわ 玄げん弥や Shinazugawa Gen'ya?) is a major supporting character of Demon Slayer: Kimetsu no Yaiba. He is a Demon Slayer in the Demon Slayer Corps and also the younger brother of the Wind Hashira, Sanemi Shinazugawa. At the time of his debut during the Final Selection, Genya was a short, young man with large, inward-slanting eyes. The space where his eyebrows would've been is constantly furrowed, which gave him a permanently angered appearance. His hair is styled into a buzz cut, with only a small clump of messy black hair left to grow on the top of his head. He also possessed a large, jagged scar that ran over his right cheekbone from his ear and to over his nose. During his first appearance, Genya is seen wearing a purple, sleeveless yukata over a plain black shirt with long sleeves. Later on, when seen again in the Butterfly Mansion, Genya had a much more feral appearance, having undergone a growth spurt that put him at almost six feet tall. His hair is also much longer, worn in more of a mohawk style, the strands much longer and visible around his neck. It is also noted that he became more muscular and gained many more scars all over his body.