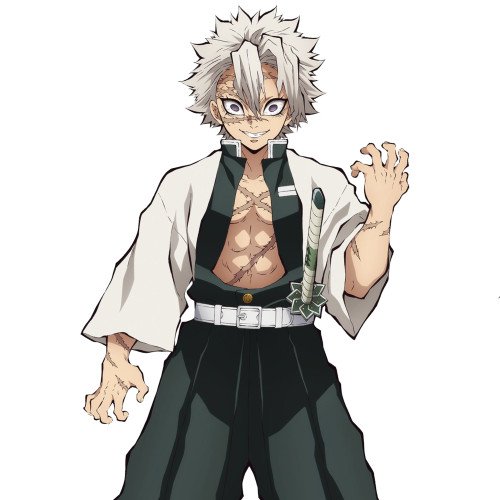 Sanemi Shinazugawa (不死しなず川がわ 実さね弥み Shinazugawa Sanemi?) is a major supporting character of Demon Slayer: Kimetsu no Yaiba. He is a Demon Slayer of the Demon Slayer Corps and the current Wind Hashira (風かぜ柱ばしら Kaze Bashira?). Sanemi lived in a family of roughly half a dozen siblings, including his younger brother, a Demon Slayer, Genya Shinazugawa. Unfortunately, his mother was accidentally turned into a Demon and murdered all of Sanemi's siblings except Genya, and as the oldest child, he took it upon himself and ended his mother's life. Afterwards, he was found by a Demon Slayer by the name of Masachika Kumeno and introduced to a Wind Breathing cultivator, and together they defeated the former Lower Rank 1, Masachika dying in the process and Sanemi alone becoming a Hashira. 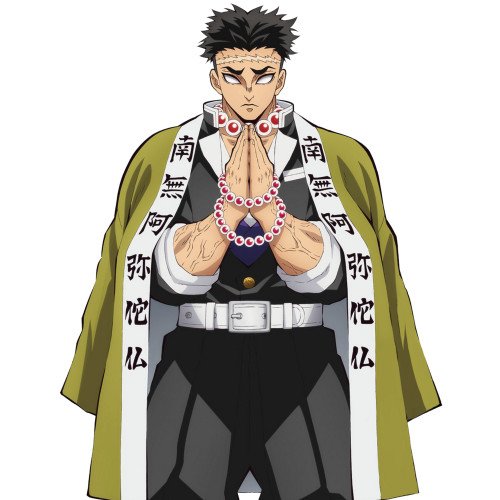 Gyomei Himejima (悲ひ鳴め嶼じま 行ぎょう冥めい Himejima Gyōmei?) is a major supporting character of Demon Slayer: Kimetsu no Yaiba. He is also a Demon Slayer and the Stone Hashira (岩いわ柱ばしら Iwa Bashira?) of the Demon Slayer Corps. He also serves as the mentor of Genya Shinazugawa. Gyomei is a hulking figure among the Demon Slayers. He is one of the tallest characters in the series, easily towering over his fellow Hashira. He is powerfully built and extremely muscular. He has spiky black hair and a prominent scar running horizontally across his forehead. Having been blind since childhood, he has white eyes with no visible irises or pupils. His eyes frequently tear-up when he gets emotional. Gyomei wears the black and white uniform typical of a Demon Slayer, with an olive green happi draped over his shoulders. He also sports a large-beaded necklace around his neck and carries ojuzu when he is not engaged in battle.