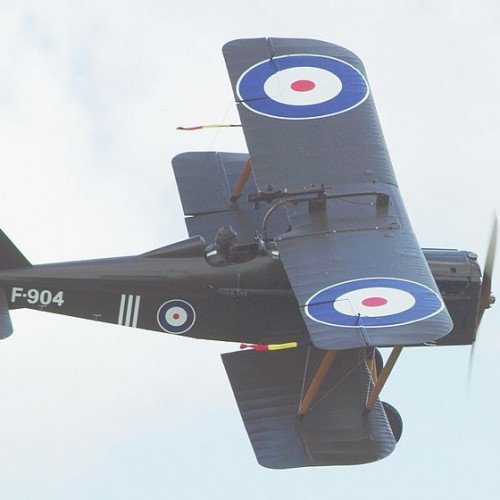 The Royal Aircraft Factory S.E.5 was a British biplane fighter aircraft of the First World War. It was developed at the Royal Aircraft Factory by a team consisting of Henry Folland, John Kenworthy and Major Frank Goodden. It was one of the fastest aircraft of the war, while being both stable and relatively manoeuvrable. According to aviation author Robert Jackson, the S.E.5 was: "the nimble fighter that has since been described as the 'Spitfire of World War One'".In most respects the S.E.5 had superior performance to the rival Sopwith Camel, although it was less immediately responsive to the controls. Problems with its Hispano-Suiza engine, particularly the geared-output H-S 8B-powered early versions, meant that there was a chronic shortage of the type until well into 1918. Thus, while the first examples had reached the Western Front before the Camel, there were fewer squadrons equipped with the S.E.5 than with the Sopwith fighter. Together with the Camel, the S.E.5 was instrumental in regaining allied air superiority in mid-1917 and maintaining it for the rest of the war, ensuring there was no repetition of "Bloody April" 1917 when losses in the Royal Flying Corps were much heavier than in the Luftstreitkräfte. The S.E.5s remained in RAF service for some time following the Armistice that ended the conflict; some were transferred to various overseas military operators, while a number were also adopted by civilian operators. 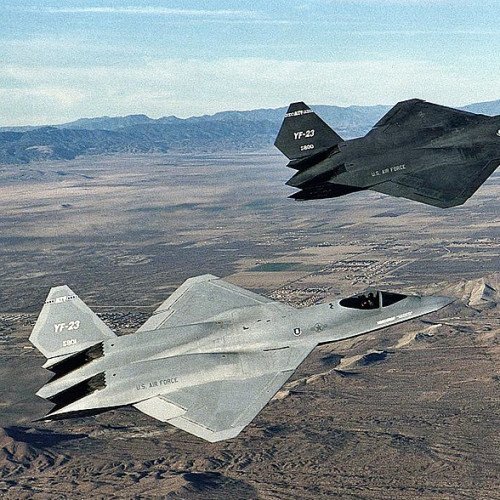 The Northrop/McDonnell Douglas YF-23 is an American single-seat, twin-engine stealth fighter aircraft technology demonstrator designed for the United States Air Force (USAF). The design was a finalist in the USAF's Advanced Tactical Fighter (ATF) competition, battling the Lockheed YF-22 for a production contract. Two YF-23 prototypes were built, nicknamed "Black Widow II" and "Gray Ghost". In the 1980s, the USAF began looking for a replacement for its fighter aircraft, especially to counter the USSR's advanced Sukhoi Su-27 and Mikoyan MiG-29. Several companies submitted design proposals; the USAF selected proposals from Northrop and Lockheed. Northrop teamed with McDonnell Douglas to develop the YF-23, while Lockheed, Boeing and General Dynamics developed the YF-22.