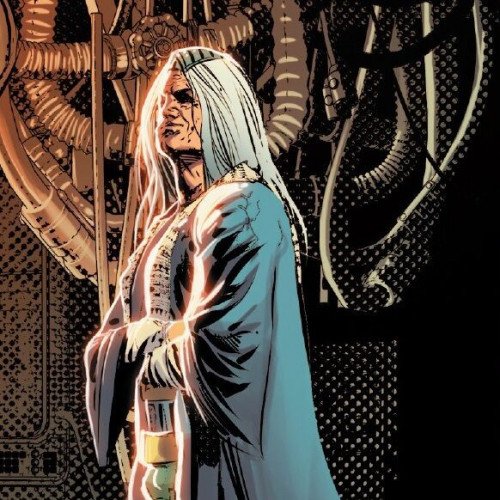 A'Lars was born in the Eternals' original Earth capital, Titanos, to Kronos and Daina. His brother was Zuras. A'Lars became a scientist like his father. Mentor is regarded as a man who has learned great wisdom over his long life and he employs it well.[1] Following the death of their father, A'Lars and Zuras held the first Uni-Mind to determine which of them would rule the Eternals of Earth. Though A'Lars was well-loved, Zuras won the people's favor. Knowing that remaining on Earth would spread disorder, as the rivalry between his father and his uncle Uranos once had, A'Lars exiled himself to space.[3] Eternals of Titan On the moon Titan he found Sui-San, the sole survivor of the exiled followers of Uranos. With her, he founded the Eternals of Titan and took the new alias Mentor. They began to repopulate the Titan colony,[1] using genetic engineering and cloning,[4] and it grew into a paradise. They created I.S.A.A.C., an immense computer system that could monitor and maintain all of the life support functions of the inner world.