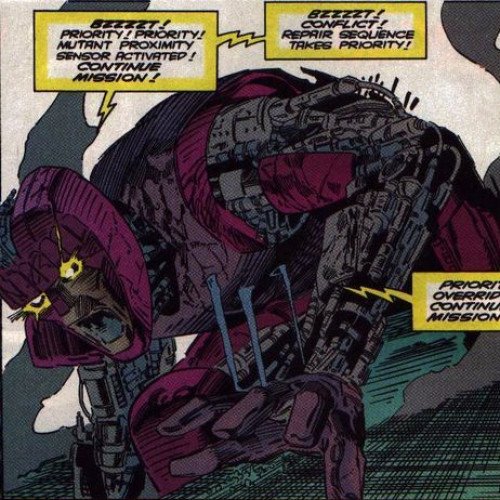 The Sentinel that would name itself 3.14159 was one of the Sentinels brought to Earth-616 by the time traveler Trevor Fitzroy of Earth-1191. As part of the "game" he was playing with the Upstarts, Fitzroy sent his Sentinels to murder the Reavers, and their leader Donald Pierce.[1] This Sentinel was severely damaged and shut down, and constantly doused in the bio-mechanical fluid that Pierce had used to create his cyborgs and androids. Later when Wolverine and Jubilee went to the Reavers headquarters to investigate on orders from Professor X they accidentally reactivated the Sentinel.[2] Having become sentient due to its exposure to the bio-mechanical fluid, it determined that it should act in the best interest of Sentinel kind and decided to wipe out all of humanity. Using a time warp to transport itself (along with Wolverine and Jubilee) to the Anthill, the base of the now deactivated Sentinels built by Larry Trask, it built a device that would cause a solar flare and eradicate all human life on the Earth.