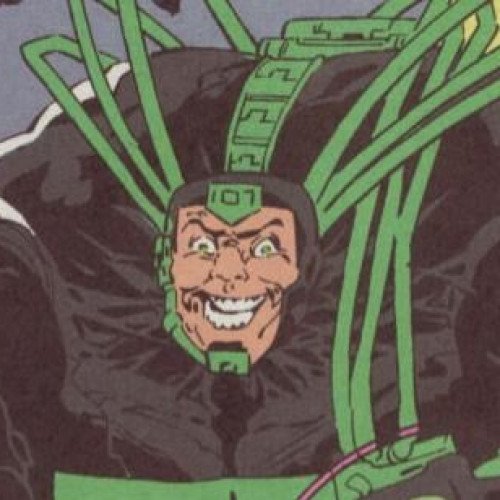 107 was one of over a hundred runaways abducted by the Adrenamix Corporation (a subsidiary of the Gaulthing Corporation). Adrenamix subjected their prisoners to psionic experiments, which led to a wide variety of superhuman powers. 107 developed prodigious size and strength. President and CEO Anderson Gaulthing referred to this batch of test subjects as the "Psigns of the Times". One of the Psigns was his own daughter, Alison Gaulthing. Alison attempted to escape from the Adrenamix facility and the Psigns were sent to retrieve her. They chased her across a rooftop near Yancy Street, but Alison died while trying to evade capture. 107 and the others began to fear that they would be blamed for her death. Investigating the Adrenamix activities was the New Warrior known as Justice. Justice fought against the Psigns and 107 attempted to take him down by ramming him, but Justice easily deflected the attack. The Psigns all had tubes running into the back of their heads, as well as packs and tubes running into their arms, indicating that they were receiving some sort of chemical or energy feed. Their abilities are apparently psionic in origin, though exactly how that works is unclear. 107 is the big, strong guy, and it's unclear just how strong he is. He could crush a wall by running into it, and seemingly shatter any machinery with a single punch. Class 10-25, perhaps.