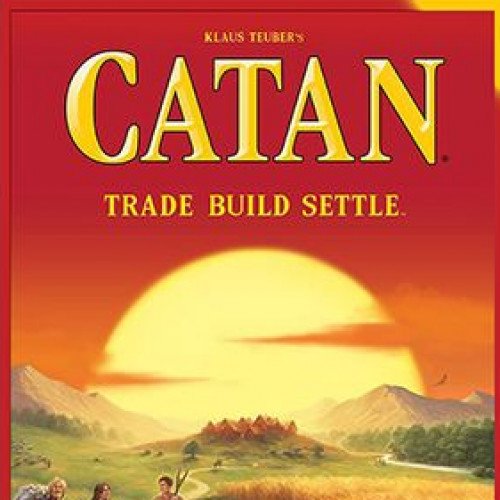 Catan, previously known as The Settlers of Catan or simply Settlers, is a multiplayer board game designed by Klaus Teuber. It was first published in 1995 in Germany by Franckh-Kosmos Verlag (Kosmos) as Die Siedler von Catan. Players take on the roles of settlers, each attempting to build and develop holdings while trading and acquiring resources. Players gain points as their settlements grow; the first to reach a set number of points, typically 10, wins. The game and its many expansions are also published by Catan Studio, Filosofia, GP, Inc., 999 Games, Κάισσα, and Devir. The Settlers of Catan became one of the first German-style board games to achieve popularity outside Europe. As of 2015, more than 22 million copies in 30 languages had been sold. The players in the game represent settlers establishing settlements on the island of Catan. Players build settlements, cities, and roads to connect them as they settle the island. The game board, which represents the island, is composed of hexagonal tiles (hexes) of different land types, which are laid out randomly at the beginning of each game. Newer editions of the game began to depict a fixed layout in their manual, which has been proven by computer simulations to be fairly even-handed, and recommend this to be used by beginners. In 2016, editions of the game were released with a conventional fixed layout board in this configuration, the hexes of which cannot be rearranged. Players build by spending resources (sheep, wheat, wood, clay, and ore) that are depicted by these resource cards; each land type, with the exception of the unproductive desert, produces a specific resource: hills produce brick, forests produce wood, mountains produce ore, fields produce wheat, and pastures produce sheep. On each player's turn, two six-sided dice are rolled to determine which hexes produce resources. Players with a settlement adjacent to a hex containing the number just rolled receive one card of the corresponding resource; cities produce two cards of the corresponding resource. For example, if a player has one city and two settlements adjacent to a grain hex, that player would take four grain resource cards if the corresponding number was rolled. There is also a robber token, initially placed on the desert; if a player rolls 7, the robber must be moved to another hex, which will no longer produce resources until the robber is moved again. That player may also steal a resource card from another player with a settlement or city adjacent to the robber's new placement. In addition, when a 7 is rolled, all players with 8 or more resource cards must discard their choice of half of their cards, rounded down. For example, If a player has 9 resource cards, and a 7 is rolled, the player must get rid of 4 cards. On the player's turn, the player may spend resource cards to build roads, settlements, upgrade settlements to cities (which replace existing settlements), or development cards. Players can trade resource cards between each other; players may also trade off-island (in effect, with the non-player bank) at a ratio of four-to-one resource for one of any other. By building settlements adjacent to ports, players may trade with the bank at three-to-one (three of any single resource type) or two-to-one (two of a specific resource) ratios, depending on the port's location. The goal of the game is to reach ten victory points. Players score one point for each settlement they own and two for each city. Various other achievements, such as establishing the longest road and the largest army (by playing the most knight cards), grant a player additional victory points. 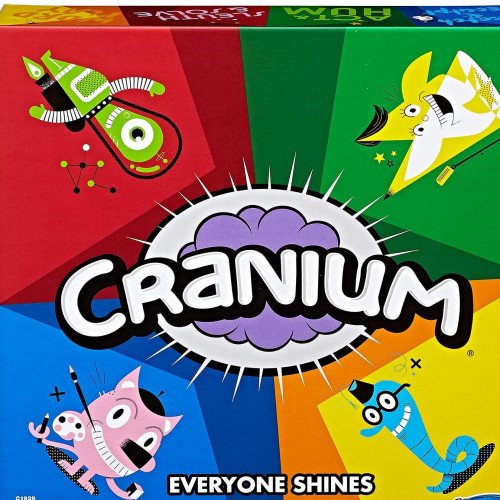 Cranium is a party game created by Whit Alexander and Richard Tait in 1998. Manufactured by Hasbro subsidiary Cranium, Inc., it is billed as "The Game for Your Whole Brain". Unlike many other party games, Cranium includes a wide variety of activities. Giorgio Davanzo handles packaging and branding for the game, and the artwork is by cartoonist Gary Baseman. The board is laid out as a circuit, consisting of four equally split colored spaces. Each color corresponds to a question card category that players must pull from on their turn. The purple "Planet Cranium" space gives the team their choice of category. Red is "Fun Facts", green is "Act & Hum", blue is "Sketch & Sculpt" and yellow is "Word Puzzles".