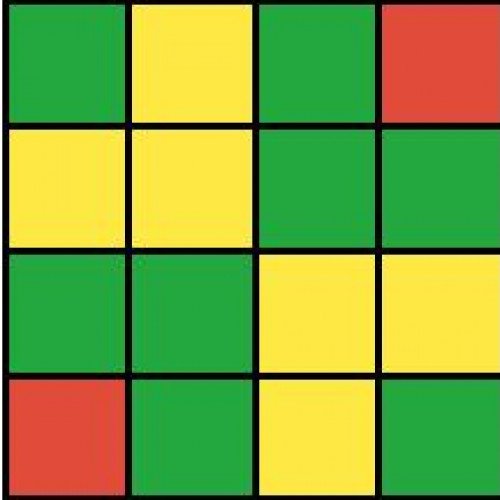 Continuo is an abstract strategy game by Maureen Hiron first published in 1982 and now distributed in board game form by David Westnedge Ltd. It is played by arranging patterns printed on a deck of 42 cards, each card being printed with a grid of 16 colored squares. The goal is to place cards so that the tiles match as many chains of color as possible. Continuo won a 1995 Mensa Select games award.The tag line on the box is "The one rule game for all the family". Versions of the game have also been published in which the same basic rule is used, but the tiles are triangular or rhombic rather than square and the hexagonal domino type game Hexago was also marketed under the continuo name. Continuo was endorsed by Omar Sharif. There has been a Continuo tournament at the Mind Sports Olympiad since 1997, to determine the world champion. Continuo consists of 42 tiles. These tiles are subdivided into a 4 × 4 grid of small squares. All of the tiles are diagonally symmetrical with an L-shape of one colour with a single small square of another in the corner. There are 4 colours in total: red, green, blue and yellow. The aim of the game is to score points by making 'chains' of colour and a point is scored for the length in small squares of each chain that the placed tile makes. A chain has to be squares that touch horizontally or vertically. Maureen Hiron also held the world championships for another of her games; Hexago, or Hexago Continuo. Although being a tile game branded with the same name as Continuo, it is only the immediately touching tiles that effect the score as opposed to the chains in continuo. It is a game with hexagonal tiles split into 6 triangles each with a colour and a number. Each time a tile is placed touching so that it matches either the segments colour or number points are scored. 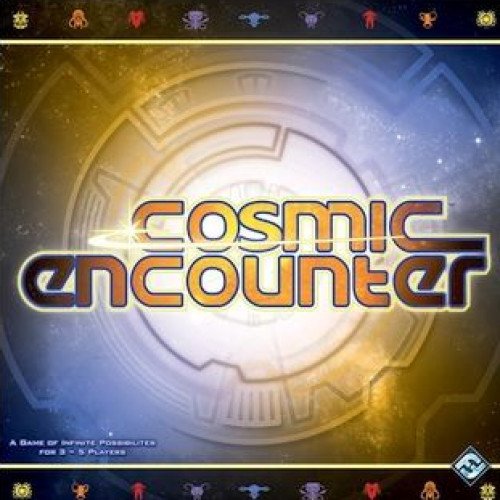 Cosmic Encounter is a science fiction–themed strategy board game designed by "Future Pastimes" (collectively, Peter Olotka, Jack Kittredge and Bill Eberle, with Bill Norton) and originally published by Eon Games in 1977. In it, each player takes the role of a particular alien species, each with a unique power to break one of the rules of the game, trying to establish control over the universe. The game was inducted into the Academy of Adventure Gaming Arts & Design Adventure Gaming Hall of Fame in 1997. Cosmic Encounter is a dynamic and social game, with players being encouraged to interact, argue, form alliances, make deals, double-cross, and occasionally work together to protect the common good. Most editions of the game are designed for three to five players, although official rules exist for playing with as many as eight players. Cosmic Encounter is based on a fixed set of rules which are subsequently modified by other elements of the game. Each player begins with a color-coded "home system" containing five planets, and twenty ships (formerly referred to as "tokens") representing starships that populate these planets as "colonies" (formerly known as "bases"). A central "warp" is used to place defeated ships for all players. The object of the game is to establish colonies on five planets outside one's home system. Each player is dealt a hand of eight (or seven, depending on the edition) cards from the "cosmic deck," which includes three types of cards: Encounter cards (numbered Attack cards) and Negotiate (formerly Compromise) cards), Reinforcement cards, and Artifact (formerly "Edict") cards. The turn player is referred to as the "offense." On a player's turn, they retrieve one ship from the warp, and then draw a card from the "Destiny" deck, containing color-coded cards which indicate which player's system they must attack; the player who owns this system becomes the "defense." Using a special "hyperspace gate" (formerly "hyperspace cone" or simply "cone") indicator, the offense selects which opponent on which planet to attack, and then places from 1 to 4 ships on the gate; the defense simply defends with however many ships he has on the targeted planet. Both the offense and defense can ask the other players individually to ally with their side; each invited player may commit up to 4 ships to either side of the conflict. Once allies have committed, the offense and defense both select encounter cards from their hands to place face-down, then reveal them. If both cards are Attack cards, the total of the attack value and number of allied ships are added for both sides, and the side with the larger value wins with the defending player winning in case of ties. All players involved in the encounter may play Reinforcement cards from their hands to add numerical bonuses to each side's forces. If the offense's side wins, the defense's colony is lost and all ships on the defense's side are sent to the warp, while the offense and their allies land their ships on that planet, establishing new colonies on it. If the defense's side wins, all ships on the offense's side are sent to the warp, and defensive allies gain a reward of either a ship from the warp or a new card from the deck for each ship risked. If both players use Negotiate cards, they have one minute to make a deal, such as exchanging colonies or cards from their hands, while all allies are sent back to their owners' colonies (allies get nothing in this situation). If a deal can't be made, both players lose three ships each as a penalty. If one side plays a Negotiate card against an Attack card, they immediately lose, but they, though not their allies, get "compensation" from the victor by drawing cards from the victor's hand equal to the number of ships they lost in the battle.