"THURN AND TAXIS" vs "TICKET TO RIDE" 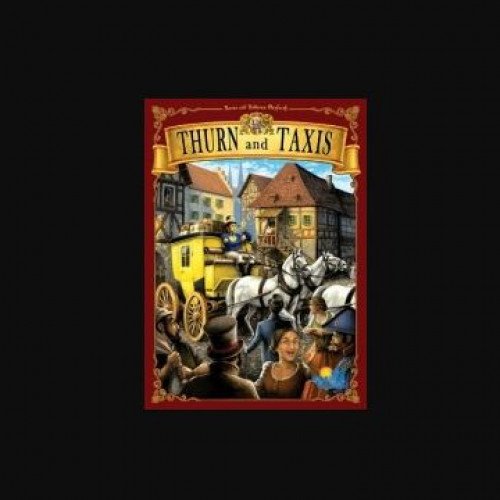 Thurn and Taxis is a board game designed by Karen and Andreas Seyfarth and published in 2006 by Hans im Glück in German (as Thurn und Taxis) and by Rio Grande Games in English. In the game, players seek to build postal networks and post offices in Bavaria and surrounding areas, as did the house of Thurn und Taxis in the 16th century. The game won the prestigious 2006 Spiel des Jahres award. The board is a map of southern Germany and nearby parts of other countries; it is marked into nine provinces, most of which are grouped into five regions. The map shows 22 cities and a network of roads connecting them. Each player has a supply of 20 markers (houses) to place on the cities. Each city may be marked once by each player and the markers remain in place. Each turn the players draw one or more cards representing cities, then play one or more cards, forming or extending a route through successive cities along a sequence of roads. The route may be extended at either end but cannot include the same city twice. After reaching a certain length, a route may be closed and scored. The player then puts markers on some of the cities on the route that he or she has not marked already — either choosing one city in each province traversed by the route, or choosing one province and marking all of its cities that are on the route. Points are awarded for the length of the route, for marking all cities in any of the different regions, for marking a city in every province, and for completing routes at least as long as a succession of target lengths that rise as the game progresses. Play ends after each player has had an equal number of turns and at least one player has either run out of markers or completed the sequence of target lengths; the first player to satisfy either condition also receives a bonus point. In most cases, each successive instance of scoring points for the same thing is worth less; for example, the first player to dominate the region of Baden scores 3 points, the second scores 2, and the third only 1. 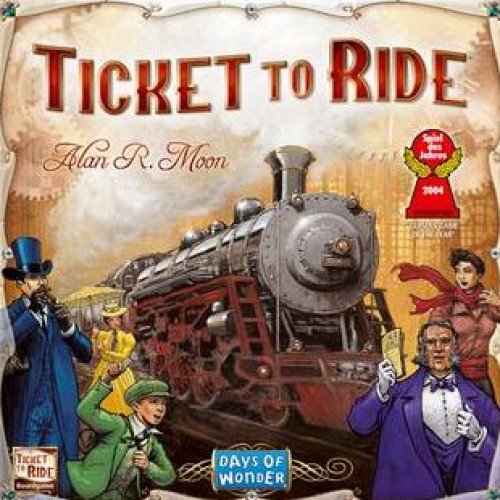 Ticket to Ride is a railway-themed German-style board game designed by Alan R. Moon. It was illustrated by Julien Delval and Cyrille Daujean and published in 2004 by Days of Wonder. The game is also known as Zug um Zug (German), Les Aventuriers du Rail (French), Aventureros al Tren (Spanish), Wsiąść do pociągu (Polish), and Menolippu (Finnish). The original version of the game is played on a board depicting a railway map of the United States and southern Canada. Localized editions have subsequently been published depicting maps of other countries, cities and regions. Players collect and play train car cards to claim train routes across the map. Points are earned based on the length of the claimed routes, whoever completes the longest continuous railway, and whether the player can connect distant cities that are determined by drawing ticket cards. The game won the 2004 Spiel des Jahres, the Origins Award for Best Board Game of 2004, the 2005 Diana Jones award, the 2005 As d'Or Jeu de l'année, and placed second in the Schweizer Spielepreis for Family Games. Ticket to Ride: Europe won the 2005 International Gamers Award. As of August 2008, over 750,000 copies of the game had been sold according to the publisher. As of October 2014, over three million copies were reported sold, with retail sales of over $150 million. At the beginning of the main game, players are dealt four train car cards as their playing hand. They are also dealt three Destination Ticket cards, each of which shows a pair of cities on a map of the United States and southern Canada. These become goals, representing two end-points which players are secretly attempting to connect. The player must keep at least two of these destination cards and discard unwanted tickets, if any, to the bottom of the stack. Once kept, a destination ticket may not be discarded for the rest of the game. Each player also selects a group of 45 colored train pieces with a matching scoring marker. Each turn, the player has to choose from one of three options: draw two railway car cards in various colours from the draw piles (with the restriction that drawing a wild Locomotive card face up forfeits drawing another card), or draw three additional destination ticket cards and keep at least one (replacing undesired tickets at the bottom of the stack), or play their collected railway car cards from their hand to claim a route on the board and place the corresponding number of train pieces from their store on the claimed route, thereby earning points. The routes are of varying lengths (requiring varying numbers of matching coloured cards), and each discrete route marked on the board can be claimed by only a single player. Some cities are connected by two parallel routes that can each be claimed by a different player (unless the game is played by three or fewer players, in which case only one of the routes can be claimed). The same player may not claim both parallel routes between two adjacent cities. Longer routes are worth progressively more points than shorter routes, e.g., a route of length four is worth more than two routes of length two. On their turn, a player can claim any route anywhere on the board that has not already been claimed, regardless of whether the route helps to complete their destination tickets. The routes score points by themselves, as mentioned above, but routes not connected to a player's destination do not help them in reaching the destination or completing their destination ticket. The key to the game is getting the routes connected. Here the blue player has failed to claim the track between Duluth and Omaha, causing the route in the north to be disconnected and thus incomplete. The game ends when one player has only two or fewer of their supply of coloured train pieces. When this occurs, every player then plays one additional turn, after which they each reveal their previously hidden destination tickets. Additional points are awarded for having successfully connected the destinations on the cards, whereas points are subtracted for any incomplete tickets. A ten-point bonus is awarded to the player who has the longest continuously connected set of routes.