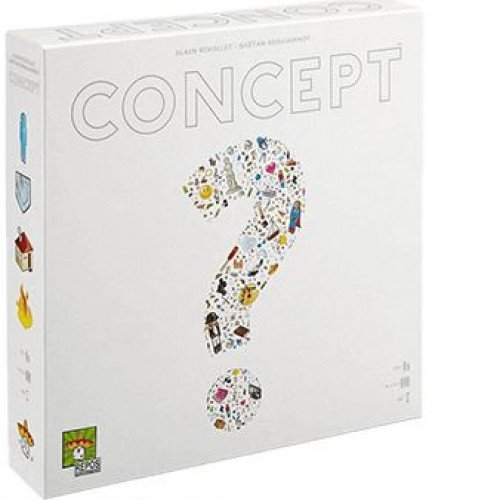 Concept is a deduction party board game released in 2013. The game was designed by Alain Rivollet and Gaëtan Beaujannot and published by Repos Production. It has collected multiple awards and nominations including the Jeu de l'Année prize in Cannes in 2014. Later, in 2018 the kids edition of the game Concept Kids: Animals was released tailored for children aged 4 and up. Concept is a guessing game where players have to guess a concept, such as a word, a name, or a phrase. The players who know the target concept provide hints by marking its attributes and attributes of related concepts on the game board with different-coloured markers, while other players guess. Giving verbal hints is not allowed. The official rules state that the game is played with teams of two players each. On each team's turn, they draw a card and choose a concept from there. Each card has three difficulty levels (blue, red and black) with three concepts each. The team then places a green question mark on the picture illustrating the main category of the concept. They can then further specify the concept with green cubes defining the attributes of the concept and optionally also specify related concepts with red, blue, yellow and black exclamation points and accordingly coloured cubes. The other teams then try to guess the concept. The player who guesses correctly gains one double VP (Victory Point) token while the team who chose the concept gain one single VP token each. The game then proceeds with the next team. Once every double VP token has been used, the game ends. The player with the most VPs wins. The game rules state that using teams is not mandatory, the game can also be played with each player playing against each other. 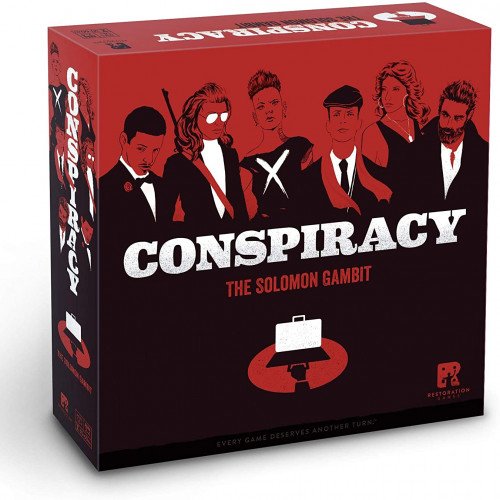 Conspiracy is a 1973 board game made by Milton Bradley. It can be played by 3 or 4 people, and the main goal is to bring a suitcase to their own headquarters through the use of spies. Conspiracy is a family game that was developed by British game-designer Eric Solomon. It is recommended that the game best be played with 4 players. The game takes approximately 90 minutes to play and is for ages 8 and up. Conspiracy requires three skills in order to win: betting/wagering, bluffing, and memory. Within the game there are four capitals, four bankbooks, one top secret briefcase, and eight spies that any player can control. The objective to the game is to move the briefcase to your headquarters. Each player has an account of $10,000 and has the opportunity to either secretly pay off or openly move a spy one space on their turn. Each player can also bribe spies in smaller increments of at least $100. Once a spy is moved, another player can challenge that move. If this is to happen, the two players then reveal how much money each has spent on the spy. If the challenger wins, the move is revoked. If the defender wins, the move stays and the challenger loses his or her next turn. Players must cooperate against whichever player is closest to victory. Each player can make secret plans to openly swipe the case or murder a spy and completely turn the tables on a player who is close to winning. This game has no dice and no cards so no luck is involved. Players must work together or the game will end quickly.