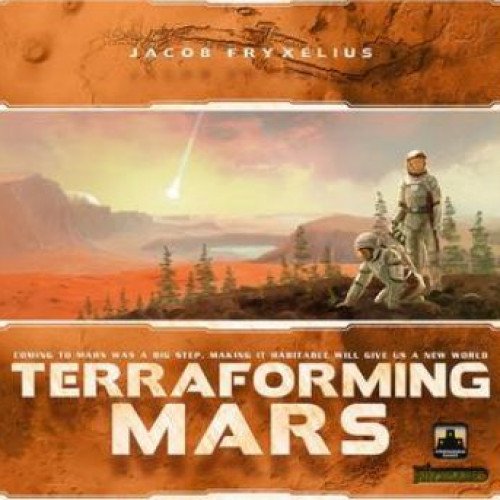 Terraforming Mars is a board game for 1 to 5 players designed by Jacob Fryxelius and published by FryxGames in 2016, and thereafter by 12 others, including Stronghold Games. In Terraforming Mars, players take the role of corporations working together to terraform the planet Mars by raising the temperature, adding oxygen to the atmosphere, covering the planet's surface with water and creating plant and animal life. Players compete to earn the most victory points, which are measured by their contribution to terraforming and to human infrastructure. Players accomplish these goals by collecting income and resources which allow them to play various projects, represented by cards (drawn from a deck of over 200 unique cards), which increase their income or resources or directly contribute to terraforming the planet or building infrastructure. The game has been well received by fans and critics, winning or being nominated for multiple awards and accolades. Players represent competing corporations who all have a stake in terraforming Mars. The game board depicts the planet's surface, which is represented by an array of 61 contiguous hexes. Each hex represents about 1% of Mars' surface area. Onto these hexes, players can place oceans, greenery, cities and other special features. The object of the game is for players to complete three terraforming conditions: raise the atmosphere's oxygen level to 14%; raise the temperature from -30 to +8 degrees Celsius; and cover 9% of Mars' surface by ocean (represented in-game as having 9 ocean tiles placed on Mars). Players accomplish these goals by playing cards that represent various technologies or buildings used to terraform Mars. The game is played over a number of generations, each represented as one game round. A generation begins with players drawing cards, then players take turns performing actions (which can be playing cards, using the ability of a card already in play or paying for one of the several actions depicted on the board). Once all players have finished taking actions, players collect income and resources according to their production of the different resources, then the next generation begins. One of the unique aspects in Terraforming Mars is the Terraforming Rating (TR) system. Whenever a player performs an action that advances one of the terraforming conditions, the player's TR increases. A player's TR not only represents the victory points they have earned during the game, but is also added to a player's money income when collecting income and resources at the end of each generation. The game ends at the end of any generation when the three terraforming conditions have been met. Then, players count up their points, which come from their TR at the end of the game, cities and greeneries that they have placed on Mars, achievements they have claimed during the game and cards they have played, and the player with the highest score wins. 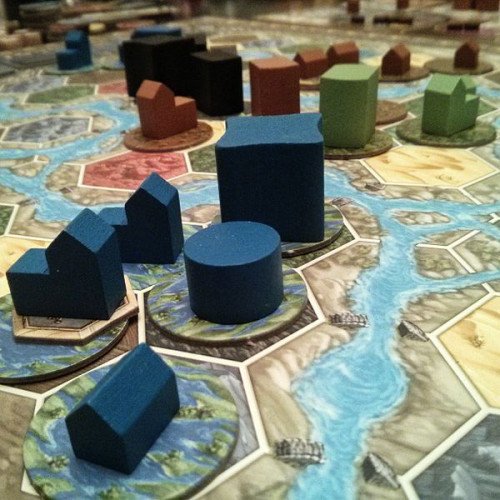 Terra Mystica is a Euro-style board game for two to five players designed by Helge Ostertag and Jens Drögemüller. The game was first published by Feuerland Spiele in Germany in 2012, and was later published in English and French by Zman Games and Filosofia Édition in 2013. Feuerland Spiele released a second German edition of the game in 2013. The game starts with each player picking one of fourteen fantasy factions, each with its own unique special abilities and costs associated with actions. Players expand their territories by constructing buildings on the game board. Each faction is limited to building on only one of seven different terrain types found on the game board; this makes terraforming spaces so they can be built upon a key aspect of the game. The game is split into six rounds during which players take any number of actions to improve their society. Actions may involve settling new spaces, upgrading existing buildings, improving infrastructure like shipping, or increasing the faction's status in an elemental cult. When a player cannot perform any more actions (or they choose not to), they must pass. A round ends upon all players passing. One unique aspect of the game is its power point mechanic. Power points are used to cast spells, and may also be converted for resources. Power points are split among three bowls. When points are gained, they first move from bowl one to bowl two. When bowl one is empty, they can move from bowl two to bowl three. Power points can only be used when they are in bowl three, at which point they return to bowl one. Victory points are accrued throughout the game for a variety of actions. The game lasts for six rounds, after which additional victory points are awarded for end-game goals. The player with the most victory points wins.