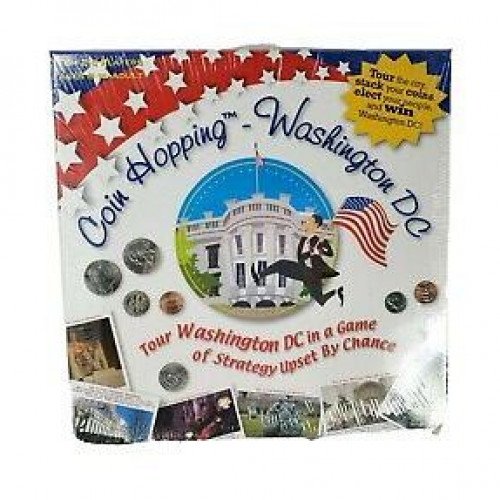 Coin Hopping—Washington D.C. is a board game designed by J. F. Cartier and published in 2007. Each player assumes the role of an interest group and tours Washington, D.C. in an effort to control the three branches of government. The game board is an illustrated map of Washington, D.C. A unique method of travel across the board is controlled by the placement of coins and changes dynamically during the game. This style of game play was originally developed in Cartier's first board game, Island Hopping, which is a similar but simpler game in which players explore the Commonwealth of the Bahamas. Coin Hopping—Washington D.C. is designed for 2-6 players aged 8 years to adult. It has been categorized as a designer board game, a genre made popular by games such as Settlers of Catan, and as an educational game. Coin Hopping—Washington D.C. has won several national awards, including the iParenting Media Award and Dr. Toy’s 100 Best Children’s Products for 2008. There are two objectives in the game. One is to create a stack of four coins. The other is to "control the government" by placing citizens in the Capitol, White House, and Supreme Court. The first person to have simultaneously a stack of four coins and a citizen in each of the three offices is the winner. Players move around the board by "coin hopping". Players can move their pawns to any adjacent space on the board that has a coin on it. A player's turn ends when the player's pawn lands on a space without a coin. Additionally, a player can pick up a coin from one space and carry it with the pawn to another space. This allows the player to move a coin to an empty space or create a stack of coins. The goal is to create a stack of coins which includes one penny, one nickel, one dime and one quarter. Any player who places the fourth coin on a stack gets to claim that stack and remove it from the board. Destination cards allow the player to jump to a specific destination on the board and can be used strategically to move quickly across the board. 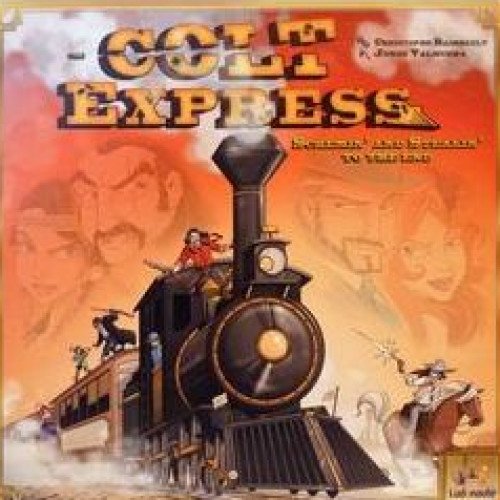 Colt Express is a railway-themed family board game designed by Christophe Raimbault, Illustrated by Ian Parovel and Jordi Valbuena, published in 2014 by Ludonaute and distributed by Asmodee. The game won the 2015 Spiel des Jahres, the 2015 As d'Or - Jeu de l'Année, 4 of the 2014 Golden Geek Award, the 2015 TricTrac Bronze award, the 2015 Lys Grand Public Winner, The 2015 Gouden Ludo, and the 2015 Hungarian Board Game Award. As of November 2016, over 450,000 copies of the game have been sold according to the publisher. In Colt Express, players represent bandits robbing a train at the same time; the goal is to become the richest outlaw of the Old West. Players draw a "round" card which determines the number and order of play as well as whether to play the cards face up (visible) or face down (hidden). In the Schemin' Phase, players play cards to a central card stack following the outline on the round card. In the Stealin' Phase, the central card stack is turned over and the cards are turned over one at a time and the player who played the revealed card executes the action depicted. Actions include "vertical movement" to move from inside the car to the roof or from the roof to inside the car, "horizontal movement" to move to the next car, or move up to 3 cars away if on the roof, "punch" to punch the player in the same car sending them to a neighboring car and causing them to drop one piece of loot, "shoot" to fire your gun at a player in a neighboring car or in your line of sight if on the roof, "steal" to take any loot on the floor, and "move marshal" to cause the marshal to move to a neighboring car and fire his gun at all bandits in the car, causing them to flee to the roof. A game lasts for 5 rounds. A $1000 bonus is given to the first player who shoots all of their bullets, and the player with the most money is the winner.