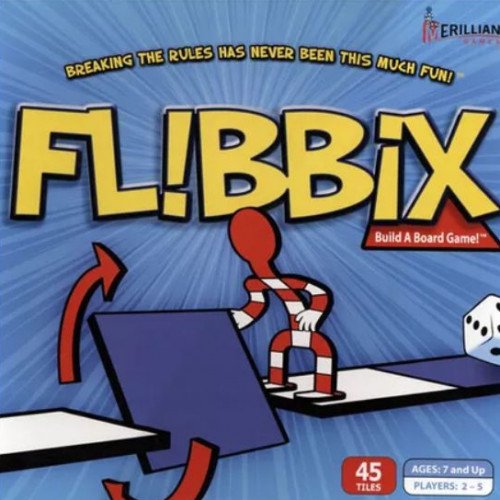 Flibbix is a dynamic board game by Merillian for two to five players, in which players build their own game board using magnetic game board tiles, check off custom rules on a "Make your own Rules" sheet, and then play. Because the game board and rules can be changed before and during each game, players have a large number of board game designs and rule set options that significantly affect how their game will play. The tiles are reusable and the game comes with multiple rule sheets, so it is possible to play the game repeatedly, each time with a different game board and different set of rules. Players can choose to use all, or just some, of the included cards, so game play can be further customized by the players' choice of cards. Flibbix comes with 45 magnetic game board tiles, 40 cards, five game pieces, 50 double-sided rule sheets, one six-sided die, one pencil, quickstart sheet, and a game guide. Flibbix tiles have embedded magnets which allow them to connect in almost any design or order that the players choose. Each tile has sides with positive and negative polarity (the red and green sides of each tile), so that players are given a visual indicator of how tiles should connect to each other. Each tile is double sided and there is frequently a significance between the pairing of each side of a specific tile. For example, an "Extra Turn" tile has "Lose a Turn" on the opposite side. "Move Ahead 5" has "Go Back 5" on the opposite side. A "Right Turn" changes to "Left Turn" on the opposite side. Because game board tiles can be connected in almost any order, players can build game boards that vary the look and play of each game dramatically. A game board can be in the shape of a letter, a straight line, or zig zag. In addition to changing the aesthetic look of a game board, building the game board allows players to significantly alter the way the game plays. For example, if a "Jump to Green Space" tile is placed in the middle of the game, and a "Green Space" tile is placed at the end of the game path, landing on "Jump to Green" would be advantageous to the player who lands on that tile. On the other hand, if the "Green Space" tile were placed at the beginning of the game board, players would try to avoid landing on the "Jump to Green" tile. Likewise, if players choose to populate their board game exclusively with tiles that send players back in the game, or cause players to lose turns, game-play will be different from if they chose to also use tiles which move players ahead, or give players extra turns. 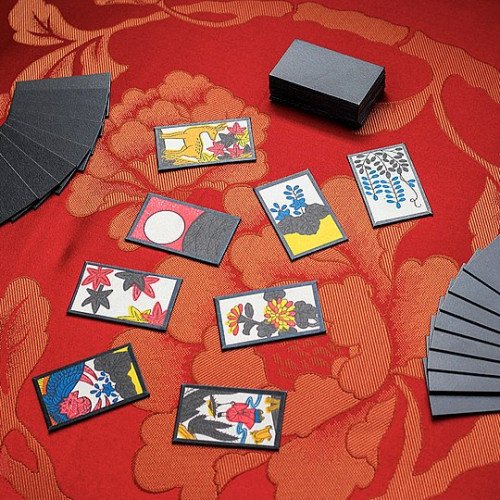 Hanafuda (花札, “flower cards”) are a style of Japanese playing cards, made from paper and cardboard. They are typically smaller than Western playing cards, only 2⅛ by 1¼ inches (5.4 by 3.2 cm). On the face of each card is a depiction of flowers, tanzaku, subjects (animals and other objects), or culturally-significant scenes. The back side is usually plain, without a pattern or design of any kind. Hanafuda are used to play a variety of games like Koi-Koi and Hachi-Hachi. In Korea, hanafuda are known as Hwatu (Korean: 화투, Hanja: 花鬪, “battle of flowers”) and made of plastic with a textured back side. The most popular games are Go-stop (Korean: 고스톱) and Seotda (Korean: 섯다). Hwatu is very commonly played in South Korea during special holidays such as Lunar New Year and Chuseok (추석). In Hawaii, hanafuda is used to play Sakura (also known as Higobana). Hanafuda is also played in Micronesia, where it is known as Hanahuda and is used to play a four-person game, which is often paired cross-table. Playing cards were introduced to Japan by the Portuguese in the mid-16th century. The Portuguese deck consisted of 48 cards, with four suits divided into 12 ranks. The first Japanese-made decks made during the Tenshō period (1573-92) mimicked Portuguese decks and are referred to as Tenshō Karuta. The main game was a trick-taking game intermediate in evolution between Triunfo and Ombre. After Japan closed off all contact with the Western world in 1633, foreign playing cards were banned.