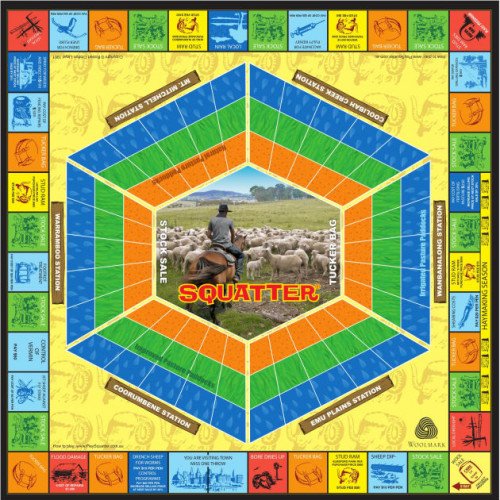 Squatter is a board game that was launched at the Royal Melbourne Show in 1962, invented by Robert (Bob) Crofton Lloyd. With more than 500,000 games sold in Australia by 2007, it became the most successful board game ever developed in Australia. As of 2018 there are still Squatter competitions and active Squatter clubs. In 1999, a version became available on PC CD-ROM. However the PC version was not commercially successful and is no longer available. Superficially, Squatter has the appearance of a Monopoly-type game. However, unlike Monopoly, all players remain in the game until the end. Players each start the game with their own sheep station and aim to be the first player to improve and irrigate their pastures and then fully stock their sheep station. Players run their sheep station as a business venture, to earn enough money to pay for the seasonal running expenses and to finance the improvements that are required to win the game. The Squatter game presents players with a mixture of strategy and luck that reflects the many challenges facing any form of livestock raising. These challenges include droughts, floods and bushfires, as well as disease, variable livestock prices, and luck. The components of the game are stored in a cardboard box with a lid. The box depicts an Australian stockman herding sheep on horseback. The components consist of A square game board with a hexagonal layout representing 6 sheep stations and a Monopoly-like set of squares printed around the edges of the board that pieces move around Two "Ready Reckoner reference" cards Six "Hay Stack" cards, twenty-two "Tucker Bag" cards, five "Stud Ram" cards, twenty-six "Stock Sale" cards, five "Worm Control Programme" cards, five "Fertilized Pasture" cards, five "Control of Weeds and Insects" cards, thirty "Irrigated Pasture" cards and thirty "Improved Pasture" cards Two 6-sided dice Six playing pieces and one hundred and eighty sheep tokens Play money of various denominations 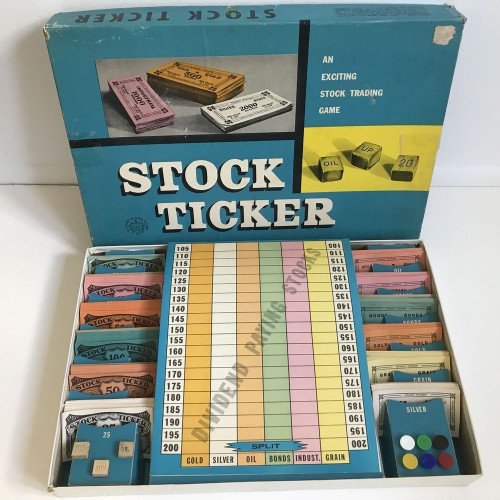 Stock Ticker is a now out-of-print board game that was popular upon its release and is still often played today. It was released by Copp-Clark Publishing, a venerable Canadian publisher. The game has six stocks, which in fact are commodities. These six are gold, silver, Bonds, oil, industrials, and grain. During gameplay all the stocks are identical. Each stock begins costing a dollar apiece. Players are given starting money of $5000 and they buy shares in groups of 500, 1000, 2000, or 5000. The stocks move based on the throw of three dice. The first die picks the stock that will be affected, with one of the commodities on each side of the die. The second die determines what whether the stock will move up, down, or pay a dividend. The third die decides if the movement or dividend will be five, ten, or twenty cents. For instance, a roll of Industrials, Down, 20 will move the industrials stock from its start value of $1.00 to 80 cents. A roll of Grain, Up, 5 would move grain up to $1.05. Dividends are paid out only for any stocks that are at or above $1.00 in value. For instance, a five-cent dividend pays five cents for each share owned. Thus, if a roll is Oil, Dividend, 10, and you own a thousand shares of Oil at $1.25 apiece you will receive a dividend of $100. Note that the dividend is not affected by the value of the share, with only the rule being that stocks worth less than $1.00 do not pay out when a dividend is rolled for them. If a stock ever reaches $2.00 it splits. Everyone who owns the stock doubles the number of shares owned and the stock goes back to being worth $1.00. If a stock falls to being worth nothing all players lose their investment in that stock and must return their shares to the bank. The stock is then reset at $1.00. There are two basic strategies to making money at the game. The first is to buy whichever stocks are safely in dividend-paying territory. Using this method, if a stock splits and returns to the $1.00 value, the owner should sell out and reinvest in a stock that is safely above par. Similarly, if a stock drops below a dollar, the owner should sell the shares. This technique relies upon the rule that any money invested in a stock paying dividends will earn a greater return than shares that are not paying dividends. The second strategy is more risky, but can also be immensely profitable. It involves buying stocks when they are near the bottom of the board and at risk of being worth nothing. Since the dice-rolling system moves stocks by a fixed amount, rather than a percentage of their value, these stocks are very volatile. One thousand dollars will buy ten thousand shares of a ten-cent stock. While this stock could move down by ten or twenty and be wiped out, the most one would lose is a thousand dollars. However, there is an equal chance that the stock will move up, and a single roll of Up 20 will triple the original investment. The possible return on investing in a five-cent stock, the cheapest possible, is even higher.