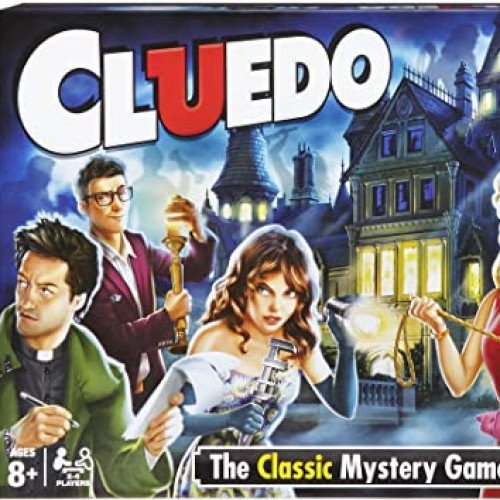 Cluedo (/ˈkluːdoʊ/), known as Clue in North America, is a murder mystery game for three to six players (Depending on editions) that was devised in 1943 by Anthony E. Pratt from Birmingham, England. The game was first manufactured by Waddingtons in the UK in 1949. Since then, it has been relaunched and updated several times, and it is currently owned and published by the American game and toy company Hasbro. The object of the game is to determine who murdered the game's victim, where the crime took place, and which weapon was used. Each player assumes the role of one of the six suspects and attempts to deduce the correct answer by strategically moving around a game board representing the rooms of a mansion and collecting clues about the circumstances of the murder from the other players. Numerous games, books, a film, television series, and a musical have been released as part of the Cluedo franchise. Several spinoffs have been released featuring various extra characters, weapons and rooms, or different game play. The original game is marketed as the "Classic Detective Game", and the various spinoffs are all distinguished by different slogans. In 2008, Cluedo: Discover the Secrets was created (with changes to board, gameplay and characters) as a modern spinoff, but it was criticised in the media and by fans of the original game. Cluedo: The Classic Mystery Game was then introduced in 2012, returning to Pratt's classic formula but also adding several variations. In 1944, Anthony E. Pratt, an English musician, applied for a patent of his invention of a murder/mystery-themed game, originally named Murder!  Shortly thereafter, Pratt and his wife, Elva Pratt (1913–1990), who had helped design the game, presented it to Waddingtons' executive Norman Watson, who immediately purchased it and provided its trademark name of Cluedo (a play on "clue" and Ludo, ludo being Latin for "I play" and a common British term for the game Parcheesi). Although the patent was granted in 1947, postwar shortages postponed the game's official United Kingdom launch until 1949. It was simultaneously licensed to Parker Brothers in the United States for publication, where it was renamed Clue. 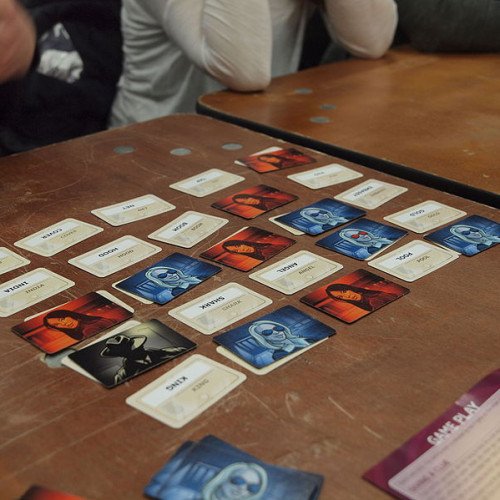 Codenames is a 2015 card game for 4–8 players designed by Vlaada Chvátil and published by Czech Games Edition. Two teams compete by each having a "spymaster" give one-word clues that can point to multiple words on the board. The other players on the team attempt to guess their team's words while avoiding the words of the other team. In a variant with 2–3 players, one spymaster gives clues to the other player or players. In 2016, Codenames won the Spiel des Jahres award for the best board game of the year. Codenames is a game of guessing which codenames (i.e., words) in a set are related to a hint-word given by another player. Players split into two teams: red and blue. One player of each team is selected as the team's spymaster; the others are field operatives. Twenty-five Codename cards, each bearing a word, are laid out in a 5×5 grid, in random order. A number of these words represent red agents, a number represent blue agents, one represents an assassin, and the others represent innocent bystanders. The teams' spymasters are given a randomly-dealt map card showing a 5×5 grid of 25 squares of various colors, each corresponding to one of the code name cards on the table. Teams take turns. On each turn, the appropriate spymaster gives a verbal hint about the words on the respective cards. Each hint may only consist of one single word and a number. The spymaster gives a hint that is related to as many of the words on his/her own agents' cards as possible, but not to any others – lest they accidentally lead their team to choose a card representing an innocent bystander, an opposing agent, or the assassin. The hint's word can be chosen freely, as long as it is not (and does not contain, nor is contained in) any of the words on the code name cards still showing at that time. Code name cards are covered as guesses are made. The hint's number tells the field operatives how many words in the grid are related to the word of the clue. It also determines the maximum number of guesses the field operatives may make on that turn, which is the hint's number plus one. Field operatives must make at least one guess per turn, risking a wrong guess and its consequences. They may also end their turn voluntarily at any point thereafter. After a spymaster gives the hint with its word and number, their field operatives make guesses about which code name cards bear words related to the hint and point them out, one at a time. When a code name card is pointed out, the spymaster covers that card with an appropriate identity card – a blue agent card, a red agent card, an innocent bystander card, or the assassin card – as indicated on the spymasters' map of the grid. If the assassin is pointed out, the game ends immediately, with the team who identified him losing. If an agent of the other team is pointed out, the turn ends immediately, and that other team is also one agent closer to winning. If an innocent bystander is pointed out, the turn simply ends. The game ends when all of one team's agents are identified (winning the game for that team), or when one team has identified the assassin (losing the game).