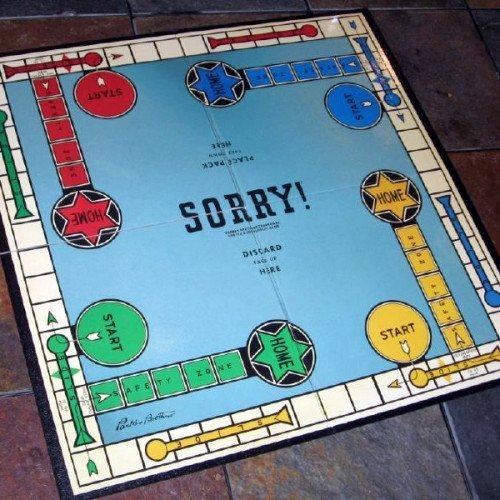 Sorry! is a board game that is based on the ancient Indian cross and circle game Pachisi. Players move their three or four pieces around the board, attempting to get all of their pieces "home" before any other player. Originally manufactured by W.H. Storey & Co in England and now by Hasbro, Sorry! is marketed for two to four players, ages 6 and up. The game title comes from the many ways in which a player can negate the progress of another, while issuing an apologetic "Sorry!" The objective is to be the first player to get all four of their coloured pawns from their start space, around the board to their "home" space. The pawns are normally moved in a clockwise direction but can be moved backward if directed. Movement of pawns is directed by the drawing of a card. The board game is laid out in a square with 16 spaces per side, with each player assigned their own coloured Start location and Home locations offset towards the centre, one per side. Four five-square paths, one per colour, lead from the common outer path towards a player's Home and are designated their "Safety Zone". On each side are two "Slides", grouping four or five spaces each. Older versions of Sorry! contain a coloured "diamond space" directly one space back from each start square; a pawn of the diamond's colour may not move forward over this square. Instead, a pawn of that colour must diverge from the outer space square towards their "Home". The diamond space and corresponding rule were removed from subsequent editions. 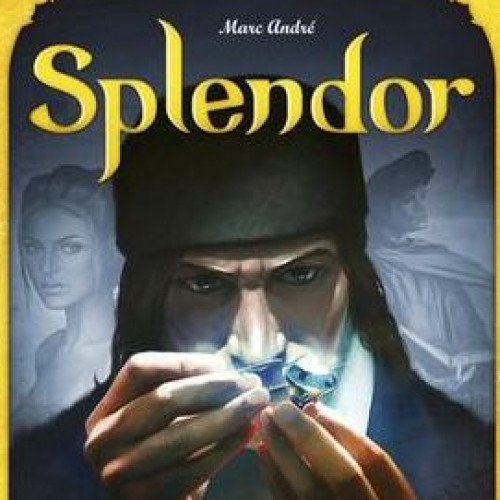 Splendor is a multiplayer card-based board game, designed by Marc André and illustrated by Pascal Quidault. It was published in 2014 by Space Cowboys, Asmodee. Players are gem merchants of the Renaissance, developing gem mines, transportation, and shops to accumulate prestige point. The game was nominated for Game of the Year in 2014 Spiel des Jahres. Mobile application version of the game, both iOS and Android, was published by Asmodee Digital. An expansion, Cities of Splendor, was released in 2017, including four modules (The Cities, The Trading Posts, The Orient, The Strongholds). Splendor is an engine-building and resource management game in which two to four players compete to collect the most prestige points. The game has the following components: 40 gem tokens - seven each of emerald, sapphire, ruby, diamond, onyx, and five gold (wild). These are represented by poker-style chips. 90 development cards 10 noble tiles Each development card falls into one of three levels (•, ••, •••) indicating the difficulty to purchase that card. Every development card also contains a gem bonus (emerald, sapphire, ruby, diamond, or onyx), which may be used for future development card purchases. Before the game begins, n+1 Noble tiles are dealt face up in the center, where n is the number of players. Four cards from each level (•, ••, •••) are dealt face up, visible to the players, and the rest are kept in separate decks of their corresponding difficulty levels.