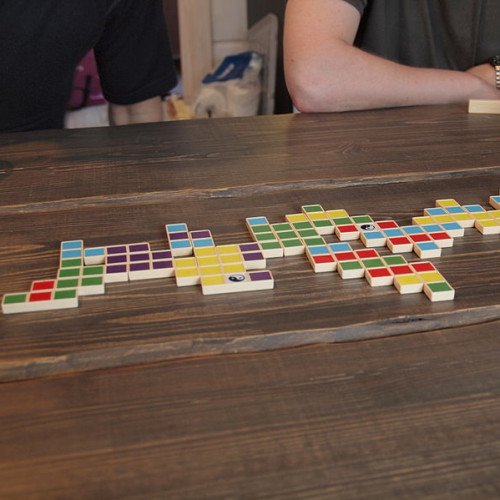 Chromino is a 2001 board game designed by Louis Abraham, for 2 to 7 players. The game is similar to the classic game of dominoes, but uses colours instead of numbers. Five colours are used: red, blue, purple, yellow and green. Each Chromino piece contains three coloured squares, and all 75 distinct combinations of colours are used. There are also five "wild card" pieces, with a yin-yang symbol in the middle, where the middle square may be used as any colour. Each piece has eight square edges. At least two edges must touch a piece already on the board, and squares of different colours may not touch each other. The game begins with a randomly chosen piece placed on the board. On their turn, each player places a piece on the board. If they cannot place a piece, they must take a new one. The first player to run out of pieces wins. 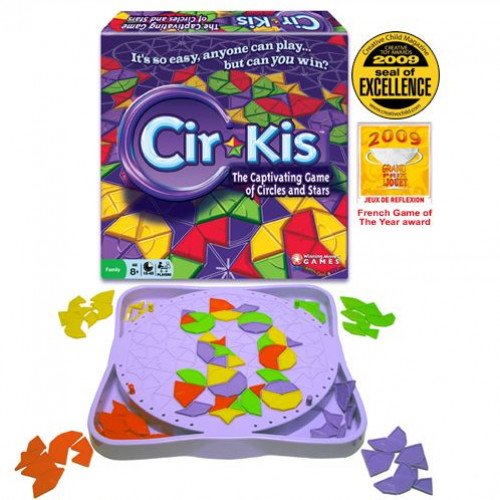 CirKis is a piece placing board game, for two to four players, invented by Phil E. Orbanes and developed by Winning Moves Games USA in 1977. However, the game is no longer in production. It received the French Game of the Year Award for 2009. The game is based on Penrose tiling. The game is played on a decagonal board, which contains the scoring pegs, and has a storage well for each of the four coloured sets of pieces. There are 80 total pieces divided into four identical sets of purple, red, green and yellow. The first player must place a piece inside, or touching, the center circle. Then, every piece played must touch the piece previously placed on the board. So, on a player's turn, they must place a piece so it touches the piece that was just played by the previous player. Players score points by completing circles and stars. If a player has majority of the five segments in the circle or star, they scores 10 points. A five point bonus is awarded to the player who completes the shape if they do not have majority in the shape.