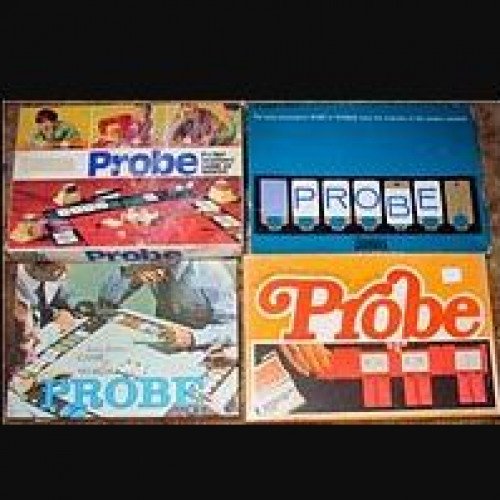 Probe is a parlor game or board game introduced in the 1960s by Parker Brothers. It is reminiscent of the simple two-person game Hangman, whose object is to guess a word chosen by another player by revealing specific letters. Probe extends the number of players to a maximum of four and introduces additional game elements that increase the levels of both skill and chance. Like Hangman, each player has a secret chosen word. But unlike Hangman, the game ends when the last word, not the first word, is revealed. All players remain in the game until the end. It was created by Ted Leavitt and licensed by him to Parker Brothers. The original game set includes four plastic display racks and four decks of 96 cards. Each card has either one letter or a blank on it. Each deck has 5 each of A, S, blank; 3 each of B, H, P, W, Y; 2 each of J, Q, V, X, Z; and 4 each of all the other letters. Each display rack can hold up to twelve cards, with a point value assigned to each card position: 5-10-15-15-10-5-5-10-15-15-10-5. The cards are used to spell out each player's secret word face-down on one of the racks. For words less than 12 letters, blank cards may be used at one or both ends of the word to disguise its true length. Game version #202, introduced in 1976, replaces the letter cards with strips of paper on which the letters are written, and doors snap into place to cover them. In the most basic form of the game, the turn-holding player asks any other player if he has a particular letter of the alphabet hidden on his display rack. If the answer is "no", play simply passes to the next player in sequence. Otherwise, the player turns up any one card showing that letter, and play continues for the turn-holder, who may address another question to the same player or switch to a different player. His turn ends when he finally gets a "no" answer. If any cards were turned up, the point values underneath them are added to turn-holder's score. If any were the last card of a word, a 50-point bonus is added. If the turn ended by asking for a blank (and hearing "no"), a 50-point penalty is assessed. 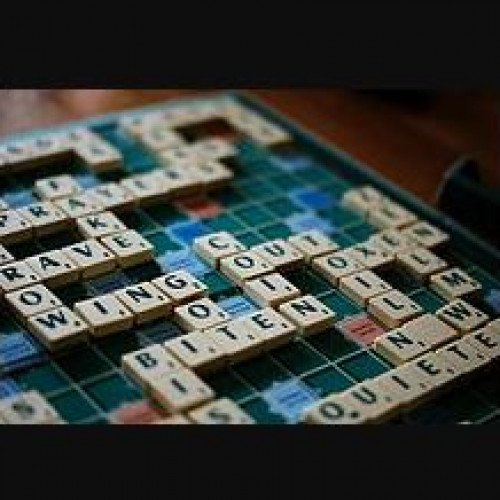 Scrabble is a word game in which two to four players score points by placing tiles, each bearing a single letter, onto a game board divided into a 15×15 grid of squares. The tiles must form words that, in crossword fashion, read left to right in rows or downward in columns, and be included in a standard dictionary or lexicon. The name Scrabble is a trademark of Mattel in most of the world, except in the United States and Canada, where it is a trademark of Hasbro. The game is sold in 121 countries and is available in more than 30 languages; approximately 150 million sets have been sold worldwide, and roughly one-third of American and half of British homes have a Scrabble set. There are approximately 4,000 Scrabble clubs around the world. The game is played by two to four players on a square game board imprinted with a 15×15 grid of cells (individually known as "squares"), each of which accommodates a single letter tile. In official club and tournament games, play is between two players or, occasionally, between two teams, each of which collaborates on a single rack. The board is marked with "premium" squares, which multiply the number of points awarded: eight dark red "triple-word" squares, 17 pale red "double-word" squares, of which one, the center square (H8), is marked with a star or other symbol, 12 dark blue "triple-letter" squares, and 24 pale blue "double-letter" squares. In 2008, Hasbro changed the colors of the premium squares to orange for TW, red for DW, blue for DL, and green for TL, but the original premium square color scheme is still preferred for Scrabble boards used in tournaments. In an English-language set, the game contains 100 tiles, 98 of which are marked with a letter and a point value ranging from 1 to 10. The number of points for each lettered tile is based on the letter's frequency in standard English, commonly used letters such as vowels are worth one point, while less common letters score higher, with Q and Z each worth 10 points. The game also has two blank tiles that are unmarked and carry no point value. The blank tiles can be used as substitutes for any letter; once laid on the board, however, the choice is fixed. Other language sets use different letter set distributions with different point values.