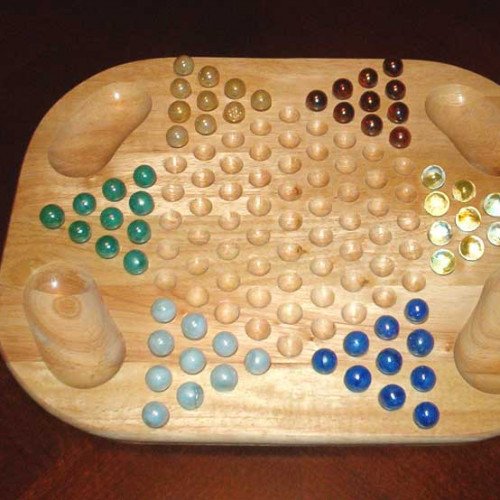 Sternhalma, commonly known as Chinese checkers (US and Canadian spelling) or Chinese chequers (UK spelling). is a strategy board game of German origin which can be played by two, three, four, or six people, playing individually or with partners. The game is a modern and simplified variation of the game Halma. The objective is to be first to race all of one's pieces across the hexagram-shaped board into "home"—the corner of the star opposite one's starting corner—using single-step moves or moves that jump over other pieces. The remaining players continue the game to establish second-, third-, fourth-, fifth-, and last-place finishers. The rules are simple, so even young children can play. The game was invented in Germany in 1892 under the name "Stern-Halma" as a variation of the older American game Halma. The "Stern" (German for star) refers to the board's star shape (in contrast to the square board used in Halma). The name "Chinese checkers" originated in the United States as a marketing scheme by Bill and Jack Pressman in 1928. The Pressman company's game was originally called "Hop Ching Checkers". The game is neither a variation of checkers, nor did it originate in China or any part of Asia. In Japan, the game is known as "Diamond Game" (ダイヤモンドゲーム). The game was introduced to Chinese-speaking regions mostly by the Japanese, where it is known as Tiaoqi (Chinese: 跳棋, "jump chess"). 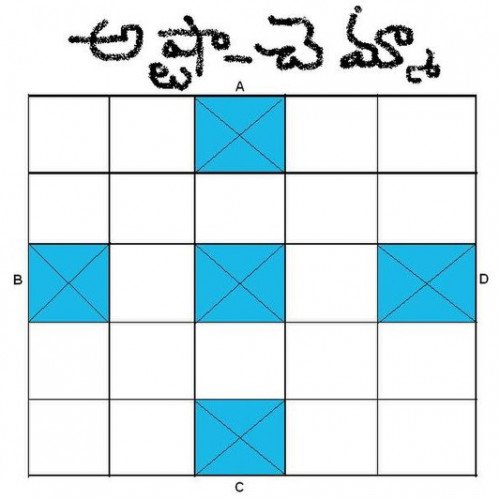 Chowka Bara or Ashta Chamma is a two- or four-player board game from India. This game is an example of a “fully observable” system that has an element of chance introduced by the roll of special dice and an element of strategy (the strategy being the pawn the player decides to move after the roll of the dice). While traditionally played with 4 or 6 cowry shells, dice can also be used. The game of Chowka Bhara is one of the oldest board games extant, still being played in certain parts of India. A person can make a gatii when a person has a single pawn. There are references of this game in some ancient Indian epics like the Mahabharata. Chowka bhara normally has a 5x5 square board and four players, but one can also increase the number of squares depending on the number of players to any odd number squared (for example, 11x11). Assuming the size of the board is NxN (with N being odd), then each player will have N-1 pawns. The 5x5 version is shown in the example diagram. Four players each have four pawns, starting at different positions at the four crossed squares at the outermost ring. The game is controlled by throwing four cowry shells and counting how many are 'as it is' versus those that land 'inverted': if all four shells land inverted it is called "chamma" and if all land as it is then it is called an "ashta". Each player takes a turn to roll the cowrie shells. The mouth of the shell landing upwards has a value of 1 and downwards has a value of 0. However, if every shell shows a value of 0, then the value of the roll is 4 and if all of them shows a value of 1, then the value of the roll is 8. Therefore, the possible values are 1, 2, 3, 4 and 8. Casting 4 or 8 gives the player an additional turn, which can continue until that player rolls a number other than 4 or 8 (namely 1, 2, or 3). Depending on the number rolled, the player can move one (or more) of their pawns that many number of squares on the board. Each player has a fixed path to move pawns, which is in an anti-clockwise direction. The path for Player 1 is given in the example diagram. Each player's piece must completely traverse the outer squares before moving into the inner squares. The tokens enter the board only after a Chamma or Ashta is thrown. Since each cowrie carry 2 points, 2 tokens for Chamma and 4 tokens for Ashta are entered on the board. The tokens travel anti-clockwise in outer squares, clockwise in inner squares and finally lands up in central square (home), with a throw of Ashta or Chamma. If a player's token lands on a square occupied by opponent's token, then the opponent's token is "killed" and the player gets an extra turn to play. The killed token returns to its starting home square and has to go round all over again. In crossed boxes, killing is not possible. When a token reaches the square left of its home square, it further moves up into the inner squares and now moves in clockwise direction. However the tokens enter the inner squares, only when at least one of the opponent's tokens are killed. Otherwise they keep circling around until at least one of the tokens of opponent is killed by them. Every token need not kill an opponent. Each token finishes its race when it manages to get into the home. The first player to get all his tokens into home wins the game. Whenever a Chamma or an Ashta (4 or 8) is obtained during a throw of cowry shells, the player gets a bonus turn to throw the cowries. When a player cuts an opponent's token, he gets an extra turn to play. During an extra turn, either the same token or some other token can be played. If a player throws either a Chamma or an Ashta three times consecutively during his turn, he is out, and cannot use any of the moves. If a player has cut once, all the coins can move into the inner circle, not necessary for every coin to cut opponent. When most of the tokens are dead, it is possible to bring back the dead tokens. For Ashta, 2 tokens and for Chamma 1 token can be brought back.