"SEQUENCE" vs "SHADOWS OVER CAMELOT" 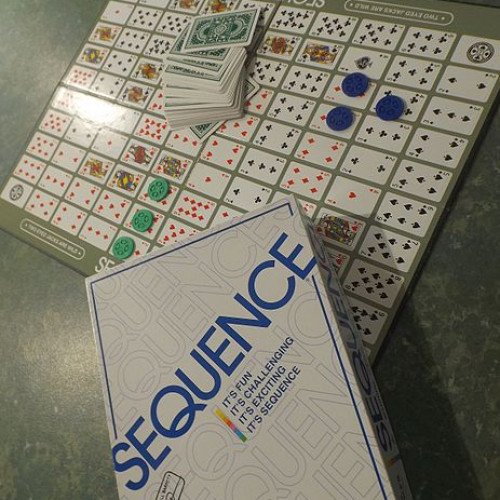 Sequence, an abstract strategy board-and-card game, was invented by Douglas Reuter in Owatonna, Minnesota, over a two-year period in the 1970s. Mr. Reuter originally called the game, "Sequence Five". Reuter spent years developing the concept, and, in June 1981, granted Jax Ltd. an exclusive license to manufacture, distribute and sell the board game, Sequence, and its subsequent variations. The game was first sold in a retail store in 1982. The object of the game is to form rows of five poker chips on the board by placing the chips on the board spaces corresponding to cards played from the player's hand. Playing Board 19 3⁄4 by 15 1⁄4 inches (500 mm × 390 mm); Instructions; 135 poker chips (50 blue, 50 green, 35 red); two full standard card decks (52 cards each, 104 cards total). 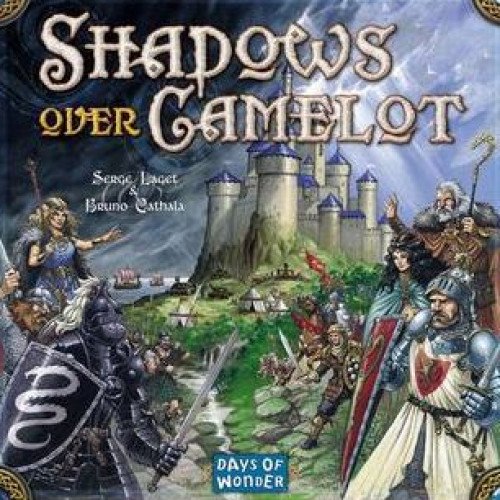 Shadows over Camelot is an Arthurian-themed board game designed by Serge Laget and Bruno Cathala, illustrated by Julien Delval and Cyrille Daujean. The game was unveiled by the publishers Days of Wonder at the 2005 American International Toy Fair and was more widely released in May and June 2005. The game was also published in French as Les Chevaliers de la Table Ronde and in German as Schatten über Camelot. In 2008, an expansion for Shadows over Camelot was released titled Merlin's Company. Players take on the roles of Knights of the Round Table (with the possibility that one player takes the role of traitor) and play the game by fulfilling quests. The game is cooperative in that a shared victory or loss is possible in the absence of a traitor, and a traitor does not benefit by revealing himself too early. The endgame with a revealed traitor is, by contrast, a competitive game of asymmetric teams. This game was featured in an episode of Geek & Sundry's Tabletop on October 3, 2013 and Table Flip on March 29, 2014. 20 page Rules Booklet 16 page Book of Quests 1 Main Camelot/Round Table gameboard 3 additional double-sided Quests (The Holy Grail, Excalibur, and Lancelot/The Dragon) 7 Coat of Arms (one per Knight) 7 standard dice (one for each Knight) and 1 special 8-sided die for the Siege Engines 30 Miniatures (7 Knights, 3 Relics, 12 Siege Engines, 4 Saxons and 4 Picts) 16 black/white Swords of the Round Table 168 cards (84 white, 76 black and 8 Loyal/Traitor) The Knights of the Round Table in the game are King Arthur, Sir Galahad, Sir Gawain, Sir Kay, Sir Percival, Sir Palamedes, Sir Tristan of Lyonesse. An alternate character, Sir Bedivere, was distributed in games trade magazines and at conventions as a promotional item, and is also available as part of Merlin's Company.