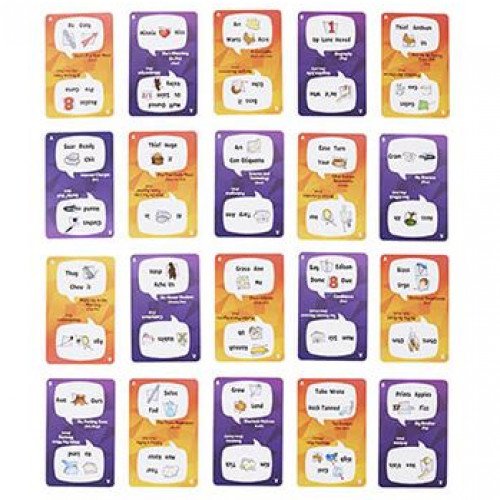 Mad Gab is a game created by Terry White in which there are at least two teams and 2–12 players. Each team has two minutes to sound out three puzzles. The puzzles, also known as mondegreens, contain small words that, when put together, make a word or phrase. For example, "These If Hill Wore" when pronounced quickly sounds like "The Civil War". Another example would be "Eye Mull of Mush Sheen" quickly spoken it sounds like "I'm A Love Machine". There are two levels of difficulties: easy and hard. The faster the puzzles are answered, the more points the players score. This game uses phonetics, which is a branch of linguistics. This game is a test for the human brain to process sounds based on simpler English-written sounds into a meaningful word or phrase. The game is designed where a person would not be able to decode the meaning of the phrase unless spoken out loud and listened; reading the phrase silently will not allow the player to decode the meaning because sounds would have to be encoded into meaningful English words. Original Mad Gab Game includes 300 cards and 1200 different puzzles. It also includes a timer unit, flipper unit, score pad and instructions. A Bible Mad Gab version released in 2000 references the New International Version of the Bible, including 300 puzzles and 1200 statements from the Bible. For example, "Know Ozark" when pronounced quickly sounds like "Noah's Ark". 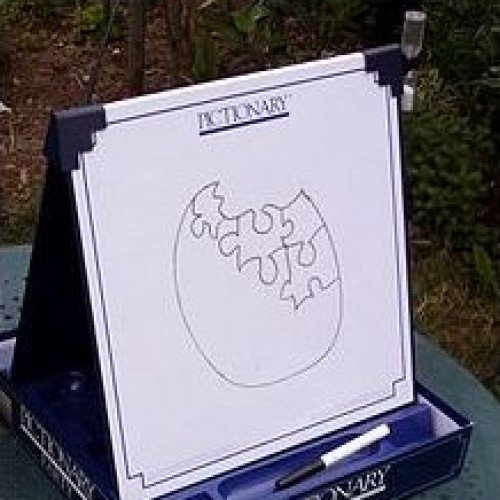 Pictionary (/ˈpɪkʃənəri/, US: /-ɛri/) is a charades-inspired word-guessing game invented by Robert Angel with graphic design by Gary Everson and first published in 1985 by Angel Games Inc. Angel Games licensed Pictionary to Western Publishing. Hasbro purchased the rights in 1994 after acquiring the games business of Western Publishing. Mattel acquired ownership of Pictionary in 2001. The game is played in teams with players trying to identify specific words from their teammates. The concept of Pictionary was first created by Robert Angel and his friends in 1981. Angel and his roommates came up with the concept of the game, which proved to be very popular between them. While originally hesitant to pitch the idea, Angel was inspired by Trivial Pursuit, the gameplay of which was similar to his concept and proved to him that such gameplay could work and be successful. Angel and his business partners Terry Langston and Gary Everson first published Pictionary in 1985 through Angel Games. A week before Pictionary was first launched, Angel Games' printing company called to inform them that they could not sort through the 500,000 cards they had printed out. Angel and his partners had to sort through the cards themselves over the course of six days. They managed to sell 6,000 copies in one year at $35 each. Angel Games licensed the game in 1986 in a joint venture between The Games Gang and Western Publishing. In 1994, Hasbro took over publishing after acquiring the games business of Western Publishing. In 2001, Pictionary was sold to Mattel. At that time they were in 60 countries and 45 languages, with 11 versions just in the US and a total of 32,000,000 games sold worldwide.