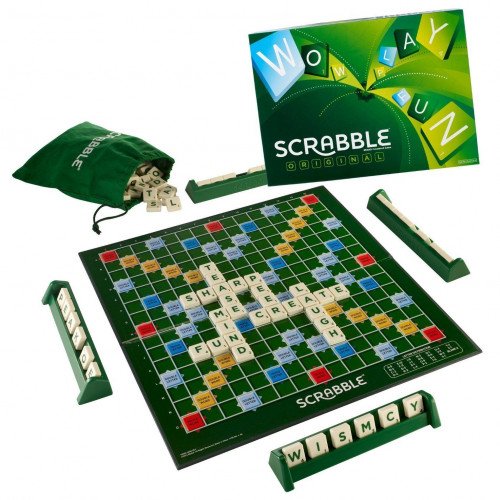 Scrabble is a word game in which two to four players score points by placing tiles, each bearing a single letter, onto a game board divided into a 15×15 grid of squares. The tiles must form words that, in crossword fashion, read left to right in rows or downward in columns, and be included in a standard dictionary or lexicon. The name Scrabble is a trademark of Mattel in most of the world, except in the United States and Canada, where it is a trademark of Hasbro. The game is sold in 121 countries and is available in more than 30 languages; approximately 150 million sets have been sold worldwide, and roughly one-third of American and half of British homes have a Scrabble set. There are approximately 4,000 Scrabble clubs around the world. The game is played by two to four players on a square game board imprinted with a 15×15 grid of cells (individually known as "squares"), each of which accommodates a single letter tile. In official club and tournament games, play is between two players or, occasionally, between two teams, each of which collaborates on a single rack. The board is marked with "premium" squares, which multiply the number of points awarded: eight dark red "triple-word" squares, 17 pale red "double-word" squares, of which one, the center square (H8), is marked with a star or other symbol, 12 dark blue "triple-letter" squares, and 24 pale blue "double-letter" squares. In 2008, Hasbro changed the colors of the premium squares to orange for TW, red for DW, blue for DL, and green for TL, but the original premium square color scheme is still preferred for Scrabble boards used in tournaments. Blank Scrabble tile Scrabble tile for "C" Scrabble tile for "R" Scrabble tile for "A" Scrabble tile for "B" Scrabble tile for "B" Scrabble tile for "L" Scrabble tile for "E" The name of the game spelled out in game tiles from the English-language version. Each tile is marked with their point value, with a blank tile—the game's equivalent of a wild card—played as the word's first letter. The blank tile is worth zero points. In an English-language set, the game contains 100 tiles, 98 of which are marked with a letter and a point value ranging from 1 to 10. The number of points for each lettered tile is based on the letter's frequency in standard English, commonly used letters such as vowels are worth one point, while less common letters score higher, with Q and Z each worth 10 points. The game also has two blank tiles that are unmarked and carry no point value. The blank tiles can be used as substitutes for any letter; once laid on the board, however, the choice is fixed. Other language sets use different letter set distributions with different point values. Tiles are usually made of wood or plastic and are 19 by 19 millimetres (0.75 in × 0.75 in) square and 4 mm (0.16 in) thick, making them slightly smaller than the squares on the board. Only the rosewood tiles of the deluxe edition vary in width up to 2 mm (0.08 in) for different letters. Travelling versions of the game often have smaller tiles (e.g. 13 mm × 13 mm (0.51 in × 0.51 in)), sometimes they are magnetic to keep them in place. The capital letter is printed in black at the centre of the tile face and the letter's point value printed in a smaller font at the bottom right corner. Most modern replacement tile sets come at 18 mm × 20 mm (0.7 in × 0.8 in). The official Scrabble board design. Key: 2×LS – Double letter score 3×LS – Triple letter score 2×WS / ★ – Double word score 3×WS – Triple word score S is one of the most versatile tiles in English-language Scrabble because it can be appended to many words to pluralize them (or in the case of most verbs, convert them to the third person singular present tense, as in the word PLUMMETS), Alfred Butts included only four S tiles to avoid making the game "too easy". Q is considered the most troublesome letter, as almost all words with it also contain U, a similar problem occurs in other languages like French, Dutch, Italian, and German. J is also difficult to play due to its low frequency and a scarcity of words having it at the end. C and V may be troublesome in the endgame, since no two-letter words with them exist, save for CH in the Collins Scrabble Words lexicon. 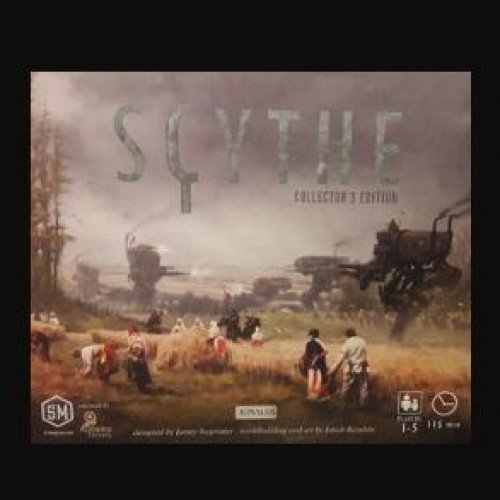 Scythe is a board game for 1 to 5 players designed by Jamey Stegmaier and published by Stonemaier Games in 2016. Set in an alternate history 1920s Europe, in Scythe players control factions which produce resources, build economic infrastructure, and use giant dieselpunk war machines called mechs to fight and control territory. Players take up to two actions per turn using unique player boards, with the game proceeding until one player has achieved six achievements, at which point the players receive coins for their achievements and territories controlled, with the player with the most coins winning. The game was originally released via Kickstarter, raising over $1.8 million. Scythe received very positive reviews, with particularly strong praise for the game's artwork, which was produced by Polish painter Jakub Różalski under the name World of 1920+. As of 2020, Scythe is ranked 11th among all board games on BoardGameGeek. The 1920+ universe is also featured in the video game Iron Harvest released in September 2020. In Scythe, players represent different factions in an alternate history 1920s Europe recovering from a great war, where each faction is seeking its fortune. Players build an economic engine by choosing one of four main actions each turn, listed on the top of their personal player board, which cannot be the same as the main action they selected in their previous turn. They can also take a corresponding second action listed on their player board. These actions allow them to move units on the board, trade for or produce goods, bolster their military, deploy mechs, enlist recruits for continuous bonuses, build structures, and upgrade their actions to make them stronger or cheaper. Each player has six stars that they will place on the board upon completion of certain goals, such as deploying all four of their mechs. When one player has deployed all their stars, the game immediately ends, with each star and territory controlled granting a certain amount of money depending on how much popularity the player has achieved during the game. The player who has the most money is the winner.