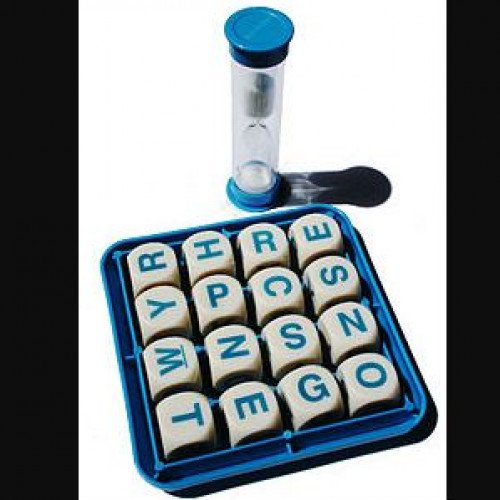 Boggle is a word game invented by Allan Turoff and originally distributed by Parker Brothers. The game is played using a plastic grid of lettered dice, in which players attempt to find words in sequences of adjacent letters. The game begins by shaking a covered tray of 16 cubic dice, each with a different letter printed on each of its sides. The dice settle into a 4×4 tray so that only the top letter of each cube is visible. After they have settled into the grid, a three-minute sand timer is started and all players simultaneously begin the main phase of play. Each player searches for words that can be constructed from the letters of sequentially adjacent cubes, where "adjacent" cubes are those horizontally, vertically, and diagonally neighboring. Words must be at least three letters long, may include singular and plural (or other derived forms) separately, but may not use the same letter cube more than once per word. Each player records all the words they find by writing on a private sheet of paper. After three minutes have elapsed, all players must immediately stop writing and the game enters the scoring phase. In the scoring phase, each player reads off their list of discovered words. If two or more players wrote the same word, it is removed from all players' lists. Any player may challenge the validity of a word, in which case a previously nominated dictionary is used to verify or refute it. For all words remaining after duplicates have been eliminated, points are awarded based on the length of the word. The winner is the player whose point total is highest, with any ties typically broken by count of long words. 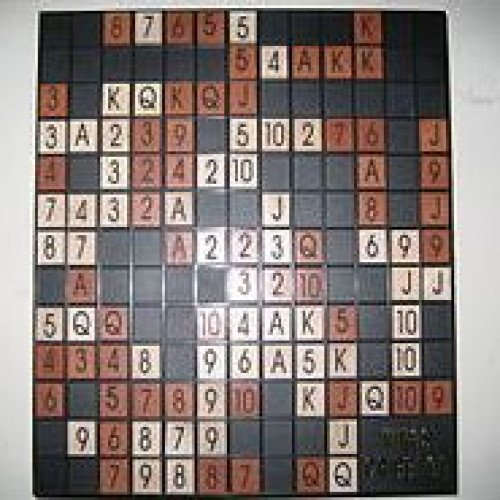 Kings Cribbage is a board game released by Cococo Games that counts like cribbage, but plays like a crossword puzzle. It uses a raised-grid gameboard and features playing card tiles, 4 tile holders and a bag. Game play for Kings Cribbage is much like Scrabble. Players first draw a letter from a bag to see who draws (and goes) first. Unlike Scrabble, however, players only draw 5 tiles rather than 7. The first player chooses a Cribbage hand within his 5 tiles and then places it in a line (in any order) anywhere on the board. The first play must be between 2 and 5 tiles, but all subsequent plays can be anywhere from 1 to 5 tiles. Points are tallied based on the rules of Cribbage. He then restocks his tiles and the play continues to the next person. The next player must then choose a hand (using his tiles and the tiles already on the board) and place it next to the tiles on the board. The game continues until one player has used up all his/her tiles. Players who are caught at the end with tiles must subtract their point values from their hand (subtracted points do not go to the player who went out first). All tiles placed on the board must contribute toward a Cribbage hand (i.e. 6789Q is invalid because the Queen does not add any points to the hand). Hands on the board may not be any more than 5 tiles long but may be as short as 2 tiles. The number 6 can also be used as a 9. Once placed on the board with a designated value of 6 or 9 it can no longer be changed.