"BANANAGRAMS" vs "THE BIG TABOO" 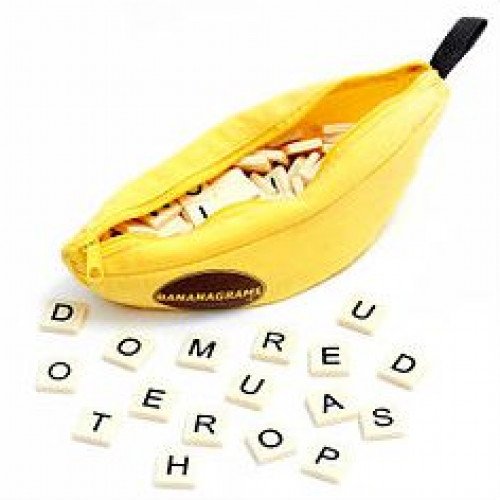 Bananagrams is a word game invented by Abraham Nathanson and Rena Nathanson of Cranston, Rhode Island, wherein lettered tiles are used to spell words. Nathanson conceived and developed the idea for the game with the help of his family. The name is derived from the founding family's claim that it's the "anagram game that will drive you bananas!" Beginning as a family innovation, Bananagrams was made available to the public in January 2006 at the London Toy Fair. The game is similar to the older Scrabble variant Take Two. Gameplay involves arranging one's tiles into a grid of connected words faster than one's opponents. The object of the game is to be the first to complete a word grid after the pool of tiles has been exhausted. The tiles come in a fabric banana-shaped package. The game consists of 144 lettered tiles that are placed face down on the playing surface. This is called the 'Bunch'. The same number of tiles is drawn by each player (between 11 and 21 depending on the number of players – 1 to 8 people can play), and once a player calls out "Split!", all the players turn over their tiles to reveal the lettered sides. Each player races to create their own word grids by arranging the letters to form words connected in intersecting or interlocking manner (words should not be separate from one another). You may rearrange your grid as many times as you like – the name "Bananagrams" is a play on the word anagrams, as one must often rearrange the words one has already formed in order to allow newly drawn tiles to be placed into one's grid. When a player uses up all of their tiles, they call out "Peel!" and each player must draw a new tile from the pool of remaining tiles ("the Bunch"). If at any time during play a player gets stuck with a tricky letter, the player can announce "Dump!" and exchange any letter for three tiles from the "Bunch". When there are fewer tiles in the "Bunch" than there are players, the first person to use up all their letters shouts "Bananas" and wins, becoming Top Banana if all of their words are valid. 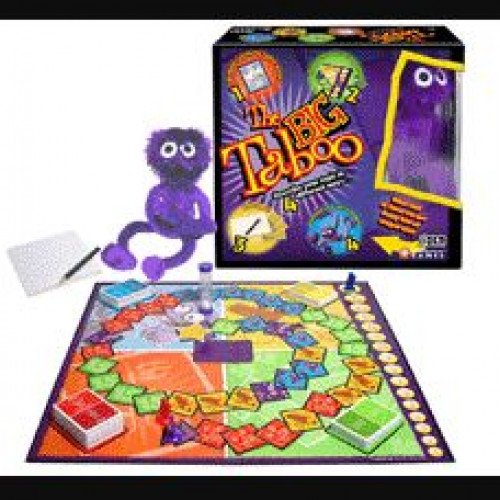 The Big Taboo is a variation on the board game Taboo. It incorporates elements from games like Pictionary, Charades, and 25 Words or Less to create a party game with "a little bit of everything". The game was published in 2008 by Winning Moves Games USA and is no longer in production. To start the game, players divide into two teams. Through describing and correctly guessing keywords, teams advance their respective pawns around a spiraling track. Each round, one person on each team gives clues to his or her teammates, who try to guess as many correct words as they can in the time allotted. The method and rules of clue-giving change each round, depending on the space the pawn landed on. On some spaces, clues are given using the rules of the classic Taboo game. On other spaces, clues must be drawn, limited to 15 words, or acted out using "Bendy Bob", a purple plush character included with the game. Once the round's timer runs out, the team advances its pawn a number of spaces equal to the number of words they guessed correctly that turn. The turn then passes to the other team. Play continues until one team reaches the last space on the track.