"SCOTLAND YARD" vs "SCOUNDRELS OF SKULLPORT" 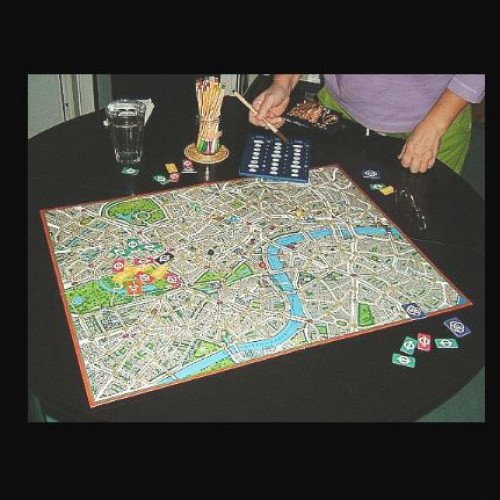 Scotland Yard is a board game in which a team of players controlling different detectives cooperate to track down a player controlling a criminal as they move around a board representing the streets of London. It was first published in 1983. It is named after Scotland Yard - the headquarters of London's Metropolitan Police Service in real-life. Scotland Yard is an asymmetric board game, during which the detective players cooperatively solve a variant of the pursuit-evasion problem. The game is published by Ravensburger in most of Europe and Canada and by Milton Bradley in the United States. It received the Spiel des Jahres (Game of the Year) award in 1983 - the same year that it was published. One player controls 'Mr. X': a criminal whose location is only revealed periodically throughout gameplay. The other players each control a detective, all of which are always present on the board. All players start with a number of tokens ("tickets") which each allow them to use one of the following methods of transport: Taxis, which allow the player to move only one space per use but can be used on most spaces in the game to move in all directions. Buses, which are available throughout most of the board and allow longer-distance travel but only if the player is located at a bus station. The Underground, which allows quick, long-distance travel between stations that are long distances from each other and can therefore be used to move towards Mr. X if he turns out to be a long distance away. Ferries, which only Mr. X can use with a black tile, allow him to follow routes along the River Thames between Greenwich and Whitehall. All players draw one of 29 possible cards, each with a starting location on the back, which the player must move their token to. Mr. X always draws first and doesn't share where he is starting with the detectives. The locations on the cards are spaced far enough apart to ensure that Mr. X cannot be caught in the first round of play. There are a total of 199 spaces ("stations") on the board. Each detective begins with a total of 23 transport tickets: 11 taxi tickets, 8 bus tickets and 4 Underground tickets. Once each transport token is used by a detective, it is turned over to Mr. X, effectively giving him an unlimited amount of transport tokens. For each move that Mr. X makes, he writes down his destination. The game comes with a "travel log" and paper inserts to be used with it, on which Mr. X can write this. After making a note of his location, Mr. X covers it with the ticket that he has used to move there, giving the detectives a clue as to his whereabouts. Mr. X also has a supply of black tokens (one per detective in play or always five in the Milton Bradley version) that can be used in place of any other kind of transport ticket but prevents the type of transport from being visible, and three tokens that allow him to make two moves in a single round. The water routes require a black ticket to use and so when one of these is played the detectives must consider whether or not it is being used to hide a river trip. Mr. X moves first each turn, after which the detectives must move, but they can do so in any order. At five specific times during the game, Mr. X has to reveal his current position. Detectives will take this opportunity to refine their search and, if possible, plan ways to encircle him. After Mr. X has revealed himself, the types of transport that he uses on the next few turns limit the number of possible spaces that Mr. X could be on, providing useful information to the detectives (as well as preventing some types of cheating from the person playing Mr. X). The game is won by the detectives if any of them land on Mr. X's current location or if they block all of Mr. X's possible moves. Mr. X wins by avoiding capture until all detectives can no longer move, due to them either exhausting their token supplies or finding themselves at a station which they can't move from as they have no more usable tokens. Although the game is designed for 3-6 players, many play this game with only 2. The detectives, when controlled by 1 person, are far more coordinated. When 3-5 people are playing as the detectives, they must work as a team which can be much more difficult, although they can share ideas and plans, allowing them to combine their brainpower. The game contains: 1 game board (a map of Central London) 6 colored playing pieces 130 transportation tickets 1 label sheet 29 start cards 3 'double-move' tickets 1 travel log and paper inserts 1 storage tray to be used to store tickets, start cards and playing pieces There are two mainboard editions, one typically associated with Milton Bradley, and another typically associated with Ravensburger. The primary difference between these is in the numbering of the stations: five stations are numbered differently, with 108 missing from the Milton Bradley boards and 200 missing from the Ravensburger boards. There are also minor differences in the routes, such as a bus line between stations 198 and 199 that is changed to a taxi line in later editions, and the removal of a taxi line between stations 13 and 14 sometime after the renumbering. 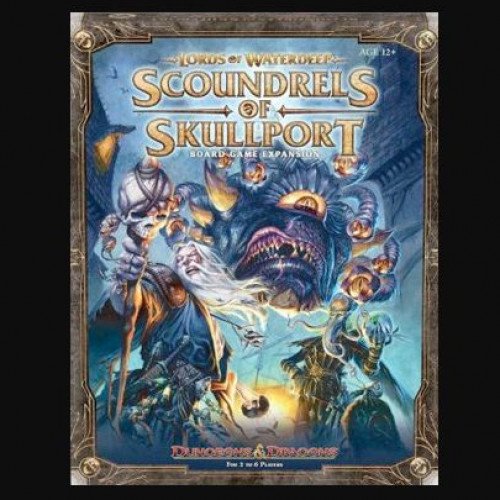 In August 2013 Wizards of the Coast released an expansion to the game titled Scoundrels of Skullport. It consists of two expansion modules – Undermountain and Skullport – that can be used to expand the base game separately or in tandem. The expansion has won the Dice Tower Award for Best Board Game Expansion of 2013. Scoundrels of Skullport includes: 3 new game boards (Skullport, Undermountain and the corruption track), 6 agent meeples for a new gray-colored faction called the Gray Hands 1 more agent meeple for each of the colors from the base game (Black, Red, Blue, Green, Yellow) 25 corruption tokens 6 new Lords of Waterdeep cards 50 new Intrigue cards 60 new quest cards 24 new building tiles 16 adventure caravan tokens (4 for each of the four adventurer types, representing 5 adventurer cubes each) Undermountain adds a new mechanic to the game in the form of placing resources on the game board spaces. This can be things like adventurers or even gold. Undermountain buildings are generally more rewarding than normal buildings. For example, one of the new buildings "The Citadel of the Bloody Hand" gives the player 4 fighters when players use it (the owner gets 2 fighters) and then the player must place 1 fighter on 2 different spaces on the board. When a player puts an agent on a space where such resources have been placed, that player gets what the space would normally give them for placing there plus any resources that are on that space. Undermountain quests also tend to be very expensive, but also very rewarding, granting up to 40 victory points at once. Skullport adds another new mechanic to the game called corruption. There is a game board for corruption called the corruption track. There are 25 corruption tokens in the game – one token at the -1 value with three tokens on the rest up to -9. At the end of the game each corruption players have is worth a number of points equal to the highest numbered empty corruption space. So if there is 1 corruption on -5 and no corruption on -4, all corruption tokens in players taverns are worth -4 points at the end of the game. Skullport buildings, like with Undermountain, can also yield greater resources than the base game building, but they tend to also give the player corruption tokens. However, some Skullport buildings and cards will allow a player to return corruption to the track or remove corruption from the game entirely.