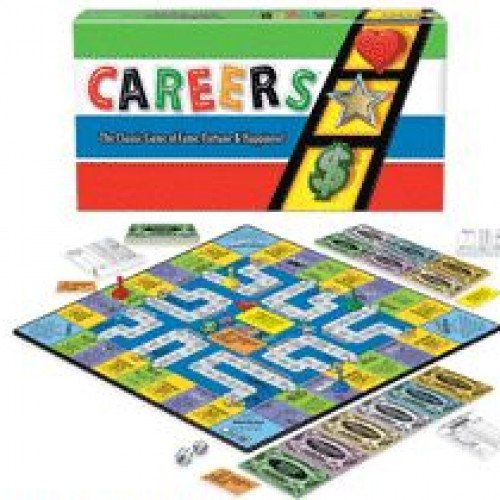 Careers is a board game first manufactured by Parker Brothers in 1955 for $2.97 US, and was most recently produced by Winning Moves Games. It was devised by the sociologist James Cooke Brown. Victory conditions (a secret "Success Formula") consist of a minimum amount of fame, happiness and money that the player must gain. Players (from two to six) set their own victory conditions before the game begins, the total of which must be sixty (or one hundred, recommended when only two are playing). The square-shaped board consists of an outer track and several minor loops (called occupation paths), each of which starts and ends at a space on the outer track. Originally there were eight loops, but that was later simplified to six. Some fame, happiness and money ("victory points") can be obtained on the outer track. These victory points can be obtained more quickly on the occupation paths. Each occupation path has more opportunities for certain types of victory points than others (e.g., in Hollywood there are many opportunities to get fame points). Each occupation also has certain minimum entry requirements. In the oldest versions of the game, players landing on a square occupied by another player are "knocked to the park bench" in one corner of the board, where they must throw a 2, 4, 5, 6, 7, 8, 10, 11, or 12 to move on. Another corner has a square for a "Bermuda holiday" where players throwing below 7 can stay and accumulate happiness points. Another corner has a square for hospital fees, which must be paid to the bank or to another player who has obtained a medical degree by going to the 'university' occupation path. Occupation paths offer opportunities to collect extra points and to increase the annual salary, which is collected when passing the start square, or doubled if a player lands on it. However, there are a number of squares in the occupation paths with negative consequences, such as being sent to the park bench, having a salary cut or paying hospital fees. Completion of an occupation path enables a player to pick up an 'experience' card, which they can use instead of rolling the dice. These enable the player to move on one, two or three squares. If a player completes a single occupation path several times, they can pick up multiple experience cards. Other 'opportunity' cards are collected when landing on particular squares on the outer track which gives a player the option to move to an occupation path. Some of these cards are special or golden opportunities and enable the player to begin the occupation path without the usual prerequisites (usually a payment, a particular degree or having completed another occupation path). An unusual feature of this game compared to more modern board games is that individual players need to record much information on their own scoresheet, such as annual salary, degrees earned and number of times occupation paths have been completed. 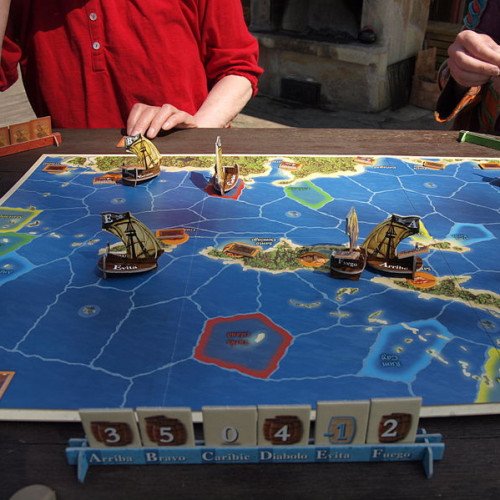 Caribbean is a 2004 board game designed by Michail Antonow and Jens-Peter Schliemann. The game was nominated for the 2005 Vuoden Peli Adult Game of the Year. Caribbean is a game for two to four players, taking place in the Caribbean in the 18th century. Six pirate ships, named Arriba, Bravo, Caribic, Diabolo, Evita and Fuego, sail the waters, intent on plundering treasure from ports both on the continent and on several islands. The players are looking to make as much profit as possible from this plundering. However, the players do not have direct control over the ships - their pirate crews work independently, and so the players have to bribe them with barrels of rum to get to issue them orders. To this end, each player has seven cards, each containing a different number of barrels. Six of these are numbered from 0 to 5, and the seventh is a special "robber" card, numbered -1. At the start of a round, each player assigns six of their cards, in secret, to the six pirate ships, deciding on how much rum they want to bribe each ship's crew with. After this, the players go through the ships one by one, revealing their bribes for the ship in question. The player with the highest bribe gets to move the ship, as many places as there are barrels on their bribe card. In case of a tie, the players may opt to reveal their seventh card as a tie-breaker. This tie-breaker may only be used once per round. If another player has assigned the "robber" card to the ship in question, one barrel of rum is stolen from the player with the highest bribe. Players gain money by plundering treasure from ports and taking it to their secret hide-outs, indicated on the board by a coloured border around the place, with the colour corresponding to the player's own chosen colour. The first player to reach a pre-set sum of money wins.