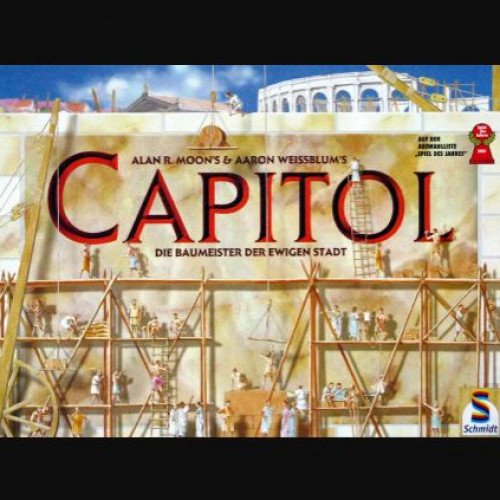 Capitol is a German-style building game set in the ancient Roman Empire, designed by Aaron Weissblum and Alan R. Moon. The game was published by Schmidt Spiele in 2001. It was redeveloped into a quicker-playing card game named Clocktowers and published by Jolly Roger Games. Capitol is played in 4 rounds and each round is divided into 4 phases: Construction, Improvement, Scoring, and End phase. During the Construction phase the players are able to perform actions with their hand of building, roof, and permit cards. Building cards allow you to take 2 floors (small wooden blocks). You can add these to an incomplete building or create a totally new building. Roof cards allow you to complete a building by placing a round or triangular roof on your stack of floor blocks. Once your building is complete, you can place it onto the board with a Permit card. The permit card comes in three different flavors, pink, blue and purple each correlating to three sections of the board. Once all the players have passed on playing cards, you then proceed to the Improvement phase. This is a very fast bidding phase in which players can win fountains, amphitheaters, or temples. Then comes the Scoring phase, each of the 9 areas are scored by determining the first and second Players. The first Player in each area receives 2 points. If the area has a fountain, the first and second players receive an additional point. If the area has a temple, all of the points received are doubled. The final phase is the End phase. Each player draws 6 cards, one at a time, from the face up stacks of building, roof, and permit cards. If an area has an amphitheater, the first player may draw 2 extra cards and the second player may draw one extra. The player with the most points at the end of 4 rounds wins the game. 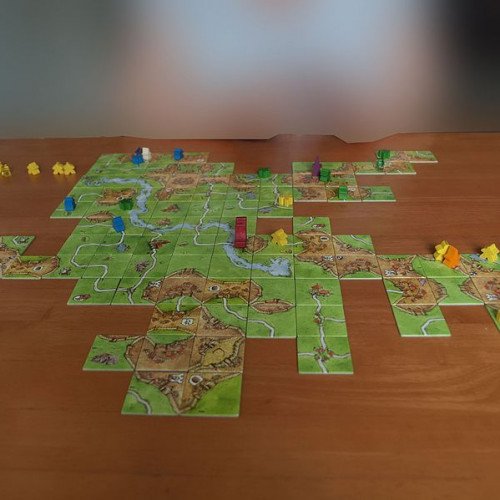 Carcassonne (/ˌkɑːrkəˈsɒn/) is a tile-based German-style board game for two to five players, designed by Klaus-Jürgen Wrede and published in 2000 by Hans im Glück in German and by Rio Grande Games (until 2012) and Z-Man Games (currently) in English. It received the Spiel des Jahres and the Deutscher Spiele Preis awards in 2001. It is named after the medieval fortified town of Carcassonne in southern France, famed for its city walls. The game has spawned many expansions and spin-offs, and several PC, console and mobile versions. A new edition, with updated artwork on the tiles and the box, was released in 2014. The game board is a medieval landscape built by the players as the game progresses. The game starts with a single terrain tile face up and 71 others shuffled face down for the players to draw from. On each turn a player draws a new terrain tile and places it adjacent to tiles that are already face up. The new tile must be placed in a way that extends features on the tiles it touches: roads must connect to roads, fields to fields, and cities to cities. After placing each new tile, the placing player may opt to station a piece (called a "follower" or "meeple") on a feature of that newly placed tile. The placing player may not use a follower to claim any features of the tile that extend or connect features already claimed by another player. However, it is possible for terrain features claimed by opposing players to become "shared" by the subsequent placement of tiles connecting them. For example, two separate field tiles (each with a follower) can become connected into a single field by another terrain tile. The game ends when the last tile has been placed. At that time, all features (including fields) score points for the players with the most followers on them. The player with the most points wins the game.