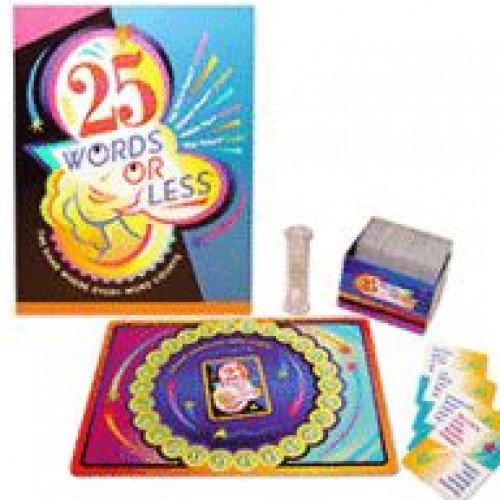 25 Words or Less is a party board game in which two teams of players take turns bidding words back and forth, until one team allows the other to try to give that number of clues to their team to try getting five words from a card in only one minute. It was first published by Winning Moves Games USA in 1996 and was republished in 2006 as 25 Words or Less: People, Place and Things Edition. The game is no longer in production. The game is played by one player from each of the two teams drawing a card (one between the two of them) and looking at the five words on the card. They then begin bidding words, starting at 25 and working backward, until one player passes. The player who passed then flips the timer, and the other player has one minute to give clues to their team, to try to get them to guess each of the five words on the card, where each word in the giver's clues counts as one of the words bid. If the Giver manages to get their team to guess all five words, their team keeps the card. If they run out of time, the card passes to the other team. Two new players from each team then start the next turn of bidding after looking at a new card. The game ends once one team has collected ten cards. A game show version of this aired in summer 2018 in syndication hosted by Meredith Vieira. It premiered as a regular series on September 16, 2019. 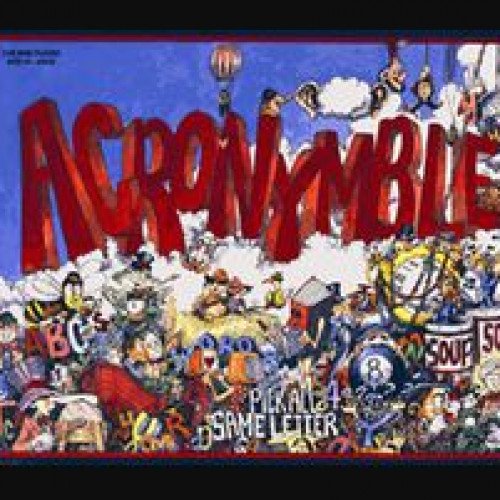 Acronymble is a board game published in 1991. It challenges players to create funny acronyms (known as noodles) from a random sequence of letters. For example, if players received the letters E.U.M.G., one might write, "Elvis Unglued My Grandfather", and another, "Eek!!! Ugly Man-eating Gerbils!" Players then vote for their favorite acronym using a blind voting process, and are not allowed to vote for their own noodles. The game gives players three to seven letters each round to write their "Noodles". Letters are given in one of three ways: Purely random (e.g. E.U.M.G.) All the Same Letter (e.g. S.S.S.S.S.) A starting letter and a length are given (e.g. “G” and a “6”). Players are then challenged to come up with a 6 letter word that starts with “G” (e.g. “GIGGLE”) and use those letters to write their Noodle. (e.g. Granny Is Glowing, Growing Little Eggplants.”) Acronymble is mostly subjective, in that there are no right and wrong answers, although players are awarded points if their Noodle contains a complete sentence. Acronymble was developed by Acronymwits Inc. in 1991, and designed by Steven May. An Acronymble game show spoof was later produced using the premise. It aired on public access television in Massachusetts and won the Massachusetts Cable Commission award for "Best Entertainment and Variety Show" in 1997. There are online versions of Acronymble played under a number of different names, Acrophobia being the most popular (Acronymble predates all of these). The only differences between Acronymble and these online versions is that they offer players only random letters to work with, and they often ask competitors to write their acronyms on a specific subject.