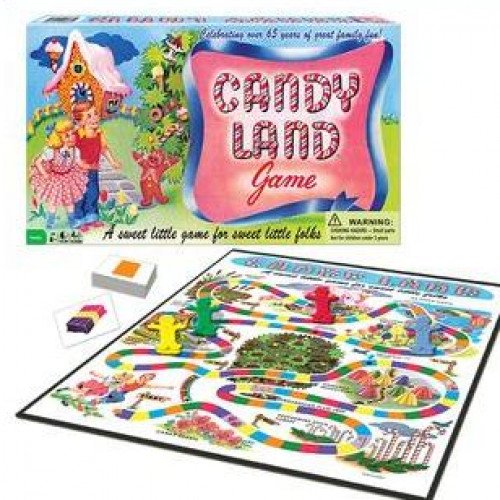 Candy Land (also Candyland) is a simple racing board game currently published by Hasbro. The game requires no reading and minimal counting skills, making it suitable for young children. Due to the design of the game, there is no strategy involved: players are never required to make choices, just follow directions. The winner is predetermined by the shuffle of the cards. A perennial favorite, the game sells about one million copies per year. The race is woven around a storyline about finding King Kandy, the lost king of Candy Land. The board consists of a winding, linear track made of 134 spaces, most red, green, blue, yellow, orange or purple. The remaining pink spaces are named locations such as Candy Cane Forest and Gumdrop Mountain, or characters such as Queen Frostine and Gramma Nutt. Players take turns removing the top card from a stack, most of which show one of six colors, and then moving their marker ahead to the next space of that color. Some cards have two marks of a color, in which case the player moves the marker ahead to the second-next space of that color. The deck has one card for each named location, and drawing such a card moves a player directly to that board location. This move can be either forward or backward in the classic game; backward moves can be ignored for younger players in the 2004 version of the game. Prior to the 2006 edition, the board had three colored spaces marked with a dot. Two of these spaces were designated as "cherry pitfalls" and the other was situated in Molasses Swamp. A player who lands on such a space is stuck (all cards are ignored until a card is drawn of the same color as the square). In the 2006 version, dot spaces were replaced with licorice spaces that prompt the player landing on it to simply lose the next turn. The game is won by landing on or passing the final square and thus reaching the goal of the Candy Castle. The official rules specify that any card that would cause the player to advance past the last square wins the game, but many play so that one must land exactly on the last square to win. The 2004 version changed the last space from a violet square to a rainbow space, meaning it applies to any color drawn by a player, thus resolving any dispute about exactly who wins the game. As of 2013, Candy Land is being sold by Hasbro with a spinner instead of cards. The spinner includes all outcomes that were previously on the cards. 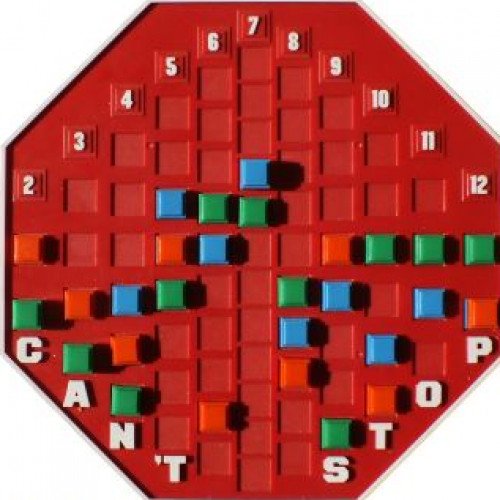 Can't Stop is a board game designed by Sid Sackson originally published by Parker Brothers in 1980; however, that edition has been long out of print in the United States. It was reprinted by Face 2 Face Games in 2007. An iOS version was developed by Playdek and released in 2012. The goal of the game is to "claim" (get to the top of) three of the columns before any of the other players can. But the more that the player risks rolling the dice during a turn, the greater the risk of losing the advances made during that turn. On each turn, the player rolls the four dice, then divides them into two pairs, adding up each pair. (For example, a player rolling a 1, 2, 3, and 6 could group them as 5 and 7, 4 and 8, or 3 and 9.) If the neutral markers are off the board, they are brought onto the board on the columns corresponding to these totals. If the neutral markers are already on the board in one or both of these columns, they are advanced one space upward. If the neutral markers are on the board, but only in columns that cannot be made with any pair of the current four dice, the turn is over and the player gains nothing. This is generally called 'going bust.' After moving the markers, the player chooses whether or not to roll again. If the player stops, they put markers of their color in the location of the current neutral markers. If the player restarts this column on a later turn, they start building from the place where they previously placed their markers. If the player does not stop, they must be able to advance one of the neutral markers on their next roll, or lose any advancement made this turn. When a player reaches the top space of a column and claims it then this column is won, and no further play in that column is allowed. A player claims three columns to win the game. The official rules merely say "If you can place a marker, you must...", not stating if that applies before or after a player decides how to subdivide the four dice. This rule is potentially confusing for the following reason: Suppose the player has a neutral marker in the 7-column, with two un-played. The player now rolls 2-2-5-5. Of course, the player wants to declare two sevens. The player still has an unplayed neutral marker, so is the rule interpreted such that the player must place their remaining two neutral markers, playing on 4 and 10? The rule may have only been intended to apply to requiring that all die-pairs be played, if possible. For instance, if the player rolls 3-4-1-2, they may choose to make a 7 and a 3, advancing their 7 marker, and they must also place their 3 marker even though they would prefer to hold it in reserve.