"BUCCANEER" vs "CAMEL UP" 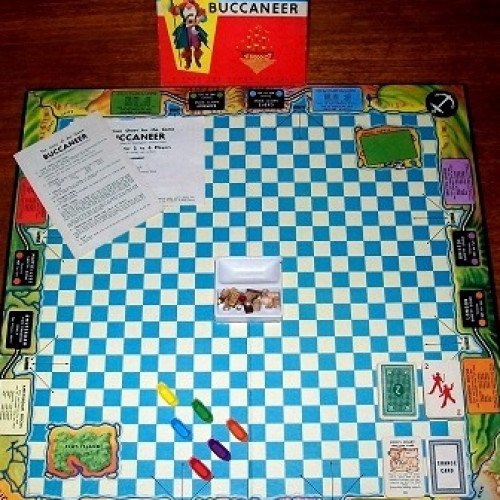 Buccaneer was a board game published in Britain by Waddingtons between the 1930s and 1980s. The game board depicts the sea, broken into squares. Around the edges are ports, some owned by players, others being "free ports". At the centre is Treasure Island, upon which is placed semi-realistic looking treasures: diamonds, rubies, pearls, gold bars, and rum barrels. The 1938 version of the game had a roll up canvas board (packaged in a tube) and a playing area of 25 x 25 squares, the Treasure Island in the middle spanning 5 x 5 squares. Complete sets of this version are now very rare and in good condition can sell for more than £100 (UK pounds - as of 2010). This version had 9 rum barrels and 6 of each of the other treasure items. The game has been revised over the years. A major revision in 1958 saw the playing area change to a folding board with a square cut out for a plastic tray insert as Treasure Island. The island shrank to 4 x 4 squares and the playing area to 24 x 24 squares. However, the 1958 continued to be a 6 player game. At least three versions of the game appeared in this format, the 'small box' version with all the pieces and cards in a small box and a separate board which was made quite thick and heavy, then there came the 'large box' version where the box now contained the folded board. Both versions used the same basic graphics until these were replaced by the 'blue box' version with excited Pirates finding a treasure chest displayed on the cover. A box insert now came with 'Treasure island' graphics, palm trees etc. The players each have a ship which they can sail to Treasure Island and pick up a "Chance Card." These cards contain instructions, either bad ("You are blown to Cliff Creek") or good ("Take treasure up to 5 in total value"). The treasure is placed inside the plastic ship, which can contain up to two treasures, and the player can sail back to home port to unload the treasure, or trade treasure and crew at the other ports. Players can attack other players' ships during the game and capture their treasure or crew. The number of spaces a player can move and outcomes of battles are decided on the crew cards held in the hand of each player. In all versions since "1958 version" (and perhaps earlier) the winner was the first to collect 20 points worth of treasure. 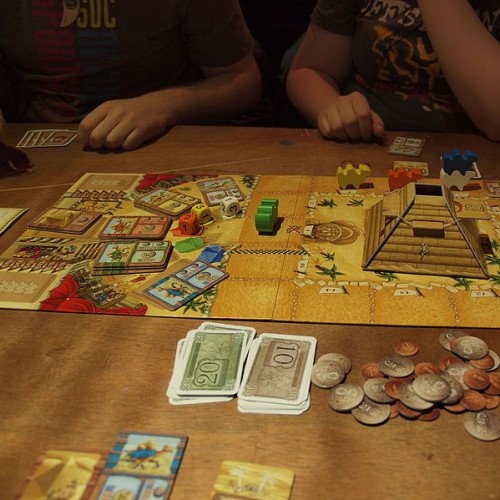 Camel Up is a board game for two to eight players. It was designed by Steffen Bogen and illustrated by Dennis Lohausen, and published in 2014 by Pegasus Spiele. Players place bets on a camel race in the desert; the player who wins the most money is the winner of the game. Camel Up won the Spiel des Jahres in 2014. In 2015, an expansion called Camel Cup: Supercup was released, allowing the game to be played with up to 10 players. A mobile app was also released in 2015 for Android and iOS devices At Essen 2018, a German board game convention, Eggertspiele released a second edition of the game with new artwork by Dennis Lohausen and Chris Quilliams, and revised game rules.