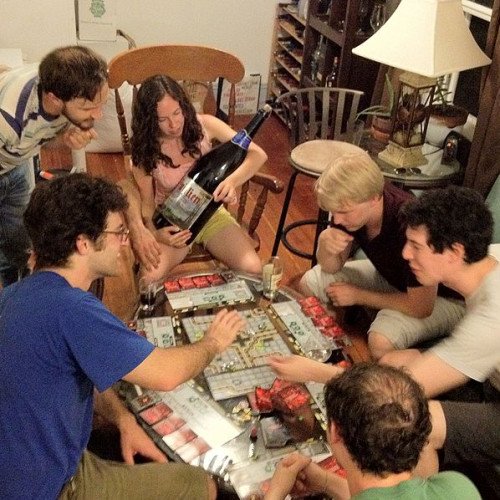 RoboRally is a board game originally published in 1994 by Wizards of the Coast (WotC). It was designed in 1985 by Richard Garfield, who would later create the card game Magic: The Gathering. RoboRally was rereleased in July 2005 under the Avalon Hill label, and again in 2016 by Wizards of the Coast. In RoboRally, players assume control of one of many "Robot Control Computers" in a dangerous widget factory filled with moving, course-altering conveyor belts, metal-melting laser beams, bottomless pits, crushers, and a variety of other obstacles; the concept is that this is what the control computers do for fun after hours. The goal in a game of RoboRally is, apart from survival, to be the first to reach a pre-designated number of checkpoints in a particular order. However, the real difficulty in RoboRally is movement, which is accomplished with the randomly dealt program cards. The program cards specify movement, such as move one space forward, turn left or U-turn. The cards have to be arranged by the player in the specific manner they wish the robot to move. Each player receives up to nine cards each turn. They use five of the cards to specify their robot's movement for the given turn, playing each card face down into one of five available "registers". All robots move simultaneously, each player revealing each register in turn. Robots attempting to move into the same space at the same time are resolved by priority numbers printed on the cards. A robot moving into an occupied space "pushes" the blocking robot (even more of them) into the next space. Players with damaged robots receive fewer cards: with one point of damage, the player receives eight cards, with two points, seven cards, and so on. When a player's robot takes five or more points of damage, its registers become "locked", keeping specific program cards in play until the robot is repaired. Each player has a very limited amount of time to place their cards, which combined with the unpredictability of the plans of the other players, often leads to one's robots moving in unexpected ways. Robots can also carry optional weapons and devices, which add to the carnage and mayhem. These devices can cause additional damage, allow robots to move differently, affect the movement of other robots, and disrupt opponents' plans in other ways. The game embodies an inversion of the concept of computer simulation games: rather than a computer simulating some real world action, human players simulate the actions of computers. The basic game includes six different boards, which allow players variety of play as well as the ability to alter the length or difficulty of games. The original metal pieces in RoboRally were designed by Phil Foglio, who also did the artwork for the game. The Crash and Burn, Grand Prix, and Radioactive expansions were designed by Glenn Elliott. 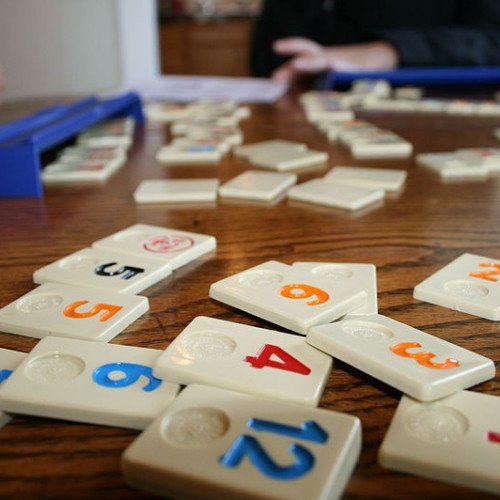 Rummikub is a tile-based game for 2 to 4 players, combining elements of the card game rummy and mahjong. There are 106 tiles in the game, including 104 numbered tiles (valued 1 to 13 in four different colors, two copies of each) and two jokers. Players have 14 or 16 tiles initially and take turns putting down tiles from their racks into sets (groups or runs) of at least three, drawing a tile if they cannot play. In the Sabra version (the most common and popular), the first player to use all their tiles scores a positive score based on the total of the other players' hands, while the losers get negative scores. An important feature of the game is that players can work with the tiles that have already been played. Rummikub was invented by Ephraim Hertzano, a Romanian-born Jew, who immigrated to Palestine in the 1940s. He hand-made the first sets with his family in the backyard of his home. Hertzano sold these sets door-to-door and on a consignment basis at small shops. Over the years, the family licensed it to other countries and it became Israel's best selling export game. In 1977, it became a bestselling game in the United States. The game was marketed as "Rummikid" during part of the 1970s. Hertzano's Official Rummikub Book, published in 1978, describes three different versions of the game: American, Sabra, and International. Modern Rummikub sets include only the Sabra version rules, with no mention of the others, and there are variations in the rules between publishers. The game was first made by Lemada Light Industries Ltd, founded by Hertzano in 1978. Rummikub is similar to several central European card games which are played with two decks of playing cards, including Machiavelli and Vatikan. Vatikan is played with two decks of cards and one joker per player, thus making 106 cards for two players. Rummikub's main component is a pool of tiles, consisting of 104 number tiles and two joker tiles. The number tiles range in value from one to thirteen in four colors (blue, red, orange, and black). Each combination of color and number is represented twice. Players each have a rack to store tiles without revealing the face of the tiles to the other players.