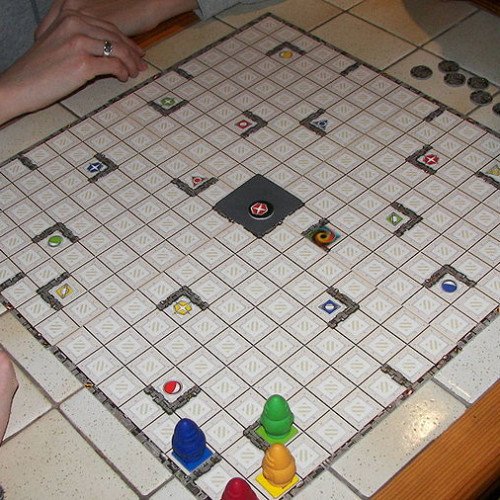 Ricochet Robots is a puzzle board game for 2 or more people, designed by Alex Randolph, in which the playing pieces (robots) must be moved to selected locations in as few moves as possible, working within strict limitations on robots' movements. The game was first published in Germany in 1999 as Rasende Roboter. An English version was published by Rio Grande Games. The board consists of four double-sided quarters, each with a hole in a corner; these corners meet in the middle of the board, where a plastic piece with four stubs holds them in place. Board quarters can be permuted and flipped over to give 96 different board arrangements. There are also 17 chips, 16 with a symbol on a colored background and one multicolored corresponding exactly to a field on the board. At the beginning of play, four colored robots (also matching the colored fields) are placed randomly on the board and one of the chips is turned over. The object of the game is to bring the robot of the correct colour to the field indicated on the overturned chip using as few moves as possible. Any of the robots can be moved horizontally or vertically, and they do not stop until they reach an obstacle — either a wall or another robot. As soon as one of the players has found a solution, they state the total number of moves for all of the robots used and start a timer. Then every player has the chance to state the number of moves for their solution until the time runs out. After that, the player who stated the lowest number of moves shows their solution. If they correctly demonstrate a solution in the stated number of moves or less, they earn the chip. If not, the player with the next higher number may try, and so on; then a new chip is turned over and a new round begins. After all 17 chips have been used up, the player with the most chips wins the game. 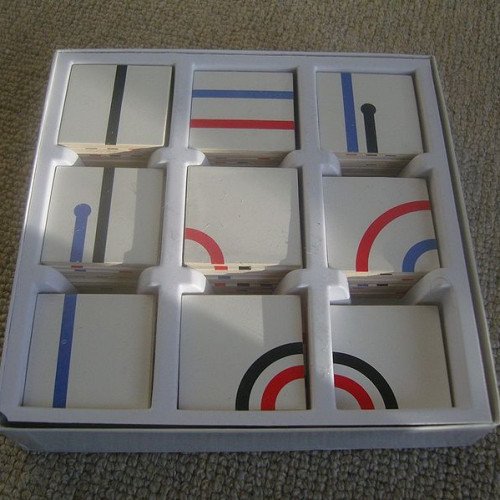 Rivers, Roads & Rails is a matching game similar to dominoes, but with 140 square tiles and in some respects similar to Bendomino. The game consists of square card pieces featuring different coloured tracks. The game was created by Ken Garland and Associates and first published in 1969 under the name Connect. Since 1982 it has been produced by Ravensburger, first in an abstract form, and since 1984 under the current theme with artwork by Josef Loeflath. It has also been known under the name Contact. A large area like a tabletop or the floor is used. The tiles are turned face down and all players randomly draw ten tiles and place them face up in front of them. The youngest player is the first player to start. The starting player randomly chooses a face-down tile, and turns it face up in the center of the play area. Beginning with the starting player, each player on their turn draws a face-down tile (while there are ones remaining). Each tile has at least one of the river, road or rail on it. The player chooses one of his or her tiles and places it so that it matches up with river, road and/or rail on the tiles that have already been played. If that player cannot play a tile, then they must pass. Play then proceeds to the next player (rules don't specify which direction) until all of the tiles of one player have been played, or no one can play a tile.