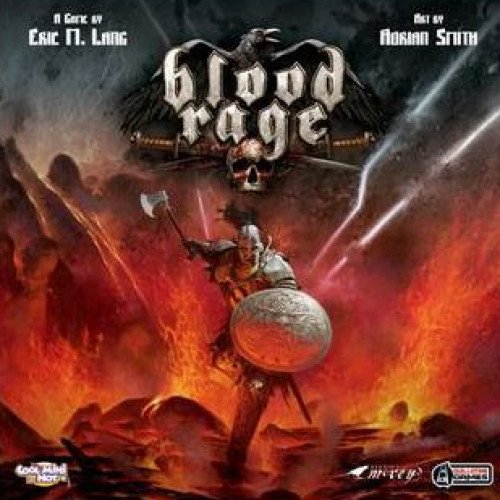 Blood Rage is a Viking themed board game designed by Eric Lang and published by CMON Limited in 2015. Each player controls a clan of mythological Vikings seeking glory as Ragnarok approaches. Played in three ages or rounds, Blood Rage features card drafting, battles and territory control via forces represented by sculpted plastic miniatures. All conflicts are resolved through playing cards, and cards are also used to improve and differentiate the different clans and the leaders, warriors, ships and monsters at their command. Based in part on Lang's 2007 design Midgard, the game was originally released on Kickstarter, raising just under $1 million. The game was well received, landing on the recommended list for the 2015 Kennerspiel des Jahres award for strategy game of the year. At the beginning of each of the game's three ages or rounds, each player is dealt eight cards, keeping one and passing the rest to the player on their left, until players have six cards. There are cards which give bonuses in battle, upgrades which give special abilities to a player's forces or allow players to recruit monsters to fight on their behalf, and quests give short term victory point objectives. Each player's clan of Viking forces begins the same, but quickly differentiates itself based on the drafted cards. After drafting cards, each player takes turns sequentially, using the game's resource, Rage, to perform actions. These include upgrading a clan's abilities and forces, having those forces invade the map, or pillaging provinces. Pillaging further improves one's clan and scores points, and can lead to battles with other players. Battles are resolved without luck - players secretly play a card and add that to the strength of their forces in that region to determine the winner. At the end of each age, a portion of the board is removed as Ragnarok approaches, sending any forces on that part of the map to Valhalla and earning players glory (victory points) for each of their forces that were thus destroyed. The game supports a variety of different strategies depending on which cards the players draft, from controlling territories, winning battles, or even having one's own forces be destroyed, if a player has drafted cards that give points and bonuses for being defeated. In strategies and mechanics, the game merges the traditions of American style games and eurogames, combining the conflict and strong theme prevalent in the former with the statistics, upgrades and lack of chance common in the latter. 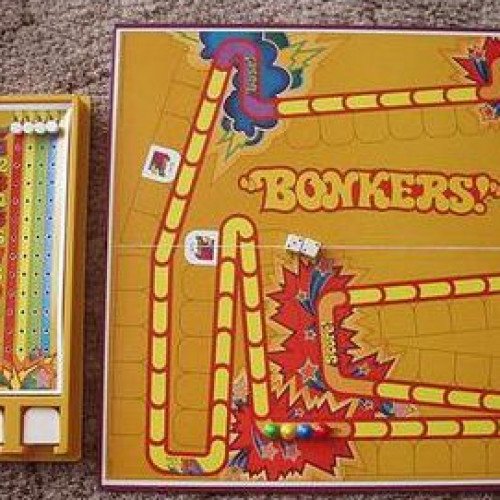 Bonkers! (also known as This Game is Bonkers!) is a race-style board game designed by Paul J. Gruen and produced first by Parker Brothers, later by Milton Bradley, and briefly reissued by Winning Moves. The object is to be the first player to score 12 points by adding instruction cards to the empty spaces in an attempt to move to several scoring stations. The game's slogan (for all versions) is "It's Never the Same Game Twice!" The board consists of a 55-space looping track. Most of these spaces have an outline of a track card next to it, the cards being played throughout the game; there are also three "Score" stations (one of which doubles as the starting point), a "Lose" space, two track spaces marked "Go to Lose", and one space marked "Back 15". As the original Bonkers! was produced in the late 1970s, the board and game pieces accordingly had a disco styled text and motif. When Milton Bradley revived the game in the early 1990s, the board was made to appear as if the entire track and logo were made out of modeling clay; a few humorous caricatures of human faces (also made from clay) were placed in the logo and on the board as well. The game was also given a fluorescent color scheme, updated fonts, and different styled dice and pawns from the original. The 2016 Winning Moves reissue returned to the original disco motif. The game starts with each player being dealt four track cards and a large "Go to Lose" card, and placing their pawns on the scoring space marked "Start". On a turn, a player rolls the dice, and moves the corresponding number of spaces shown. If the space is empty, the player places a track card in the outline next to that space and follows its directions; if already occupied by a card, the player follows the instructions on that card. A player's turn ends if landing on a space marked "Score" (scoring 1 point), the space marked "Lose" (deducting 1 point), or on an unmarked space after having already played one card. At the end of a turn, the player draws another card to replace any played during his or her turn, and the next player takes their turn. Most of the track cards have a number between 1 and 6, in additional to 10 and 12, as well as the direction for the player to travel. The track is a loop; as pawns travel counterclockwise along the loop, "ahead" cards move the pawn forward, and "back" cards move in reverse. Other cards include "Roll Again", "Go to Nearest 'Score'", "Go to Start", and "Exchange Cards" (in which the player swaps the Exchange card for any other card currently on the track.) If a space is occupied by another pawn, the player rolls again (except for the Lose space), while disregarding any instructions on any adjacent track card (but still scoring a point on Score spaces).