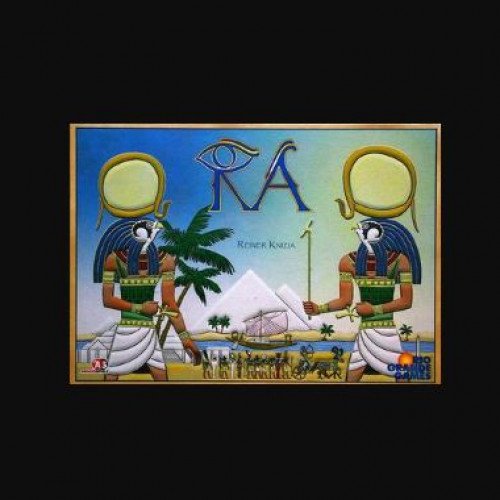 Ra is a board game for two to five players designed by Reiner Knizia and themed around Ra, the sun-god of Heliopolis in ancient Egyptian culture. Originally published in Germany, it was republished in an English language translation by Rio Grande Games. Subsequent English language editions have been published by Überplay and again by Rio Grande Games. The last of these increased the number of players from the original 3-5 to 2-5, but otherwise all editions have used the same rules. Ra won the 2000 International Gamers Award and placed 2nd in the 1999 Deutscher Spiele Preis. Ra is an auction game, where the players are all competing for the same resources. The game is played in three rounds, called Epochs, reflecting the history of ancient Egypt. Players use their sun tokens to bid against each other on auctions for tiles. At the end of an epoch, points will be scored for the number and types of tiles a player managed to win. The price of the tiles is determined by the players bidding for them, and values can shift rapidly. Players are faced with a constant balance between "what should be done eventually" and "what can actually be done now", which is a hallmark of many of Knizia's games, and of German-style board games in general. 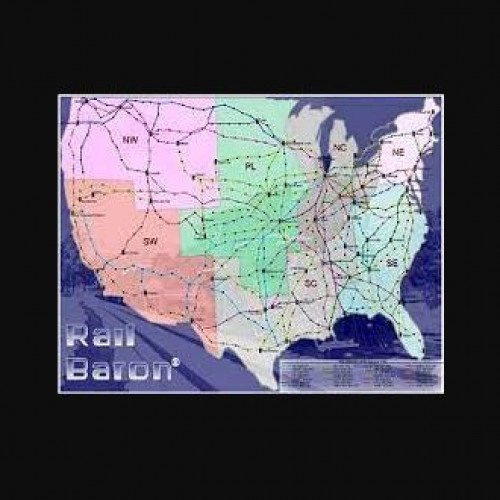 Rail Baron is a railroad board game for 3 to 6 players. Rail Baron was one of the first board games with a railroad theme, and helped establish a category known as train games. Rail Baron was initially published in the 1970s under the name Boxcars by the original designers R.S. Erickson and T.F. Erickson, Jr. It was soon acquired, renamed and reissued by the Avalon Hill Game Company where it became one of the company's top sellers. Rail Baron is played on a map of the United States on which the routes of 28 historic railroads, such as the Baltimore and Ohio Railroad and the Southern Pacific Railroad have been marked. The map is divided into 7 regions, Northeast, Southeast, North Central, South Central, Plains, Northwest and Southwest. Major US cities which are connected by the railroads act as destinations for travel. Dots on the railroad routes represent small towns along the way, and serve as distance markers for player movement. The goal of each player is to accumulate money by moving his or her train token to map destinations which are generated at random via a lookup table. Large cities like New York City and Chicago are more likely to be generated as destinations than small cities. Travel from one destination to the next is accomplished by rolling dice to determine distance that can be moved. Players then move their train token along map dots toward their destination. Upon arrival at a destination, the player collects a cash payoff, and may use the money to upgrade his or her train engine to a faster model, or purchase a railroad. Railroad purchases are key to the game because an owner collects substantial fees from other players who ride his or her railroad during their movement. Meanwhile, the owner can ride his or her own railroads at no cost. Thus, an important decision in the game is whether to buy a variety of railroads in order to gain access to all areas of the map for oneself, or to buy railroads in a given area in order to monopolize it and collect the valuable use fees from opponents.