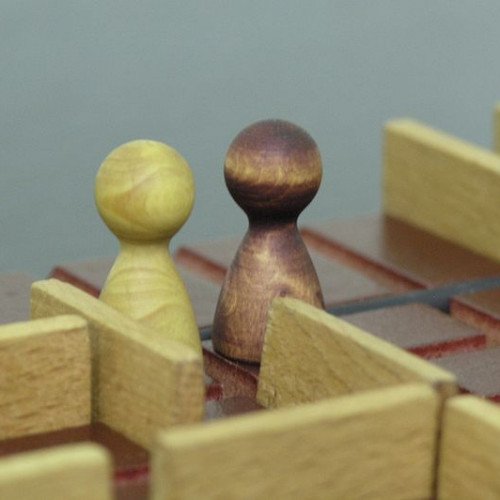 Quoridor is a 2 or 4-player intuitive strategy game designed by Mirko Marchesi and published by Gigamic Games. Quoridor received the Mensa Mind Game award in 1997 and the Game Of The Year in the USA, France, Canada and Belgium. Quoridor is played on a game board of 81 square spaces (9x9). Each player is represented by a pawn which begins at the center space of one edge of the board (in a two-player game, the pawns begin opposite each other). The objective is to be the first player to move their pawn to any space on the opposite side of the game board from which it begins. The wall A is legal. Wall B is illegal because it does not face two spaces on each side. The distinguishing characteristic of Quoridor is its twenty walls. Walls are flat two-space-wide pieces which can be placed in the groove that runs between the spaces. Walls block the path of all pawns, which must go around them. The walls are divided equally among the players at the start of the game, and once placed, cannot be moved or removed. On a turn, a player may either move their pawn, or, if possible, place a wall. Legal pawn moves Legal pawn moves according to the location of the opponent and the walls. Pawns can be moved to any space at a right angle (but not diagonally). If adjacent to another pawn, the pawn may jump over that pawn. If an adjacent pawn has a third pawn or a wall on the other side of it, the player may move to either space that is immediately adjacent (left or right) to the first pawn. Multiple pawns may not be jumped. Walls may not be jumped, including when moving laterally due to a pawn or wall being behind a jumped pawn. Walls can be placed directly between two spaces, in any groove not already occupied by a wall. However, a wall may not be placed which cuts off the only remaining path of any pawn to the side of the board it must reach. 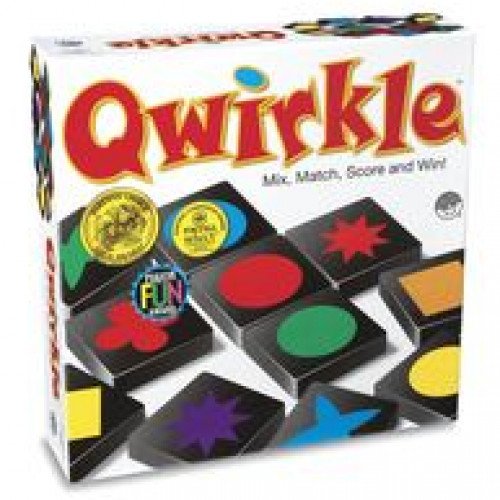 Qwirkle is a tile-based game for two to four players, designed by Susan McKinley Ross and published by MindWare. Qwirkle shares some characteristics with the games Rummikub and Scrabble. It is distributed in Canada by game and puzzle company Outset Media. Qwirkle is considered by MindWare to be its most awarded game of all time. In 2011, Qwirkle won the Spiel des Jahres, widely considered the most prestigious award in the board and card game industry. A sequel, Qwirkle Cubes, was released by Mindware in 2009. Qwirkle comes with 108 wooden tiles, and each tile is painted with one of six shapes (clover, four-point star, eight-point star, square, circle and diamond) in one of six colors (red, orange, yellow, green, blue and purple). The box also contains a bag to store the tiles and a rule book. The game begins with all the tiles being placed in the bag and mixed thoroughly. Each player then randomly draws six tiles. During their turn, a player may either: place one or several tiles on the table; or instead of playing tiles, exchange one or more tiles in their hand for other random tiles. In general, any tiles that are placed in a row must share one attribute (either color or shape), and they must be played in one line, although they do not need to touch other tiles being placed in that turn. A player must always end a turn with six tiles, so, if they place tiles during a turn, they draw random tiles to build their hand back up to six. Play continues until one person uses all of their available tiles and there are no more tiles to be drawn.