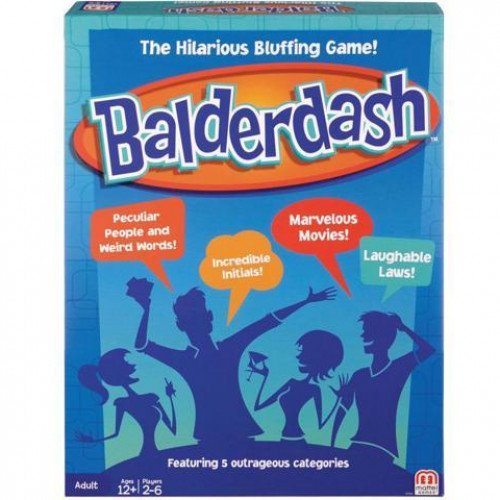 Balderdash is a board game variant of a classic parlor game known as Fictionary or "The Dictionary Game". It was created by Laura Robinson and Paul Toyne of Toronto, Ontario, Canada. The game was first released in 1984 under Canada Games. It was later picked up by a U.S company, The Games Gang, and eventually became the property of Hasbro and finally Mattel. The game has sold over 15 million copies worldwide to date. It is aimed at fans of word games, such as Scrabble. Balderdash is based on an earlier game, Fictionary, of essentially similar gameplay, varying in that obscure words are found in an unabridged dictionary instead of the definitions and meanings provided on cards. They are then read out to the unsuspecting individual. The board game version was created by Laura Robinson and Paul Toyne of Toronto, Ontario, Canada. From a high level, this game presents rare and unusual words, the players secretly submit definitions for the words, hoping that other players will believe their definition is the real one. Two things lead to victory: an excellent vocabulary and the ability to "pile it high and deep". The game begins by all players rolling a die, with the high roll chosen to be the first "dasher". The dasher draws a "definition card" from the supplied box, and rolls the dice to decide which of the words listed there is to be used. Then the dasher writes the definition of the word (as supplied on the card) on a piece of paper. All other players then write down a definition, which may be an honest attempt to supply the correct definition, or, if they do not know or for tactical reasons decide not to, a fictitious definition for the word designed to sound convincing. The players hand their definitions to the dasher. Players submitting the correct definition are immediately awarded three points, and, if there is more than one, the round is abandoned (though the points are retained). The definitions, including the real definition, are then read out in random order. Players record which answer they believe is correct. Players are awarded two points if they guess the correct definition. Players are awarded one point for each other player who incorrectly chooses the fake definition they wrote. The dasher is awarded three points if no one guesses the correct definition. Players move their tokens around the game board one square for each point awarded. The role of dasher then passes to another player. The winner is the individual whose token reaches the end square first. 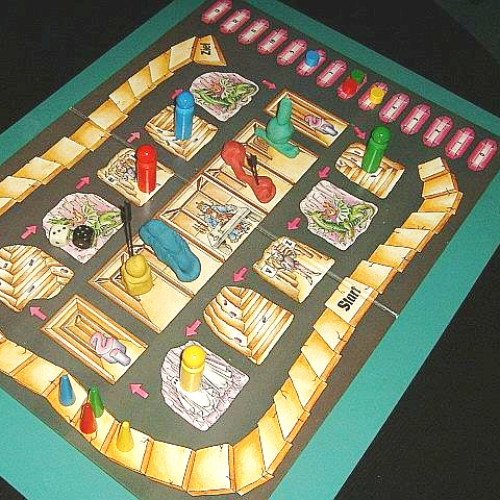 Barbarossa is a plasticine-shaping German-style board game for 3 to 6 players, designed by Klaus Teuber in and published in 1988 by Kosmos in German and by Rio Grande Games in English. Barbarossa won the 1988 Spiel des Jahres award. The game is played on a circular board, with three tracks running around it. Around the outside are the scoring track and the elfstone (money) track. Further in there is a circular track with twelve marked spaces on it, and in the center there is a space for sculptures. Later editions of the game change the shape of the board but not its contents. At the start of the game, each player chooses two objects from a list provided and creates plasticine sculptures of each, and places them in the middle of the board. Each player places on the board three tokens: a magician, a witches' hat and an Elfstone. The hats are placed on the scoring track; the elfstones are placed on the elfstone track, and the magicians are placed on the space marked "A". Each player receives three curse tokens. Players then take turns as follows: They may begin either by rolling a six-sided die and moving their magician that many spaces, or by forfeiting their roll and instead spending elfstones to move. After they roll or spend elfstones, what happens next depends on the space they land on: