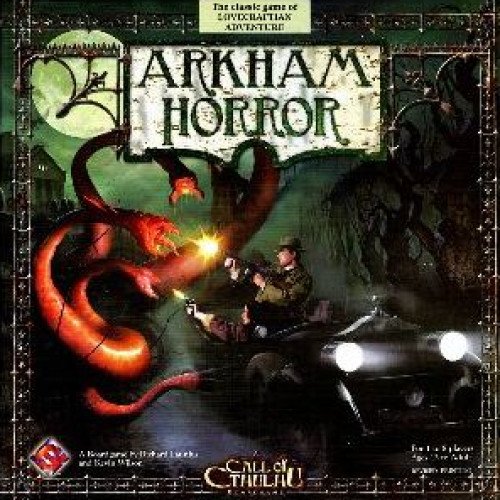 Arkham Horror is a cooperative adventure board game designed by Richard Launius, originally published in 1987 by Chaosium. The game is based on Chaosium's roleplaying game Call of Cthulhu, which is set in the Cthulhu mythos of H.P. Lovecraft and other horror writers. The game's second edition was released by Fantasy Flight Games in 2005, with a third edition in 2018. The game board is set in Lovecraft's fictional Massachusetts town of Arkham in 1926. Street, building and outdoor locations are featured. Gates to other planes open throughout the town (represented by tokens placed on the board.) Players take on the role of investigators, represented by a character card. Each investigator has several attributes (such as "sanity"), and cards representing items, spells, and other things. The investigators travel through the city, avoiding or fighting the monsters that enter through the gates, visiting city locations to acquire tools, and ultimately entering the gates. After traveling to the other world and returning, the investigator can try to close the gate. While exploring city locations or other worlds, the investigators face random events which may benefit or harm them. As gates open, a "Doom Track" advances; if the track reaches its end, a powerful horrific creature known as the Ancient One breaks through into Arkham. In the 1987 edition of the game, this ends the game, and all players lose. In the second edition, when the doom track fills, this typically begins a final opportunity for the players to directly defeat the creature and win; otherwise they lose. 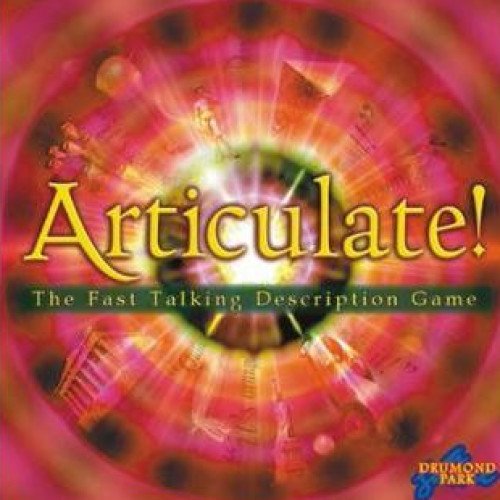 Articulate! is a board game from Drumond Park, for 4 to 20+ players aged 12 and up with original concept by Andrew Bryceson.[1] Articulate! players describe words from six different categories (Object, Nature, Random, Person, Action and World) to their team as quickly as possible. The teams move round the board based on the number of words correctly guessed, and occasional spinner bonuses. The object of the game is to be the first team to get around the board to the finish space. There is also a children's version called Articulate for Kids and a new version was released in 2010 called Articulate Your Life. The game is played by the teams taking turns to play. When a team is playing a 30 second timer is started and the describer(s) will describe as many words from the relevant category to the guesser(s) in this time. The describer(s) can gesticulate and act but can't say the word itself, the length, the starting letter, any derivative or what it rhymes with or sounds like. The team's piece moves forwards how many words were correctly guessed and unless the piece lands on the red, orange or white space the next team will take their turn: If the piece lands on a red or orange space the team will spin the spinner in the centre. Depending on what space is landed on the team will be able to take a different action. A wide green segment will result in a movement forward of two steps for your piece or backwards two steps for another team. A narrow green segment will be the same as the wide but three spaces and an orange or red space results in no action. Then pass the turn on as normal. If the piece lands on a white space a control turn is played where the describer(s) from that team describes a word to all teams and the first team to guess correctly has their turn regardless of the order. When a team reaches or passes finish space they will trigger a control turn and if they win that then they win the game. If they lose then they end their turn and will trigger another control turn on their next turn if they are still at the finish space.