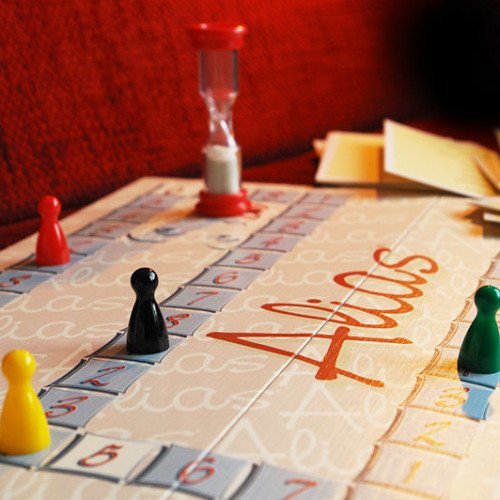 Alias is a board game, where the objective of the players is to explain words to each other. Hence, Alias is similar to Taboo, but the only forbidden word in the explanations is the word to be explained. The game is played in teams of varying size, and fits well as a party game for larger crowds. The game is very competitive. Alias has been developed in Finland and is produced by Nelostuote Oy under the brand name Tactic. The game has been on the market since the early 1990s and is one of the most popular party games in Finland. Over the years, many different versions of the board game have appeared: As well as the New Alias, the Alias family currently also includes the Junior Alias for children, the Alias travel game, and as the newest introduction, DVD Alias. The name Alias comes from the word alias, meaning also known as. The board in Alias is a "path" consisting of sequential curving numbers on a red background. The game contains 8 numbered groups. The game is divided into turns of about one minute of length. The teams play in turns, and on each team's turn, one of the team members has to explain words on word cards to the other team members. The other team members take guesses at the word, and words that have been correctly guessed earn the team one point per word. Explanation mistakes (meaning the explainer uses the word to be explained, part of it, or a derivative of it), and words passed over without being guessed take points away. The players move on the board as many places as they have earned points on their turn. If, for example, the team lands on the number 7, the word to be explained from the cards is word number 7. The first team to reach the goal wins. The game is recommended for players over 7 years. 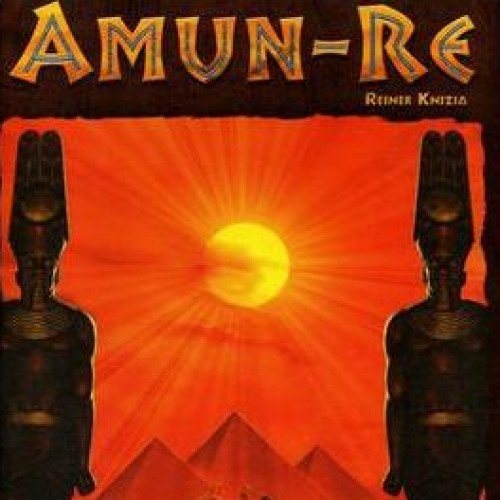 Amun-Re is a game designed by Reiner Knizia and first published in 2003 by Hans im Glück in German and in English by Rio Grande Games. Players are leaders of different Egyptian dynasties who try to gain influence in 15 provinces of ancient Egypt. Influence and building pyramids earns points for the players. Points are scored at two instances during the game, at the end of the "Old Kingdom" and at the end of the "New Kingdom", and the player who amasses the most points wins the game. Amun-Re is played in six rounds, where each round consists of an auction of provinces, followed by the purchase of "power cards" (for special use or that give bonuses in scoring), farmers (that generate income), and bricks (which are converted into pyramids on a three-for-one basis), a sacrifice phase, and then income. All prices in auctions, as well as for purchases, are based on the triangular numbers. The number of provinces available for auction in each round is equal to the number of players, but it is randomly determined which provinces will be available. Each province gives the player who wins it different abilities. For example, some provinces can support more farmers, some allow the players to buy more cards, and some produce a set income automatically. Certain power cards also give game-end bonuses if a player's provinces meet certain conditions, such as being on the same side of the Nile. Once the provinces have been auctioned, players may buy power cards and farmers as allowed by the provinces that they own, and as many bricks as they want or can afford. Following purchases, there is a sacrifice where each player either sacrifices a number of gold or can steal from the sacrifice (and a player must either sacrifice or steal, "sacrificing" 0 gold isn't allowed). Rewards are given to players based on their sacrifice (highest sacrifice receiving the most reward, "thieves" getting no reward beyond the three gold they steal). Players may choose whether they wish to receive cards, bricks, farmers, or some combination of these as rewards. Finally, players receive income. The sacrifice that has just taken place determines the income generated by each farmer. In certain provinces, income is only generated if the sacrifice is below a certain level. Other provinces provide a fixed amount of gold, or a combination of farmer income and fixed income.