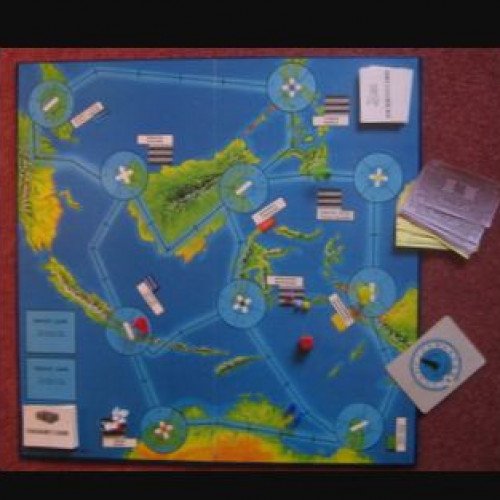 Air Charter is a board game previously published by Waddingtons. The game is named after the concept of air charter, the commercial use of aircraft on non-established flight routes. The game is set in Australasia and Southeast Asia. The scenario involves a number of small companies competing for air freight business where the transportation is between the lesser known airfields. There are 2 games, the short game designed more for younger players and as an introduction to the basic flying rules of the game. The more complex full game involves more by way of trading strategy. The history of Air Charter can be traced back to 1970. It was made around the same time as a similar game called The Business Game which was originally known as Mine a Million by John Waddington Ltd (aka Waddingtons). Each player is represented by a small plastic aircraft with a peg for carrying the freight tokens. There are four aircraft differentiated by colour. The aircraft are moved around the flight paths between airfields making use of a single die. The games also includes the playing board representing a map of Australasia and Southeast Asia, four fuel gauges, freight cards, incident cards, paper money and several plastic pyramid shapes representing freight of three types, special foodstuffs (white), basic foodstuffs (white) and machinery (coloured). The board is marked up with airfields which are connected by air lanes. Airfields have runways, some with two at right angles to each other some with just one. Every airfield has a Control Area where the planes circle before landing. Four of the airfields, Manila, Makassar, Derby and the Palau Islands act as home airfields for the four players. Finally the airfield has a warehouse where the foodstuffs and machinery tokens (pyramids) are stored. The fuel gauges are marked off in fuel units and freight units. Each fuel unit represents 70 gallons of aviation fuel. The more fuel a plane carries the less freight it can carry. 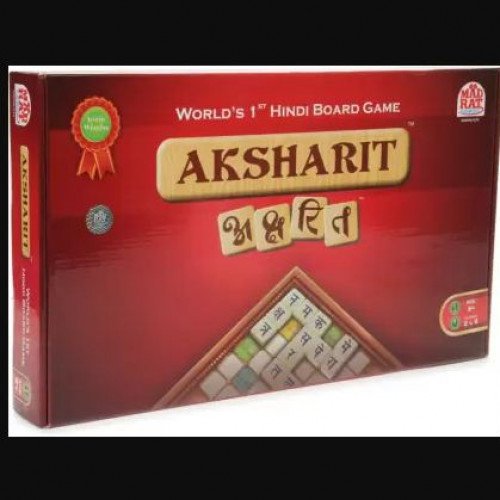 Aksharit is the first word game for Indian languages developed and marketed by MadRat Games Pvt. Ltd. It is a board game based on the Hindi language. The game is loosely inspired on crosswords, but is purported to be designed to have specific pedagogical utility in Hindi language learning. Aksharit is used in 3000 schools throughout India and has been used by over 300,000 children. It's also available in 10 other major Indian languages. It's available in the digital form on Nokia's Symbian3 platform and on Intel AppUp. It has been a recipient of the Manthan Award and has been recognized at conferences such as TechSparks and INKtalks. Aksharit was conceptualized by Manuj Dhariwal, while he was pursuing his bachelor's degree in design from Indian Institute of Technology Guwahati, for his final year design project. In 2009, Manuj presented a business plan to market Aksharit at a business plan competition conducted by Indian Institute of Management Calcutta, which he went on to win. Rajat and Madhumita, both graduates in Computer Science and Engineering from IIT Bombay, had taken up teaching at Rishi Valley School in Andhra Pradesh. They had devised a number of innovative games to teach their respective courses. The three of them, came together and incorporated MadRat Games Pvt. Ltd in January 2009, with Aksharit as their flagship product. Aksharit is Patent Pending (Patent Number : 294/DEL/2010)