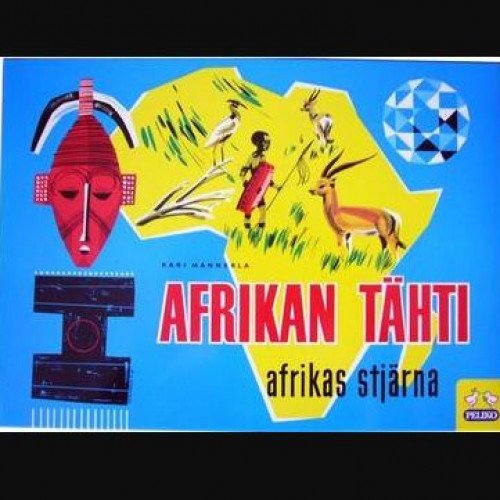 Afrikan tähti Finnish: Star of Africa), known in Swedish as Den försvunna diamanten (The Missing Diamond) or Afrikas stjärna meaning "the star of Africa", is a Finnish board game designed by Kari Mannerla originally in 1951. It has been one of the most popular board games in the Nordic countries for decades. The board game was first published year 1951 in Helsinki, Finland. Stories of the world's largest diamond – the Star of Africa – had inspired the imagination of young Kari Mannerla. He managed to get a hold of a map of Africa in the English language and picked exotic sounding places. He then drafted land, sea and air routes arbitrarily across and around the continent. During his design process, an important innovation was that players could pick their route of choice, instead of following a pre-set course. A further revelation was the tokens that are shuffled before each game and placed randomly throughout the board. None of the players know which surprise is hidden under each token. The robbers and horseshoes were considered to add to the excitement of the game. Afrikan tähti was the last of Kari Mannerla's games. He was then already an ‘experienced’ 19-year-old game designer and he intuitively sensed that this one was unique. He offered it to the large book publishing company Tilgmann. Price negotiations took a few years and finally he accepted a modest compensation for 10,000 printed games. His condition to the publisher was that any further prints would be negotiated separately. This was not an issue to the publisher because board games typically didn't get printed again. This time it was different. Already the following year another 10,000 were printed and after that every year more and more. Over 100,000 games were sold in seven years, which is a record amount even today. Afrikan tähti has remained one of the most sold board games in Finland for 65 years. During this time it has been translated to over 16 languages. It is most popular in the Nordic countries, where it became widely marketed in Sweden, Norway and Denmark in 1960. In Sweden the game is called Den Försvunna Diamanten, in Norway Den Forsvunne Diamanten (both meaning "The Lost Diamond") and in Denmark Afrikas Stjerne (Star of Africa). In Finland over two million games have been sold, in Sweden and Norway almost one million and in Denmark half a million. There are over 4.5 million sold games internationally. During his retirement years Kari Mannerla revived one of his old creations Inkan aarre ("The treasure of the Inca") in a completely modified version. Inkan Aarre has sold over 100,000 in Finland. Both games are nowadays directly copyrighted to Kari Mannerla's five daughters. 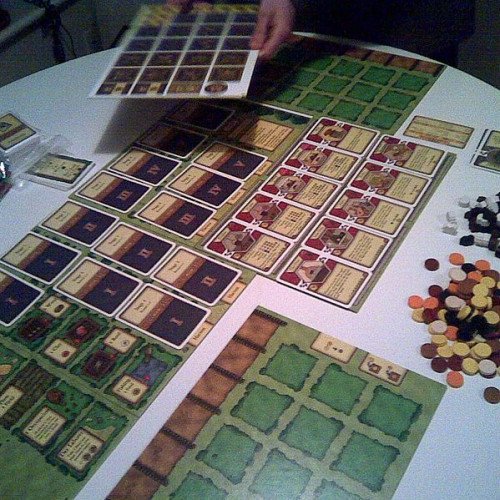 Agricola is a Euro-style board game created by Uwe Rosenberg. It is a worker placement game with a focus on resource management. In Agricola, players are farmers that sow, plow the fields, collect wood, build stables, buy animals, expand their farms and feed their families. After 14 rounds players calculate their score based on the size and prosperity of the household. The game was published by Lookout Games and released at Spiel 2007, where it was voted second-best game shown at the convention, according to the Fairplay in-show voting. The game was released in English by Z-Man Games in July 2008. Playdek released an iOS conversion of the game in June 2013. A second edition of Agricola was published by Mayfair Games in May 2016. Agricola won the Spiel des Jahres special award for "Best complex game 2008" and the 2008 Deutscher Spiele Preis. It was also the game which ended Puerto Rico's run of more than five years as the highest-rated game on the board game website BoardGameGeek, staying at the top of the rankings between September 2008 and March 2010. As of February 2019, Agricola is ranked 31st among all board games on BoardGameGeek. A two player version called Agricola: All Creatures Big & Small was released in 2012. There is also a corresponding iOS app. Players start the game with a farming couple living in a two roomed hut. Each round, they take turns to place their family members on action spaces to get resources and improve and grow their households. Only one family member can occupy each action space within the same round, so players need to time their actions to get maximum profit while denying progress to the opponents. The game is played in 14 rounds, divided by 6 harvests. At each harvest, food is grown, people are fed, and animals multiply. Players lose victory points if they have trouble feeding their family, which makes food production a major point of tension in the game. At the end of round 14 comes the final harvest after which victory points are counted. Scoring in Agricola rewards a middle of the road strategy. Players are penalized for not focusing on any one aspect of the game, and stop scoring in any area they focus on too much. The player with the most balanced and prosperous farm wins.