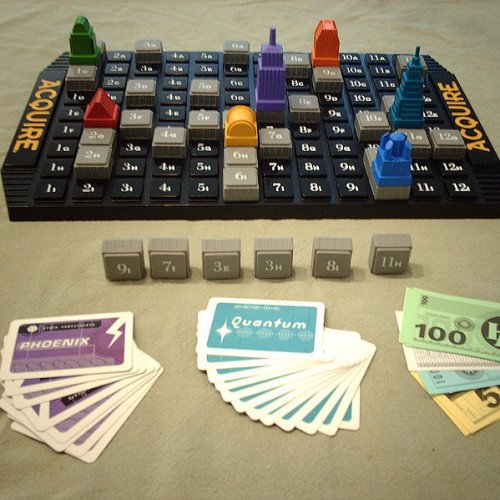 Acquire is a multi-player mergers and acquisitions themed board game. It is played with tiles representing hotels that are arranged on the board, play money and stock certificates. The object of the game is to earn the most money by developing and merging hotel chains. When a chain in which a player owns stock is acquired by a larger chain, players earn money based on the size of the acquired chain. At the end of the game, all players liquidate their stock in order to determine which player has the most money. It was one of the most popular games in the 1960s 3M bookshelf game series, and the only one still published in the United States. Acquire started life as the Milton Bradley gambling-themed board game Lotto played in childhood by Sid Sackson, who went on to become a game designer. He reworked the game into a wargame he called "Lotto War". Sackson (along with Alex Randolph) was commissioned by 3M to start a new games division in 1962. When he submitted the game to 3M in 1963, he called the game "Vacation". 3M suggested the name change to Acquire, and Sackson agreed. The game was test marketed in several U.S. cities in 1963, and production began in 1964 as a part of the bookshelf games series. The 3M game division was sold to Avalon Hill in 1976 and became part of their bookcase game series. Avalon Hill made Computer Acquire for the PET, Apple II and TRS-80 in 1980. The Avalon brand became part of Hasbro in 1998. Hasbro slightly reworked and reissued the game in 2000, but thereafter discontinued it. In the mid-2000s, the game was transferred to a Hasbro subsidiary Wizards of the Coast. Wizards celebrated "50 years of Avalon Hill Games" with the release of the 2008 edition (though the game was not yet 50 years old). In 2016, the game was transferred back to the Hasbro games division and republished in Nov. 2016 under the Avalon label. In most versions, the theme of the game is investing in hotel chains. In the 1990s Hasbro edition, the hotel chains were replaced by fictitious corporations, though the actual gameplay was unchanged. In the current Avalon edition, the companies are once again hotel chains. The components of the game have varied over the years. In particular, the tiles have been made from wood, plastic, and cardboard in various editions of the game. In the 2008 version, the tiles were cardboard. In the 2016 version, the tiles are plastic, but the board size was reduced, from 9x12 to 10x10. 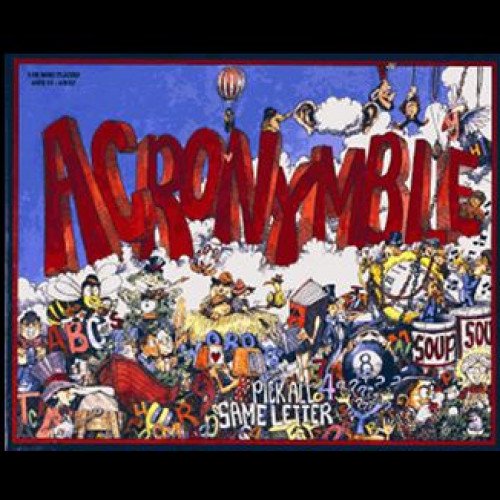 Acronymble is a board game published in 1991. It challenges players to create funny acronyms (known as noodles) from a random sequence of letters. Acronymble was developed by Acronymwits Inc. in 1991, and designed by Steven May. An Acronymble game show spoof was later produced using the premise. It aired on public access television in Massachusetts and won the Massachusetts Cable Commission award for "Best Entertainment and Variety Show" in 1997. There are online versions of Acronymble played under a number of different names, Acrophobia being the most popular (Acronymble predates all of these). The only differences between Acronymble and these online versions is that they offer players only random letters to work with, and they often ask competitors to write their acronyms on a specific subject.