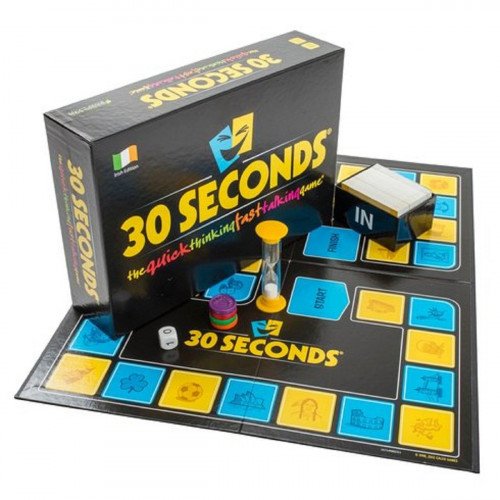 30 Seconds is a South African fast-paced general knowledge game. Players generally play in teams of two to sixteen. One player must guess a word from their teammate's explanation, much like Charades, with the aim to guess as many possible answers in 30 seconds. The main restriction on the explanation is that it may not contain the actual word or part of the word. Each team moves a token along a track formed by a sequence of squares. Each square has a different picture on it. Each round the team draws a card and then has 30 seconds to explain up to five different words printed on that card. The team can move forward one square for each correct answer. The objective is to reach the end of the track first but the team who started second needs to play last. At the start of each round, the team throws the special 30 Seconds dice to determine that round's handicap. The dice has six sides and the values can be 0, 1 or 2. One player draws a card. Each card has a yellow side and a blue side. The player must use the side that corresponds the square that their token is on. There are five words printed on each side. The opposing team then turns over the 30-second timer. The team's score is determined by taking the number of correct answers and subtracting the handicap. The team moves their token forward by the same number of squares as their score for the current round. 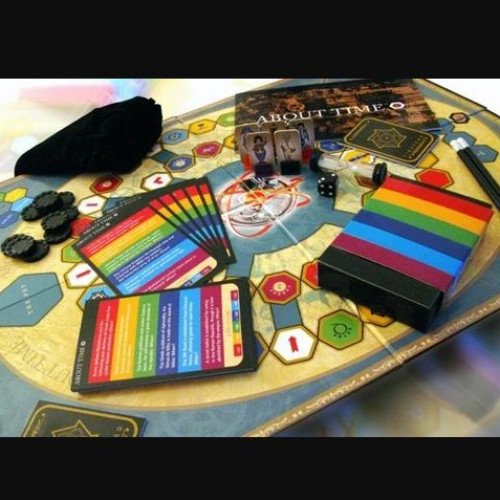 About Time is a general knowledge historical board game first seen on Series 5 of the BBC new-business reality show Dragon's Den on December 17, 2007. The game was invented by Joe Gill, Iain McGill, Matt Gould and Michele Rosaus, who together formed a company, Circa Circa Ltd, to launch the game in the UK. The game’s distinctive artwork is by Michele Rosaus. The game is part of a growing subgenre of trivia games in which players compete by giving numerical answers, in this case years, to questions rather than factual answers. Players progress by giving answers that are closest to the correct year on the question cards. The question cards all feature six events and a year in which the events took place. Chips are used as rewards and can be won or lost during high-stakes board play. Each card contains questions in six subject categories including arts, politics, everyday life and innovation. Player pieces are iconic historical figures including Napoleon, Queen Elizabeth I, Genghis Khan and William Shakespeare. In 2008, in a promotional tie-in with The Guardian newspaper, About Time used the newspaper’s archive to add content to the game. In Germany, a German language edition of the game, About Time Das Zeit Spiel, was launched in 2009 in association with Die Zeit, the Hamburg-based weekly newspaper. The game contains content from the newspaper. About Time, USA Edition, was launched in 2009.