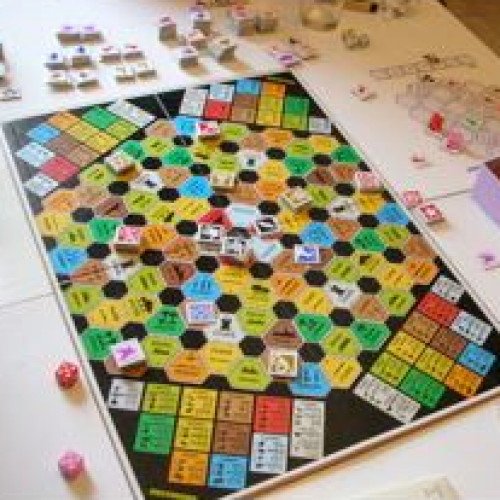 Titan is a fantasy board game for two to six players, designed by Jason B. McAllister and David A. Trampier. It was first published in 1980 by Gorgonstar, a small company created by the designers. Soon afterward, the rights were licensed to Avalon Hill, which made several minor revisions and published the game for many years. Titan went out of print in 1998, when Avalon Hill was sold and ceased operations. A new edition of Titan, with artwork by Kurt Miller and Mike Doyle and produced by Canadian publisher Valley Games became available in late 2008. The Valley Games edition was adapted to the Apple iPad and released on December 21, 2011. Each player controls an army of mythological creatures such as gargoyles, unicorns, and griffons, led by a single titan. The titan is analogous to the king in chess in that the death of a titan eliminates that player and his entire army from the game. The player controlling the last remaining titan wins the game. The main game board consists of 96 interlocking hexes, each with a specified terrain type and color. Each player's army is organized into "legions" of one to seven creature tokens stacked face down. The legions move according to die roll, subject to restrictions marked on the board—Most board spaces can only be entered or exited from certain directions. No two legions may occupy the same hex on the game board. If a legion moves into a hex which is occupied by an enemy legion, the two legions must fight to the death on a tactical map specific to that terrain. The terrain usually gives a battle advantage to creatures native there. Each time a legion moves, it may recruit one additional creature if the territory to which it moves is native to at least one creature already in the legion. For example, centaurs may recruit in the plains and woods, ogres may recruit in the marsh and hills. Each creature may recruit its own kind, but multiple weak creatures may be eligible to recruit more powerful creatures. For example, one ogre in the marsh or hills may recruit only another ogre, but two ogres in the marsh may recruit a troll, while three ogres in the hills may recruit a minotaur. The victor of each battle is awarded points based on strength of the creatures vanquished. For each hundred points a player earns, he is awarded an angel, a strong creature which can teleport from its own legion to aid an attacking legion in future battles. Also, for each one hundred points a player earns, his titan becomes stronger in battle. Finally, at four hundred points, a player's titan gains the ability to teleport on a roll of six, attacking any enemy legion regardless of position. 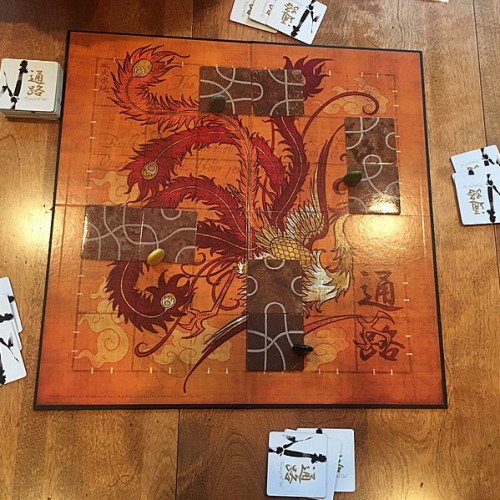 Tsuro is a tile-based board game designed by Tom McMurchie, originally published by WizKids and now published by Calliope Games. Tsuro is a board game for two to eight players. To play, players compete to have the last playing piece remaining on the board. Player turns consist of placing tiles on the board from the player's hand. Then they move their respective pieces along these paths. Players are eliminated by following a path that ends at the board edge. There have also been a number of differently themed Tsuro editions and expansions released, beginning with Tsuro of the Seas. Although core gameplay remains the same, some of versions feature expanded rules or larger boards. The name of the game is taken from the Japanese word tsūro (wikt:通路) meaning "route". The word, written in kanji, appears in the art on the game board. The game is played on a square board that is divided into a six-by-six grid of squares. Before the game begins, each player chooses a different colored playing piece and places them on any of the white notches that surround the edge of the board. Each player also holds three tiles. After each turn, they draw another card. There are thirty-five standard tiles and one Dragon tile. To play, the player must place a tile in the square in front their piece. Once placed, the piece moves along the line in front of it. If another player places a tile that connects to the line the player's piece is on, the player must move their piece to the end of the line. Sometimes this will cause the piece to go off the board, in which the player is eliminated. If two pieces end up on the same path, both players are out. The Dragon tile is only used when there are three or more players. When there are no more tiles to draw from, the player takes the Dragon tile. This is to indicate that they will be the first one to draw from the deck after the eliminated players give up their unplayed tiles.