"SENTINELS OF THE MULTIVERSE" vs "SHADOWS OVER CAMELOT" 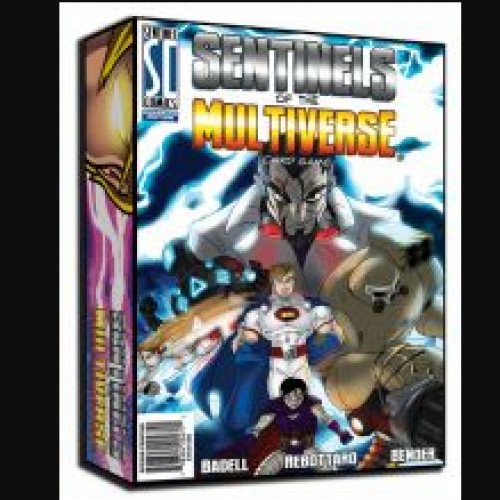 SENTINELS OF THE MULTIVERSE

Sentinels of the Multiverse is a cooperative card game published by Greater Than Games and released at Gen Con 2011. Players control a team of comic book-style heroes battling a villain. Each player controls one or more heroes, while a villain and environment deck each run themselves. A given game includes 3 to 5 heroes, 1 villain and 1 environment, which can be mixed and matched to create a number of different scenarios. The core game comes with 10 heroes, 4 villains, and 4 environments. The board game has also been made into a mobile app game: Sentinels of the Multiverse: The Video Game. Sentinels of the Multiverse is a cooperative card game for up to five players. The game mechanics of Sentinels of the Multiverse include aspects that are somewhat similar to a variety of other card games, including Magic: The Gathering and Dominion. The game is played with three different types of decks of cards: Heroes, Villains, and Environment. Hero decks include (usually) one card that represents the hero. It gives the hero's initial hit points and a power they may use. If the hero loses all of their hit points, the hero card is flipped over and the hero cannot play any cards or use any powers, but instead has three incapacitated abilities that can be used for the hero to continue to help their allies. Hero decks also contain forty other cards representing ongoing abilities, equipment, and one-shots that can be played. The heros lose the game when all of them are incapacitated. Villain decks also include (usually) one card representing the villain. This card includes their starting hit points, rules for setting up the villain at the start of the game, abilities they take each turn, and a mechanism by which the card may be flipped over. The flipped version of the villain card represents another phase of the fight. Each villain has different flip mechanics. Villain decks also contain twenty-five other cards with one-shots, ongoings, minions, devices, and other types of cards that might be put into play. Villains are generally defeated when reduced to zero or fewer hit points, but may also have other win and/or lose conditions. Environment decks represent the environment in which the heroes battle the villain. The environment deck can affect both heroes and villains. Cards in this deck include persistent effects that remain in play until certain conditions are met, one-shots, and neutral targets. Many environment cards can be dismissed if the heroes agree to discard cards or skip turns. 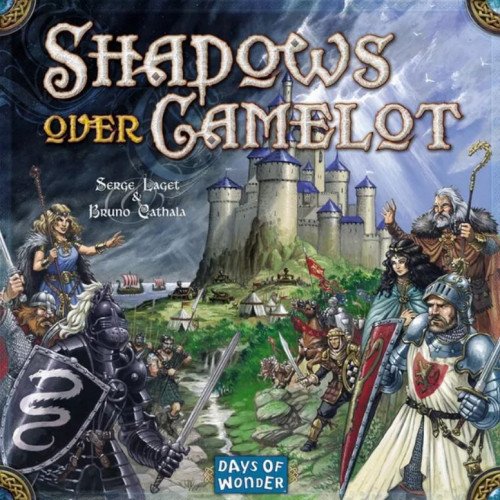 Shadows over Camelot is an Arthurian-themed board game designed by Serge Laget and Bruno Cathala, illustrated by Julien Delval and Cyrille Daujean. The game was unveiled by the publishers Days of Wonder at the 2005 American International Toy Fair and was more widely released in May and June 2005. The game was also published in French as Les Chevaliers de la Table Ronde and in German as Schatten über Camelot. In 2008, an expansion for Shadows over Camelot was released titled Merlin's Company. Players take on the roles of Knights of the Round Table (with the possibility that one player takes the role of traitor) and play the game by fulfilling quests. The game is cooperative in that a shared victory or loss is possible in the absence of a traitor, and a traitor does not benefit by revealing himself too early. The endgame with a revealed traitor is, by contrast, a competitive game of asymmetric teams. This game was featured in an episode of Geek & Sundry's Tabletop on October 3, 2013 and Table Flip on March 29, 2014. Shadows over Camelot is a cooperative board game, a genre in which players work together in order to try to defeat a game system which itself is moving the game toward defeat for all the players. However, there is a chance that one knight is secretly a traitor, plotting the downfall of the others loyal to Camelot. The existence of the traitor turns a fairly simple game system into a hotbed of paranoia and accusation. Each turn a player must first suffer the "progression of evil". They either decrease their health, add a siege engine to those attacking Camelot, or draw a black card, which will usually make one of the quests harder to complete. After the progression of evil, each player takes a heroic action, which includes moving to or returning from a quest location, advancing a quest toward victory, playing a "special white" card, discarding three identical cards to gain one life point, or accusing one knight of being a traitor. In addition, while at Camelot, the player has the option of fighting a siege engine or drawing two white cards in addition to the normal heroic actions. Finally, each player may choose to lose one health point to perform a second, different heroic action. For example, a player may move to a quest, choose to lose one health point, and begin to advance the quest toward victory, a series of actions that would otherwise require two turns. Moreover, each player also has a "special power", which can be performed once per turn in addition to his or her heroic action(s).