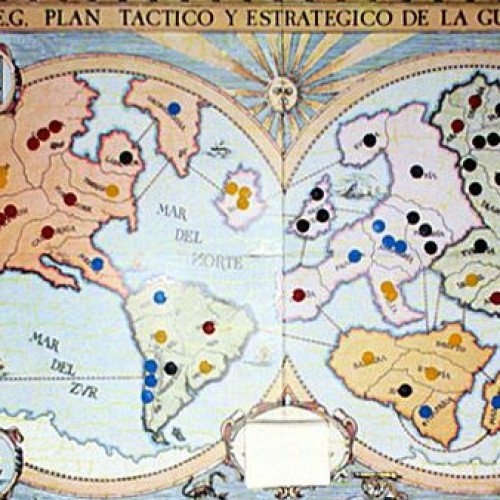 TEG is an Argentinian strategy board wargame published in 1976, based on the game Risk. The name is an acronym of Plan Táctico y Estratégico de la Guerra, Spanish for Tactical and Strategical War Plan. TEG follows a gameplay quite similar to the strategy board game Risk, since it also features a board divided in many different regions and sub-regions along with the implementation of dice to decide battle results. The board is divided into six continents which consist of a certain number of countries each; the total number of countries present in the game board is 50. These countries were randomly selected, and continents are slightly misrepresented. The game appeared once in the film Kamchatka. Although the film takes place in 1976 and their protagonists (Ricardo Darín and Cecilia Roth) are shown playing TEG, the game was still not released for public sale. Kamchatka is the Russian northeastern state which a character uses as his last resort to win the game, thus alluding to the family situation of hiding away from the government. It has been also referenced in a diapers TV advertisement, in which -among other criteria- the mother and the father play TEG in order to decide who cleans the baby ("China ataca Kamchatka" : "China attacks Kamchatka" the woman says). 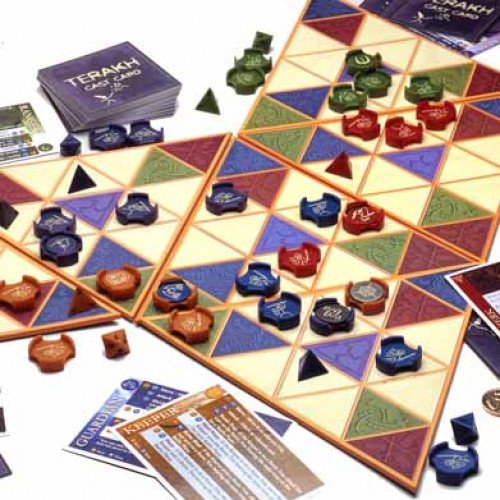 Terakh is a board game produced by Stoneplay and originally released in 2005. The game is named after its Canadian inventors Terence Wong and Akhil Patel. Terkah is a turn-based game for two to six players. The game is played on a variable board composed of triangularly shaped panels pieced together by players. Each panel contains sixteen triangular tiles. When combined, the board serves as a battlefield upon which players combat one another's troops, relying on a combination of strategies and elements of luck. Each troop is made up of six units and a leader. The primary objective of the game is to "be the last to remain", or, to have the strongest leader standing, and in doing so, eliminating all other leaders controlled by opponents. The history of Terakh dates back to 1999, when Wong first began conceptualizing the game. Since Terakh's release in 2005, several revisions of the manual have been made available. The tetrahedron piece (D4) is called an Elder. He is the leader of a player's troop. The objective of the game is for players to protect their Elders from being attacked. The D4 serves as an endurance indicator for the Elder. Starting with 4 Hit Points (HP), 1 HP is taken off for each time that the Elder has been successfully attacked. A player is eliminated from game play when his Elder has lost all 4 HPs. The player with his Elder remaining, after having defeated all other Elders controlled by opponents, is the winner. Each player deploys his game pieces to protect the Elder, in a manner similar to pawns serving to divert attackers from checkmating their king in a game of chess. Game pieces are called Inkas. An Inka can acquire a special Orb to augment his abilities. There are 6 different kinds of Orbs. Each Orb gives its holder a unique set of capabilities. Upon acquisition of an Orb, an Inka is said to have been transformed into an Idol, who could be one of these characters (depending on the color of the Orb): Guardian, Hydra, Keeper, Ranger, Shade or Sorceress. An Idol's ability to attack or defend is endowed after he himself or a member of his troop (i.e. Inka or Elder) has declared and won a combat. Players roll an eight-sided die (D8) to generate scores for each attack or defence. These scores are modified according to the characteristics of the units involved in the combat to determine the ultimate strengths of the attack or defence. Victory is achieved when the attack strength is greater than the defence strength. The defeated game piece is taken off the game board.